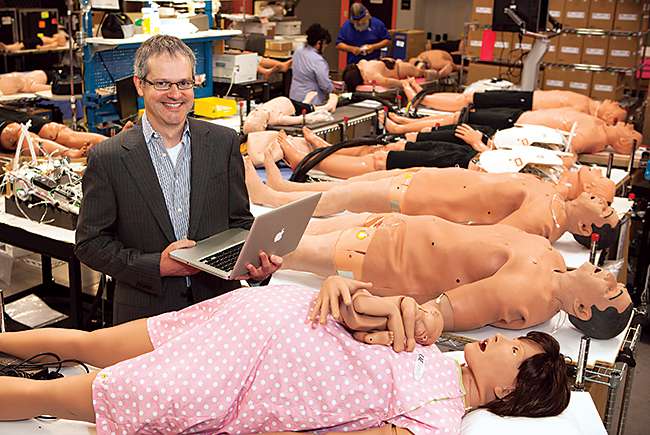 Flesh, blood and plastic: A look at patient simulators in medical training

In 2014, the National Council of State Boards of Nursing published a study on the use of mannequin-like patient simulators at nursing schools across the U.S.

Among its findings: Nursing students who replaced half of their bedside clinical hours with simulation-based training learned just as much as if they had worked with real patients. And in some cases, it said, simulation gave them more confidence because they were able to experience scenarios that would have been off-limits in actual clinical settings.

CAE Healthcare, a Sarasota maker of patient simulators, hailed the results. Although long popular in some U.S. markets, medical simulation has yet to make its way completely into the mainstream, says CAE Healthcare President Robert Amyot. He hopes the study provides the “scientific evidence” many educators are looking for to feel comfortable making simulation an integral part of their nursing programs.

The company markets patient simulators that can talk, breathe, blink and respond to medications and treatments. “We pay a lot of attention to the suspension of disbelief,” Amyot says.

The company’s first product — developed in 1994 with modeling technology licensed from the University of Florida — is a lifelike adult “manikin” built to help students simulate the administration of anesthesia. Other products now include a simulator named Lucina that lets students practice childbirth scenarios. Prices range from $40,000 to $250,000.

Five years ago, Teresa Gore, a nursing professor at the University of South Florida, helped develop international best-practice standards for using simulation in medical instruction. Under Florida law, pre-licensure nursing programs may substitute simulation for up to 50% of traditional clinical time.

Gore, who serves as president of the International Nursing Association for Clinical Simulation & Learning, says schools are trying to graduate more nurses to meet growing demand, but hospitals are limiting opportunities for nursing students to perform clinical procedures.

“A lot of hospitals won’t let students do things like administer medicine to a pediatric patient or insert a catheter into a bladder,” she says. But once nursing students graduate, she says, “they’re expected to do those things.”

“Simulation,” she adds, “is a way to transition them into safe practitioners.”

A native of New Port Richey, Chon Nguyen got Microsoft-certified as a computer expert at age 16. After high school, he passed on college and became a tech entrepreneur. In 2011, he was running an IT company that served Tampa Bay restaurants when he did a walk-through of a professional kitchen and noticed a messy recipe binder. He saw an opportunity to help restaurants go paperless and streamline operations via iPad.

Today, Nguyen’s app, called Fusion- Prep, is used at more than 300 restaurants, including Tampa-based chains PDQ and World of Beer. The app enables kitchen crews to assign prep work, print food safety labels, attach photos and training videos to recipes and distribute menu updates electronically. “Once they use it, they can’t imagine going back to paper,” says Nguyen, now 33.

Children’s fitness franchise i9 Sports of Tampa promoted President Brian Sanders to CEO. He succeeds founder Frank Fiume, who will remain as board chairman.

CLEARWATER — IT services provider Vology will expand to larger space at Bay Vista Office Park and move employees from several locations in Oldsmar. > Tech Data consolidated two sales centers outside the U.S. into one facility at its headquarters, adding about 250 local jobs.

ST. PETERSBURG — All Children’s Hospital John Hopkins Medicine will develop an $85-million, 225,000-sq.- ft. Research and education building with a 250-seat auditorium, labs and simulation space. Opening is expected in 2018. > Raymond James Financial agreed to buy Deutsche Bank’s U.S. private-client business, which has about 200 advisers with $50 billion of assets and $300 million in revenue. St. Petersburg won a bid to host the International Gay & Lesbian Travel Association’s annual convention in 2017. The event will take place at the Vinoy Renaissance St. Petersburg Resort & Golf Club.

TAMPA — The Hillsborough County Hotel & Motel Association partnered with 15 hotels around downtown and Ybor City to create a shared marketing fund to attract more visitors. The Florida Board of Governors approved USF’s plans to start a publicprivate partnership with Capstone-Harrison Street to develop a $133-million housing village for more than 2,000 students. Feldman Equities and investment company Tower Realty Partners paid $12.1 million for a 1.5-acre site, where they plan to develop a 52-story mixed-use building along the Hillsborough River. > LM Funding America, which collects debts for homeowners associations, raised $10 million in an initial public offering of stock. > Publix plans to open a grocery store on a now-vacant lot in downtown’s Channel district. Amalie Oil announced a new partnership with Lakeland-based McGee Auto Service & Tires, which will exclusively use Amalie’s motor oils at 30 locations.