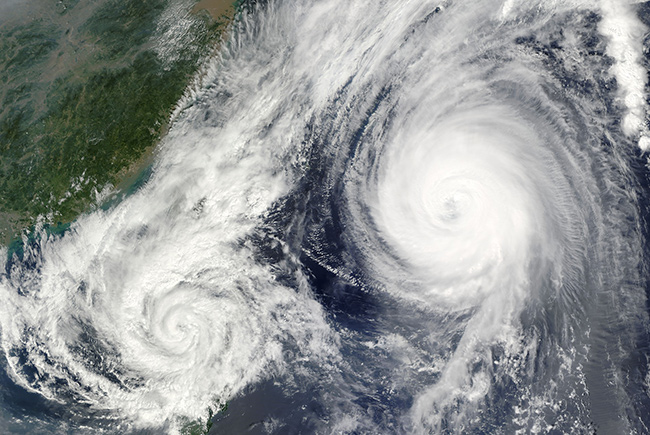 Hurricane season 2020 expected to be above average

The 2020 Atlantic hurricane season is expected to be another busy year after the already raucous 2019, according to a report by AccuWeather. The start of the season is only two months away but AccuWeather meteorologists released their predictions of an above-average year suggesting 14 to 18 tropical storms. An average hurricane season has about 12 named storms, according to the National Oceanic and Atmospheric Administration. More from the Orlando Sentinel, AccuWeather, and South Florida Sun-Sentinel.

Florida Trend Exclusive
Behind the scenes of the pandemic

An institute at the University of Florida has been working on COVID-19 research for more than a month, assisting in screening efforts and compiling data that may be useful in developing treatments or a vaccine. The Emerging Pathogens Institute, established in 2006, has more than 200 affiliated faculty members who conduct research on a variety of human, animal and plant pathogens seeking to understand how they emerge and evolve and how they can best be controlled. [Source: Florida Trend]

In some ways, policing the whereabouts of every one of the county’s 1.3 million residents would be impossible. But one technology company is grading how well each state and county in the United States is doing when it comes to social distancing. Based on data updated March 21, Florida received a B, with people traveling an average distance of almost 39 percent less when compared with pre-COVID-19 data. [Source: Orlando Sentinel]

As the spread of the novel coronavirus continues to deepen the chasm of income inequality across America, one subject Central Florida understands intimately has risen to take a more prominent place in the national discourse: Paid sick leave. Eight years ago, the question about whether to mandate that employers in Central Florida’s hospitality-driven economy offer their workers paid time off from work in the case of illness was at the center of one of the largest controversies this region has seen in recent memory. [Source: Orlando Sentinel]

Lori Collins cannot provide the feeling of wind blowing through your hair or the warmth of the sun on your face. But she can recreate sites of the outside world through 3D digital scans. Among the places her team at the University of South Florida’s Libraries Digital Heritage and Humanities Collections has scanned and turned into virtual tours are the four Native American ceremonial mounds and their surrounding parks maintained by the city of St. Petersburg and St. Augustine’s Castillo de San Marcos National Monument, the oldest masonry fort in the nation. [Source: Tampa Bay Times]

› Central Floridians staying home, heatwave could mean soaring power bills [Orlando Sentinel]
With Central Florida facing a potentially record heatwave this weekend, residential consumption of electricity is already way up as the COVID-19 outbreak forces more residents to migrate from workplaces to stay at home. Residential power bills are poised to be off the charts as March will end as among the hottest on record.

› Tampa Bay brewers offering package sales [Tampa Bay Times]
Many small businesses are being hit hard by the coronavirus, and Tampa Bay-area brewers are no exception. For now, breweries are restricted to package sales. Many still are open as local “safer at home” orders go into effect.