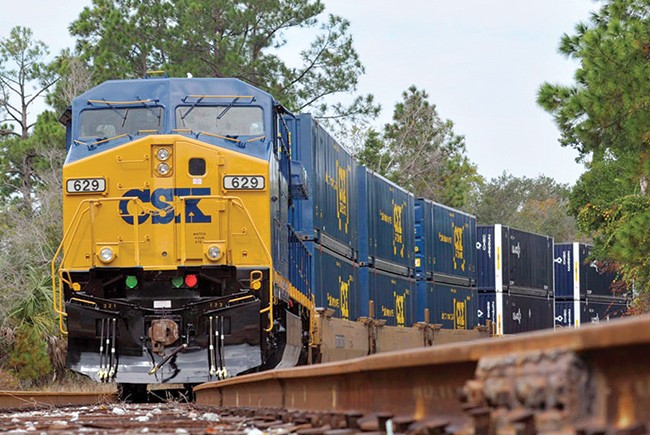 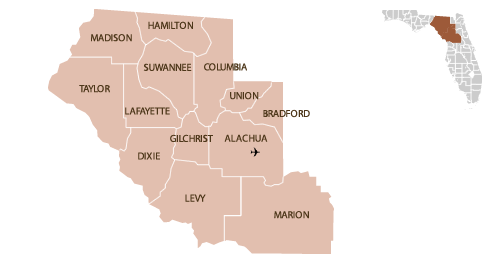 Innovation thrives in North Central, a region known for its easy accessibility and abundance of workforce talent. Home to the University of Florida, the nation’s seventh ranked public university and 19th most prolific patent earner worldwide, North Central first attracts young minds as college students, then retains them as permanent residents and entrepreneurs, helping to fuel vibrant technology and manufacturing sectors and reinforcing the region’s reputation as a great place to live. For companies in need of seamless logistics, North Central provides easy access to customers and suppliers via two interstate highways — I-10 and I-75 — and two of Florida’s busiest deep-water seaports.

University of Florida is one of the nation’s leading research institutions. According to a recent study by the National Science Foundation, research spending at UF rose to a record $865 million in FY 2018, a 7.9% increase over the previous year. So it should come as no surprise to find that Florida’s North Central region is a magnet for innovators and the technology companies they spawn.

University of Florida has been encouraging innovators and commercializing their discoveries for more than two decades. In 2018, the university consolidated these efforts under one name — UF Innovate. It includes: Tech Licensing, which commercializes discoveries; Ventures, which helps create startup companies; and two incubators — The Hub and Sid Martin Biotech — which help startups get up and running. The Hub, located in downtown Gainesville, has doubled in size since its opening in 2011 to provide a total of 100,000 square feet of office and laboratory space. Sid Martin Biotech in nearby Alachua has twice been named Global Science and Technology Incubator of the Year by the International Business Innovation Association, and its graduates have created more than 2,200 high-tech jobs since the incubator’s inception in 1995.

• Anchor Biologics, which took home the 2019 Cade Prize for its discovery of enzymes that suppress inflammatory disease. The $25,000 prize, named for Gatorade inventor Dr. Robert Cade, is awarded annually by The Cade Museum for Creativity & Invention in Gainesville where exhibits honor inventors in all fields.

• Lacerta Therapeutics, one of 18 startups based at Sid Martin Biotech in Alachua, is developing new treatments for rare and often deadly hereditary central nervous system disorders. In 2018, Massachusetts-based Sarepta Therapeutics invested $30 million in Lacerta with an agreement to license three gene therapy programs, including exclusive rights to a treatment for Pompe disease.

• To Alachua, San Felasco Tech City. The brainchild of two local CEOs – Mitch Glaeser of the Emory Group Companies and Rich Blaser of Infinite Energy — Tech City is described as an affordable live-work-play concept where seasoned companies that have outgrown their space can expand, business startups can accelerate growth and tenants/employees can live in close proximity to their work. The total development is expected to encompass 82 acres, with 300,000 square feet of space reserved for labs, offices, retail and light manufacturing.

• To Newberry, Agricultural Technology Innovation Park. Envisioned as a state-of-the-art research facility where leading research entities such as UF’s Institute of Food and Agricultural Sciences (IFAS) can develop new technologies, Agri-Tech Park will serve as an incubator for agri-tech startups bringing new products to market.

North Central is an ideal choice for companies looking to increase their logistics and distribution efficiency. I-75 bisects this region on its way north from Miami to Atlanta, and Greater Gainesville is the halfway point. Just half an hour north at Lake City is I-10, providing ready access east to Jacksonville and west to Pensacola. Also in close proximity, JAXPORT (80 miles to the northeast) and Port Tampa Bay (130 miles south).

Currently under construction by North Carolina-based Red Rock Development at Ocala/Marion County Commerce Park is Florida Crossroads Logistics Center. The $43-million project is being built purely on speculation; it has no tenants yet, but developers are optimistic that with high-profile next-door neighbors like FedEx, AutoZone and Chewy, the new 617,046-sq.-ft. center will fill up quickly.

Meanwhile, leading grocery supply chain services firm McLane Company has opened a new 400,000-sq.-ft. grocery distribution center in the Ocala International Commerce Center, its sixth such center in Florida and one of more than 80 nationwide.

Alachua County is looking to grow its logistics and distribution footprint too. Joining Sysco, Nordstrom, Walmart and Dollar General distribution centers in Gainesville is a 10,000-sq.-ft. “last-mile” delivery station where packages shipped from Amazon’s fulfillment and sortation centers are loaded into vehicles for hand-delivery to customers.

Smaller counties throughout Florida’s North Central are upgrading their logistics and distribution capabilities too:

• Under construction in Columbia County near Lake City is a rail spur that extends from a CSX-owned main rail line to the edge of what is to become the North Florida Mega Industrial Park. The 2,622-acre supersite is being developed by its landowner, Georgia-based timber giant Weyerhaeuser.

• Duke Energy Florida has selected a 5,400-acre property near Inglis in Levy County for its site readiness program, as part of an effort to attract economic development prospects in targeted industries such as food processing and general manufacturing.

Manufacturing is a growing industry sector in Florida’s North Central and not limited to any one particular product type or category.

Goods manufactured in Gainesville include medical equipment and supplies, industrial chemicals, HVAC air control devices and duct adapters and the life-saving body armor used by first responders. Exactech, a manufacturer of bone and joint restoration products with offices in the U.S., five European countries, Australia and Japan, has been headquartered in Gainesville since its founding in1965. Dozens of manufacturers have found homes in Ocala too, where they make everything from hurricane resistant glass windows and decorative fences to custom-designed stairs and walkways, fire trucks and tortilla chips.

Making news in this sector:

• Madison County-based Stahl-Meyer Foods, which has been in the business of making hot dogs and cold cuts since 1863, has signed a five-year contract with the Jacksonville Jaguars to provide food at the team’s TIAA Bank Field.

With plenty of sunshine and wide-open spaces, six North Central Florida counties have been singled out for solar energy development by two power companies serving the region.

Now, in keeping with its goal of establishing 14 universal solar power plants and adding 700+ megawatts of solar power across the state by 2023, Duke will add two more facilities in North Central. The Trenton Solar Plant on 580 acres in Gilchrist County is expected to begin operation in December 2019, with the Columbia Solar Power Plant in Columbia County near Fort White to follow in March 2020. Each will generate 74.9 megawatts of power.

Also looking to capture power from North Central’s sun is Florida Power & Light (FPL). Of the 18 FPL solar plants currently operating across Florida, two are in North Central: Horizon Solar Energy Center, which opened in 2018 to serve Alachua and Putnam counties, and Sunshine Gateway Solar Energy Center, located in Columbia County near the intersection of Interstates 10 and 75 in January 2019.

North Central is served by multiple hospitals and many are expanding:

• In Marion County, Ocala Health continues a $56-million expansion at Ocala Regional Medical Center in 2019 with the opening of 34 beds dedicated to neuro services and 34 more beds in a new, dedicated cardiac unit, bringing the facility’s total bed count to 290.

• Renovations planned for UF Health Shands Children’s Hospital include the addition of a pediatric preoperative area and a postoperative recovery unit designed exclusively for children.

The jewel in North Central’s academic crown is, of course, the University of Florida, one of three designated “Preeminent State Research Universities” by the Florida Board of Governors and a catalyst for research and economic development. In FY2019, UF received $776.2 million in research funding, 68% of which came from the federal government.

• Central College of Florida offering associate and bachelor’s degrees and certificate programs at its main campus in Ocala and its Levy County campus in Chiefland. CF’s Ocala campus is also home to The Appleton Museum of Art.

• North Florida College with campuses in Madison and Live Oak, offering a B.S. in nursing as well as numerous associate degrees and certificate programs.

• Santa Fe College in Gainesville, winner of the 2015 Aspen Prize for Community College Excellence and home to a teaching zoo, maintained and operated by the more than 200 students enrolled in the college’s premier Zoo Animal Technology Program.

Plenty to Enjoy Outdoors and In
North Central’s 13 counties offer plenty to see and do. Visit Florida’s newest state park, Gilchrist Blue Springs, then take a walk on the wild side at Ocala National Forest (watch out for bears!). And do make time for a visit to Cedar Key, a quaint old Florida fishing village on the Gulf of Mexico in Levy County where a stop at Tony’s for a bowl of his award-winning clam chowder is worth the drive.

And of interest at or near UF: The Florida Museum of Natural History; the Samuel P. Harn Museum of Art; the Cade Museum for Creativity & Invention; and a whole bunch of Gator sports, including baseball, basketball, football, gymnastics, soccer, swimming, tennis, track and field, volleyball and lacrosse.

A Great Place to Live and Work
Business owners looking to hire eager young workers will find them in North Central. The millennial talent pool in Alachua County is nearly 50% greater than the national average, and the unemployment rate here hovers at around 3.5%.

The website Livability.com consistently names Gainesville to its annual list of the “Top 100 Best Places to Live” nationwide, citing affordability and access to education among the contributing factors to its selection. In 2018, Gainesville was No.9 on Livability.com’s “10 Best College Towns” for its mix of arts and culture, outdoor recreation and nightlife, in addition to the University of Florida’s educational amenities.

Real Horse Capital of the World
When people think of horse farms, they typically picture Kentucky — when they should be seeing Florida. Marion County has long called itself “Horse Capital of the World,” and in 1999, the U.S. Department of Agriculture agreed to make that title official. With close to 600 horse farms, breeding and training facilities spread across 700,000 acres, the horse business is big business here … and it’s about to get even bigger as the World Equestrian Center takes shape in northwest Marion. While the full development, including indoor and outdoor arenas, a five-story hotel, some 525,000 square feet of commercial space and 2,400 homes, won’t be complete until 2021, the competition facilities are expected to open in late 2019.