An expiring sales tax exemption could have a devastating impact on the state economy, according to new analysis by Florida TaxWatch. Florida manufacturers are exempt from paying taxes on machinery and equipment purchases, but unless lawmakers take action this spring that exemption will disappear, threatening the state’s manufacturing sector. 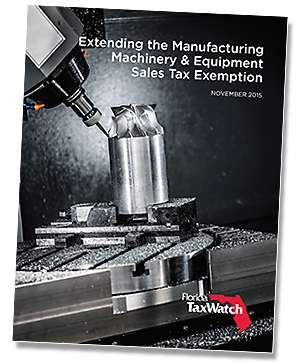 “Florida’s manufacturing sector is vital to diversifying the state economy, and provides high wage jobs and a stable income stream,” said Dominic M. Calabro, President and CEO of Florida TaxWatch. “The manufacturing machinery and equipment sales tax exemption incentivizes the growth of the manufacturing industry and helps make Florida competitive with other states.”

“The manufacturing sales tax exemption is working to boost the state’s manufacturing sector,” said Steve Petty, Chief Economist for Florida TaxWatch. “Allowing the exemption to expire would put Florida further behind in manufacturing and could hinder our state’s efforts to diversify the economy and ensure Floridians have access to high-skill, high-wage jobs.”