Learning from A Land Remembered

Each year, Florida Trend devotes its April issue to the Economic Yearbook, the edition you are reading now. We examine the state, county by county, noting population gains, company relocations, construction projects and other business trends.

Through the decades, this issue in particular has become a chronicle of the waves of growth that have surged through Florida. When Florida Trend opened 50+ years ago, Florida’s population hadn’t quite reached 3 million. Next year, we are expecting to hit 20 million and to reach 21 million before the 2020 Census.

This year’s report is very upbeat — economic development officials and businesspeople around Florida are more optimistic than at any time since the recession, reporting new technology hubs, corporate headquarters and infrastructure projects. Construction cranes again dot the sky.

The pace of growth is fast enough in some places that businesses even report a lack of qualified workers to staff expansions — highlighting the importance of workforce training.

This issue also allows us to reflect on Florida’s history, specifically what  growth has meant for water, roads, schools, the environment and the way of life we enjoy. 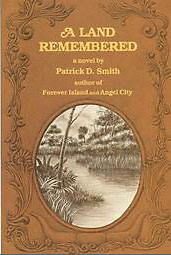 Last year, a friend at Mosaic Co. gave me the book “A Land Remembered,” which I’d heard much about but had never read. The author, Patrick Smith — nominated three times for the Pulitzer Prize — was the subject of this magazine’s “Florida Icon” profile last September.

The book sat on my shelf for several months until this January, when Smith died at 86. Picking up the book, I quickly saw why it is a best-seller and required reading in many schools.

The book is an epic tale of three generations of the fictional MacIvey family, based in part on research and tales told to the author. The story begins as

Tobias, his wife, Emma, and their young son Zech travel south out of Georgia in 1858 on a horse-drawn wagon, homesteading in central Florida near present-day Gainesville.

The travails of a pioneer family might seem strange to some of us today — scarce food, wild cows, rattlesnakes, bears, alligators and the beauty of untamed land. No boundaries or fences. A few scattered trading posts days away.

But Tobias is a friendly sort. He befriends the Seminole Indians. He befriends a freed slave. He drives cattle to market, pockets gold doubloons and purchases land at 15 cents an acre. Slowly he builds a life of cattle and oranges.

Zech grows up to expand the family holdings into tens of thousands of acres in the late 1800s, and his son, Sol, then uses the MacIvey savvy to follow the Florida dream as a rancher, grower, land baron and developer in the 20th century.

Fast forward to the 1960s. Sol isn’t happy at the end of his life. He has followed the path to riches. But he has left his values behind. For solace, he passes his final days in an old pioneer cabin rather than in the oceanfront mansion he could afford.

The book raises the eternal Florida question: While building a state of commerce and tourism, can we also protect our heritage? Can we let wild waters flow? Can animals roam? Can native plants blossom? We have the ability, but do we have the will?

Fitness update: 2014 started cold, which curtailed my running to twice a week, so I need to step it up. The gym has been an infrequent friend. But at least I’m consistently under 10 minutes per mile.