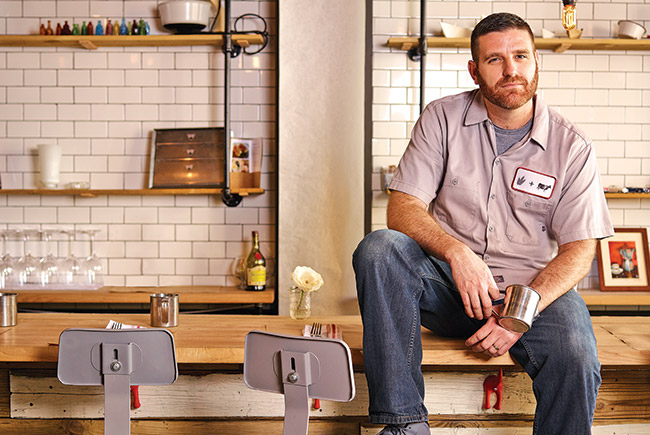 Judging by the amounts of rough wood, chalkboards and pork products in Miami's poshest neighborhood, the Gastro Revolution is now complete.

The move to robust artisan food started 10 years ago when energetic British chefs rebelled against fancy fussy gourmet cooking and devoted themselves to elevating the humble foods of pubs and bars. Chefs in semi-tropical Florida facing a tough economic market soon followed with small places and small plates.

The food is as carefully made as in any gourmet restaurant and more carefully sourced. This cuisine is heavily local — often with a strong Deep South accent — but it can also be as rustic as any peasant cuisine from Europe, Asia and the Americas, including Cuban and Spanish.

Across the street is the less Spanish but unabashedly pork-centric Swine Southern Table & Bar. Farther up Ponce De Leon heading into downtown is the Eating House, where Giorgio Rapicavoli may put ham croquetas in a Vietnamese banh mi sandwich.

All this in a year in one corner of Miami, yet the movement stretches across the state and back more than five years. Some restaurants that led the charge, such as the Ravenous Pig in Orlando, Michael’s Genuine in Miami and Pane Rustica in Tampa, are established Golden Spoons and tough tables to get.

Meanwhile, once-lowly food trucks have driven into the finest hotels, inspiring the bar menu at the grand old Breakers in Palm Beach and setting the curriculum for the private cooking classes at the Ritz-Carlton on Amelia Island.

A key feature of the gastro movement is the eateries’ pickiness about ingredients. They scramble for as much farm-to-table product as they can find and seek the most authentic imported goods. Where needed, chefs grow their own peppers, herbs and squash blossoms: Pelagia at Tampa’s International Plaza has tilled a hydroponic garden on the hotel roof for a year.

Steaks are still a main course, but the fashion in meat has swung to lamb, beef short ribs, game, and, of course, pork, from ham to cheek. Besides ceviche, the hottest seafood is octopus. A full spectrum of vegetables from parsnips to kale is more crucial than ever. And the cooking process is evident in everything: Meat, vegetables, even salads and desserts are not just seared, but roasted, braised, charred, blistered and burned. While simpler food lowers entrées to less than $20, hand-crafted mixology and artisan spirits have pushed cocktails closer to $15. And there is always craft beer, more every day.

White tablecloths and grand plans aren’t dead, however. Darden has opened glamorous Eddie V’s Prime Seafood in Tampa and Orlando, and Miami has the grand new Lippi and Cipriani from Venice. Our grandest hotels and top chains continue to grow.

Floridians can eat higher on the hog than ever.