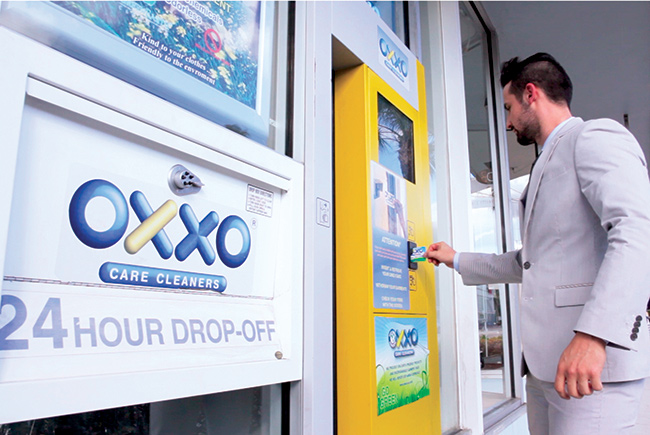 OXXO Care Cleaners has an ATM-style window for pickups and dropoffs.

A new approach to dry cleaning in South Florida

Salomon Mishaan in 2000 tried a new concept for dry cleaning with his Hollywood-based OXXO Care Cleaners: Open-air stores, 24/7 service via an ATM-style pickup/dropoff and a GreenEarth liquid silicone solvent. He also has a phone app for scheduling pickups, delivery, tracking tickets and paying.

Mishaan says dry cleaners haven’t innovated in half a century and still use steam presses that burn clothes and perchloroethylene that leaves a smell and fades colors. GreenEarth is a liquefied silicone — think liquefied sand — that he says is non-hazardous and non-toxic, breaking down into sand, water and carbon dioxide if released to the environment, leaving no “dry cleaning” smell. He has three company-owned stores and 57 franchisee stores domestically and in Indonesia. Expansion plans include Florida, Texas, Georgia and the northeast U.S. and Latin America.

(classes A and B, 2nd quarter)

(classes A and B, 2nd quarter)