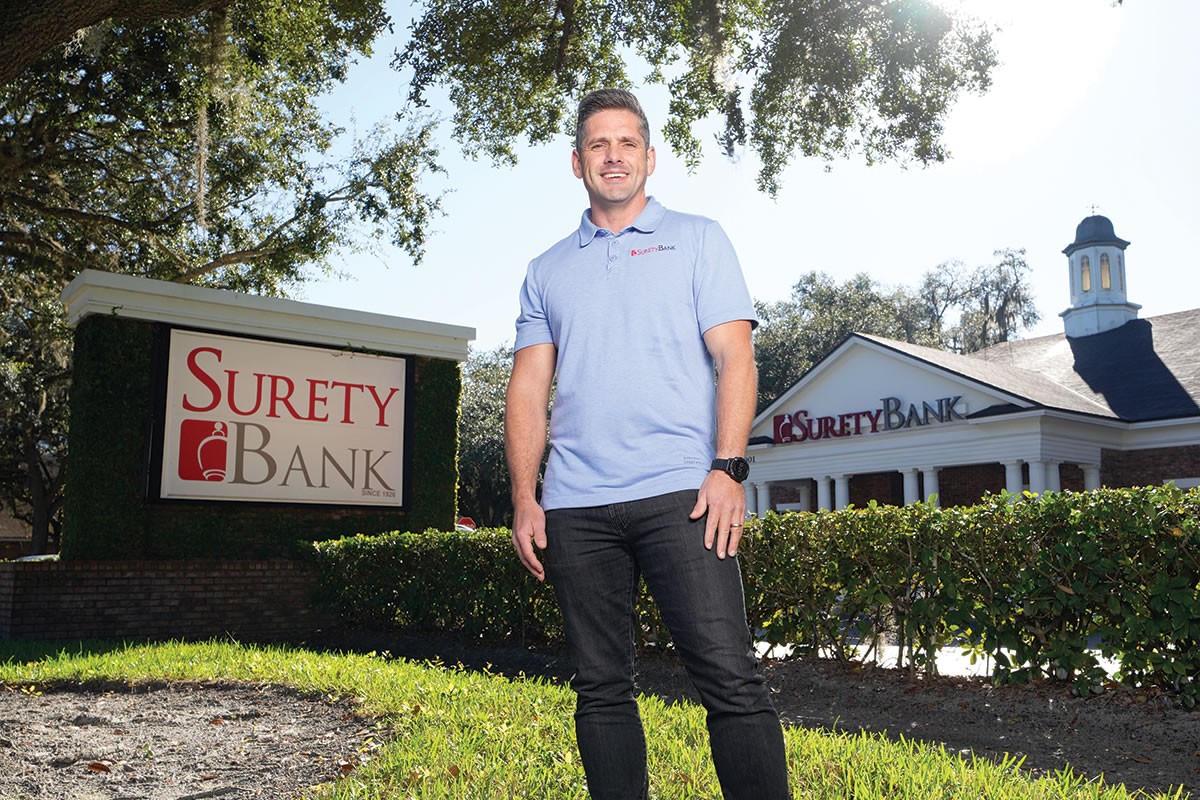 EDUCATION: Bachelor’s degree in finance and real estate from Florida State University in 2001

GROWING UP: James’ family worked in the fern industry in Pierson in Volusia County, and he spent his summers digging irrigation ditches, maintaining diesel engines and clearing land. “You know the fern in rose arrangements, the dark green fern? That’s either grown here (in Volusia County) or Costa Rica — those are the only two places in the world,” James says.

EXPERIENCE: James had planned on a career as a stockbroker, but an internship at stock brokerage firm soured him on the profession. At the suggestion of his father, a shareholder and director of Surety Bank, he decided to try banking. Shortly after he started, the bank’s CFO had a heart attack, and James was thrown into the role. “It was trial by fire, right then and there,” he says.

GENERATION GAP: When James was promoted to CEO of Surety Bank in 2009 at 30, he was the youngest bank CEO in Florida. After 12 years, he says he still “sticks out” at banking conferences. He says the old-guard banking executives tend to “complain about the same things they have for the last 20 years” — regulations and credit unions. “I don’t have time to focus on them,” James says. “I have to do what we do best.”

When Ryan James took the reins as CEO of Surety Bank, a small community bank in DeLand, in 2009, he planned to focus on marketing and growth.

The Great Recession upended all that. Regulators charged off 20% of the bank’s capital because of what it said were bad loans. What followed was a three-year tussle between federal regulators and James, then 30 years old and the youngest bank CEO in Florida. James says he tried to work with his customers to restructure loans, but the regulators seemed intent on having him foreclose on properties to get the loans off the books.

“Every six months,” James says, the regulators came to the bank “reviewing the same loans over and over again for like three years while we were under a consent order.”

By 2012, the financial storm had passed, but James decided that Surety needed to diversify its portfolio beyond commercial lending and certificates of deposit.

Almost perversely given his experience with the feds, he decided to explore a niche in providing banking services to a sector of companies that was under heavy regulatory scrutiny: Socalled money services businesses, such as check-cashing firms and payday lenders.

At the time, those money services firms faced scrutiny for two main reasons: Some had been accused of exploiting customers with their business practices. Regulators also were concerned they were at higher risk of being used in money laundering and terrorist activities.

In 2013, the U.S. Department of Justice launched Operation Choke Point aimed at combating consumer fraud among money services companies by “choking out” access to banking and payment processing services by fraudulent businesses. Payday lenders, however, saw a different motive, claiming in lawsuits that the federal government was simply trying to shut down an industry that wasn’t in political favor — regardless whether individual businesses had broken the law or not.

Despite the potential for regulatory friction, James saw opportunity. Most banks, rather than adopting compliance programs to monitor potential problems, had simply stopped doing business with the money services firms.

James says he sympathized with the money services firms — “because they were being treated the way I was” by the FDIC. He set up a special department within Surety Bank to underwrite, monitor and provide banking services to the industry. He says he got some pushback from regulators, who “just kept throwing out new hurdles. We were doing more than the regulations stated, but then they would want to add on to it.”

Initially, Surety worked just with local check-cashing companies, but as the bank learned more about its customers and how to handle operational risks, it expanded its services across Florida and eventually to other parts of the country.

Having found a profitable niche, James led the bank into providing services to other hard-to-serve industries, including medical marijuana companies and crypto businesses, such as bitcoin ATM operators.

In the case of the cannabis businesses, banks have been reluctant to work with marijuana companies because selling cannabis remains illegal under federal law.

While most banks avoid banking with marijuana companies because they’re afraid of reprisals from banking regulators, James says he isn’t worried. For one, no governmental agencies are actually enforcing the “antiquated” federal laws. Beyond that, Surety has cobbled together its own set of best practices to grapple with the conflicting legal landscape. “The Florida Office of Financial Regulation has pretty stringent money services regulations, so we use this as a baseline and then add additional state or federal laws to our minimum standards,” James says.

Cryptocurrency-related businesses have faced similar hurdles in establishing banking relationships. One bitcoin ATM operator told Florida Trend that it went to 460 banks before it found an institution willing to let it open a bank account. During the firm’s early days, employees often hauled around $200,000 worth of cash in garbage bags.

James says money services businesses undergo a stringent application process before Surety will take them on — and transparency is a must. At the end of the day, he says most of the compliance comes down to knowing his customers, watching for unusual activity and having software and procedures in place to vet transactions.

James says he’d like to see more stringent compliance standards in the cryptocurrency industry. To that end, he is a founding member of the Cryptocurrency Compliance Cooperative, a Washington, D.C.-based organization that aims to establish universal standards and best practices to regulate the “cash-to-cryptocurrency” industry.

Bitcoin ATMs — there are 42,000 across the country — have become an attractive option for criminals to launder money from drug trafficking and other illicit activities, with some crypto machine operators allowing transactions with consumers who provide nothing more than their phone numbers.

Bolstering standards will help root out bad actors, legitimize the industry and give banks the tools they need to ensure the digital currency is safe for investors and businesses, James says. He believes regulators will create regulations, “and they’re going to push that responsibility down on ultimately banks and the exchanges to do the right thing to monitor,” he says. Surety, he believes, will have an advantage by having already developed methodologies to monitor transactions.

Regulatory uncertainties notwithstanding, the new lines of business have been good for Surety Bank’s bottom line. It ranked second among Florida’s 98 banks and thrifts as of the end of the third quarter of 2021 with a 2.68% return on average assets — a key indicator of bank profitability — and James says it has helped the community bank grow its customer base beyond Central Florida. “We look at those industries as our communities. We’re not bound by geography. We have a national community.”

Surety makes its money off compliance and transaction fees, which vary. “For cannabis, we charge a monthly compliance fee and cashhanding fees that float with volume. For the crypto industry, we charge a percentage of volume, as this correlates to increased compliance and monitoring,” James says. “We really keep our fees reasonable as we don’t feel it is right to take advantage of the current climate.”

Whether Surety can maintain its edge as laws evolve is an open question. The Secure and Fair Enforcement Banking Act — which would prohibit penalizing banks that do business with marijuana companies — has passed the U.S. House of Representatives five times, most recently as an amendment to the 2022 defense spending bill, only to be scuttled by the Senate.

If it passes, James predicts it will open the floodgates to a lot of competition. “You will see all major payment networks, megabanks, etc. swooping in and acting like they were helping all along,” he says.

TECH TRANSITION: These days, banks can lose money on free consumer checking accounts, says James. Part of the problem, he says, are the fees that many bank system software providers charge banks for must-have services such as online banking, bill paying and mobile banking. To solve the problem, he ditched the bank’s legacy software provider and went with Jacksonville-based startup Nymbus, which transitioned Surety to a private cloud-based software and provided greater flexibility in services and pricing.

FILLING A VOID: When BB&T shuttered its branch in Pierson (population 1,913) in 2019, town officials scrambled to find another bank to take its place. Surety Bank answered the call. “A lot of people in the community need to be able to cash their checks on Friday. They were really appreciative,” James says. “A lot of our transactions happen at that little branch.”