Skyrocketing prices dash dreams of owning waterfront property for many 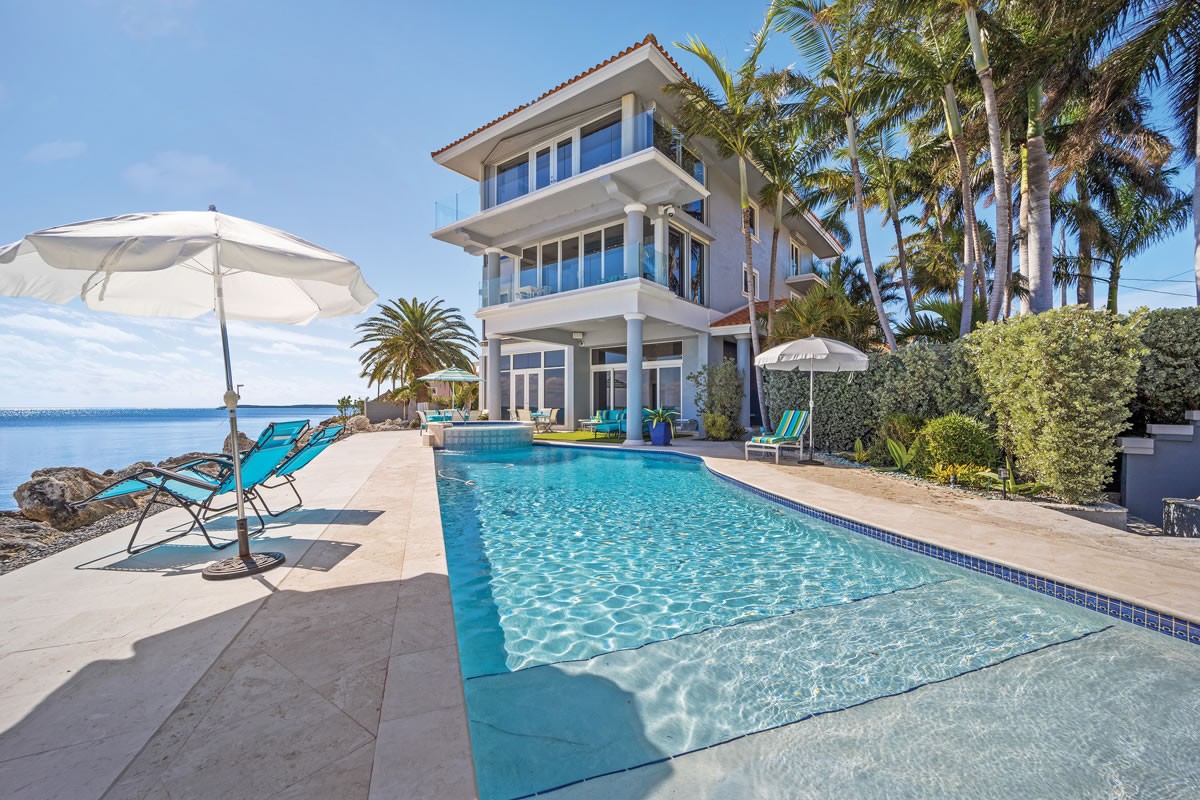 While many come to Florida dreaming of a home on the beach, starting prices for waterfront property have gone through the roof.

Florida Trend canvassed real estate agents and property listings to see what it costs to live on the water in Florida these days. The cheapest beachfront house we found was on Alligator Point in Franklin County in Florida’s Big Bend. The one-story, 925-sq.-ft., two-bedroom Cape Cod-style house was built in 1947 on a quarter-acre lot. List price: $479,000. Other beachfront properties ...

“Business is phenomenal, I would have to say,” says Brian Schmitt, a broker at Coldwell Banker Schmitt Real Estate in Marathon. In the Keys, listings aren’t about “beachfront,” they’re about “open water.” Schmitt says the average “open water” sales price in the last year is up 113% to $1.916 million.

Schmitt says Keys real estate is a deal. “You can find a nice home in the keys for $2 million you would never dream to find in Miami Beach or Coral Gables or Naples,” he says.

The price of entry for single-family starts around $20 million. The likely spot is Golden Beach in the north county (starting at $25 million) and a development called Altos Del Mar on Miami Beach ($20 million).

For condos, newly built units start at $2,000 to $2,500 per square foot. A premium unit in a new building easily can fetch eight figures. For older buildings, prospective buyers took pause after the 12-story Champlain Towers South collapse killed 98 last June. At the least, buyers want assurances that maintenance and reserves have been kept up. Even then, an ocean-facing, beachfront tower unit in an older condo building like Crystal House generally starts at $500,000, Tansey says. One-bedroom units in a new condo building, like 87 Park, start at $3 million.

The pandemic discouraged tower living with its lobbies, group elevator rides and common areas. Consumers put a premium on single-family homes. “They’re rediscovering the joys of living in a house,” says Craig Studnicky, CEO of RelatedISG Realty in Miami. The trouble is that inventory last fall was half what it was a year earlier, and the price per square foot had doubled in three years. The average price per square foot for a condo, meanwhile, held steady, Studnicky says. “Condos are such a great value by comparison,” he says. For new construction, figure $1.5 million at a minimum, Studnicky says.

More luxury real estate, shopping, dining options and lifestyle have made Fort Lauderdale and Broward an attractive alternative to Miami-Dade for more than just boaters. “Fort Lauderdale has matured,” says Darin Tansey, executive director of sales for Douglas Elliman in Miami. Like everywhere, the issue in Broward is availability. Inventory in the third quarter was down 47%.

In the famed Town of Palm Beach, a beachfront single-family home runs well into the eight figures. A seven-bedroom, 7,686-sq.-ft. estate house — built in 2020 facing the ocean to the east and the Palm Beach Inlet to the north — listed for $79 million last year.

South of Mar-a-Lago and Sloan’s Curve, the condo towers start appearing, and prices come down. “Can you live on the ocean for under $500,000 in northern Palm Beach County? Absolutely, but it will be a condo, and the best deals will be on Palm Beach island,” says Kevin Dickenson of Berkshire Hathaway HomeServices Florida Realty in Jupiter.

The condo buildings south of Sloan’s Curve are older — built in the ’60s and ’70s. “A lot of the buildings will have special assessments for repairs, and the big one is concrete restoration,” Dickenson says. “When condos have big special assessments, this will generate sellers. Lenders look at the financials as part of the approval process. If a condo does not hold 10% of the budget in reserves, you cannot get 80% financing.”

“There’s such a small supply on the market,” says Mike Dodge, director of education and market research for John R. Wood Properties. Some buyers moving to Florida have elected to purchase “placeholder” homes — just to have a place to live — while they wait for a home that better suits their needs to come on the market.

The most inexpensive homes in Marco Island are one-bedroom condo units, says Mike Dodge, director of education and market research for John R. Wood Properties. The cheapest available as of Oct. 21, 2021, was listed for $589,000 in October. The lowest-priced available single-family home, built in 2021, listed at $9.5 million for 4,856 square feet.

The top of the market in Southwest Florida has seen a measurable increase in buyers from California and other western states in addition to the traditional buyers from the Midwest, Dodge says.

Housing prices come down as you move north from Naples to Fort Myers. An 11thfloor, two-bedroom, beachfront, beach-facing condo in Bonita Springs had a $1.5 million asking price last fall. The highest sales price for a condo in Bonita Springs in the last year was $3.3 million. A five-bedroom, single-family house built in 2015 in Barefoot Beach listed for $9.975 million.

Fort Myers Beach is the nearest thing to a budget beach in Southwest Florida. At the low-end, a one-bedroom, 652-sq.-ft. condo dating to 2004 was listed at $300,000 last year. The highest sales price for a Fort Myers Gulffacing condo in the last year was $925,000.

The single-family market has a narrow range. A two-bedroom, 792-sq.-ft. house built in 1937 was listed for $2.3 million, the lowest price as of Oct. 21 for beachfront single-family. The highest price in the last year for a single-family house there was $3.8 million.

Listings in October were non-existent on Sanibel Island — in the last year, the high price for a condo was $2.4 million and for single-family was $6.5 million — and limited on Captiva Island. A two-bedroom condo facing the Gulf — but with a rip-rap seawall, not a sandy beach — was listed for $1.7 million. A six-bedroom single-family house listed at $6.5 million. Captiva’s records last year were $1.16 million for a condo and $17.15 million for a single-family house.

“We are getting more of the wealthier buyers than we did before,” says Bev Murray, a broker-associate at Berkshire Hathaway HomeServices Florida Realty. Billionaires who traditionally stuck to Naples now look in Sarasota. “We always have been undervalued compared to Naples. We’re still actually a really good value.”

In the Sarasota area, Bradenton Beach has lower-priced condos than other areas, but the $500,000s are still typical. New condos and those of recent vintage start at $5 million.

For single-family homes, Casey Key has more houses than most. Typically, they are Gulf-to-Bay properties ranging from $14 million to $20 million and offer the advantage of the beachfront view and a place to dock a boat.

Northeast Florida’s beaches are drawing buyers from new areas — California, Colorado, Texas — and from traditional markets such as New York and Atlanta, says Ann King, president and broker of Berkshire Hathaway HomeServices Florida Network Realty in Ponte Vedra. Buyers are still working. They cash out of their homes up north, establish Florida residency and commute back to their companies’ main bases from time to time but otherwise work remotely. The ability to do things in Florida throughout the pandemic has appealed to many. More seem to be forgoing South Florida in favor of the Northeast’s three seasons and lower prices. The entry-level price point for an oceanfront condo where “you’re seeing the waves crashing” is around $650,000, probably in Flagler Beach. For single-family homes, the starting point is around $2 million. The market has slowed a tad but remains strong, King says. “If the right property comes on the market, there are still a handful of buyers ready to jump. We need inventory,” King says.

Condos in Miramar Beach and Destin range from $649,900 for a two-bedroom beach-facing unit in Destin to $4.5 million for a five-bedroom penthouse unit on Miramar Beach. Vladimir Babich of Coldwell Banker in Destin says most of the condo market inventory features two-bedroom units. A five-bedroom, 4,558-sq.-ft. beachfront single-family house in Destin was listed for nearly $5 million, which is about the entry point for a single-family house.