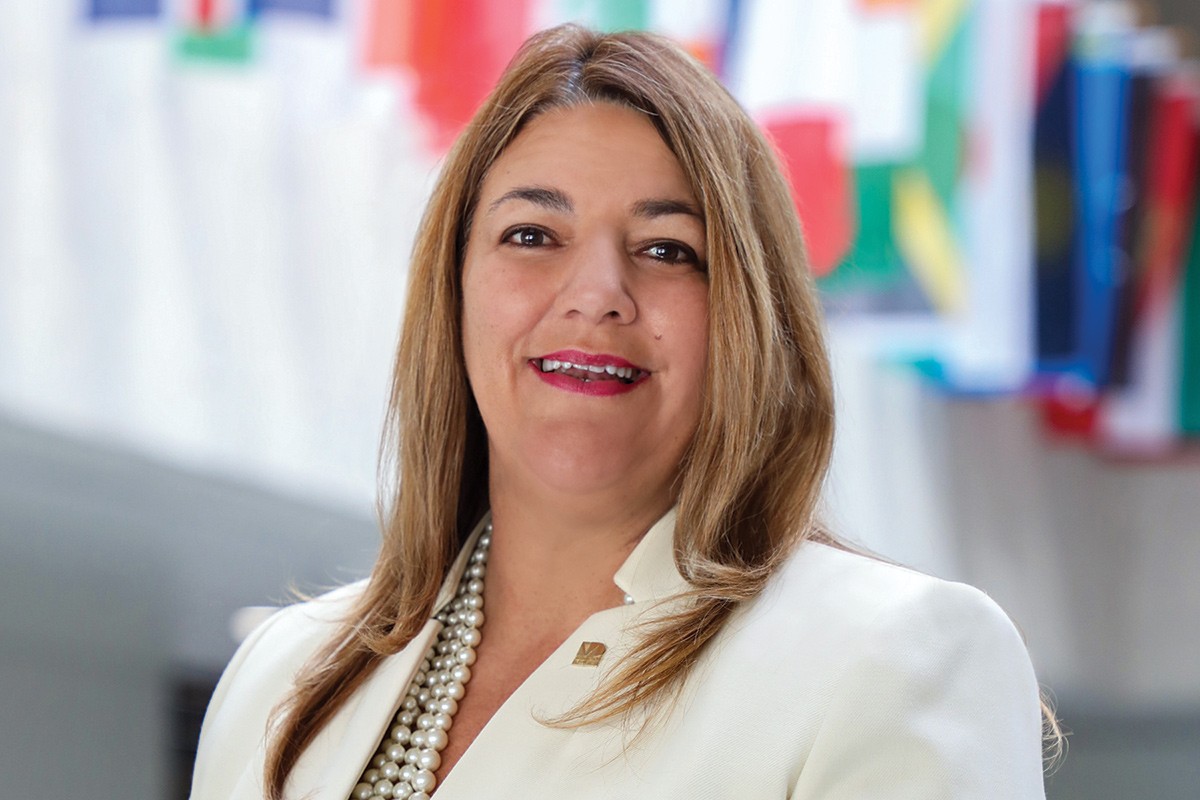 'A Path to Mobility’

Miami Dade College’s first woman president is a graduate of the school and played basketball there.

Born and raised in Hialeah, Madeline Pumariega stayed close to home after high school, getting her associate’s degree at Miami Dade College and playing on the women’s basketball team there in 1986-87.

The daughter of Cuban immigrants, she initially thought she’d follow her dad into banking but felt drawn to a career in higher education. For several years, she worked at a local bank and coached women’s basketball.

“I loved working with students and seeing the difference I could make,” says Pumariega, who has a bachelor’s degree from St. Thomas University and a master’s from Florida Atlantic University. She is currently a doctoral candidate in higher education at Barry University. “College is not the only path to success, but it certainly is a proven path to economic and social mobility.”

Pumariega began her career at MDC as an academic adviser on the Kendall campus, eventually working her way up to head of the Wolfson campus. In 2013, she left MDC to take on statewide leadership roles, serving as CEO of Take Stock in Children, a Fort Lauderdale-based non-profit that provides mentoring and college scholarships to low-income students in Florida, and then as chancellor of the Florida College System, a network of 28 community colleges and state colleges.

She was provost of Tallahassee Community College last fall when she entered the running for president of MDC. She says a desire to be near family in Miami played a key role in her decision after the recent death of her mother.

In January, she took over as president of MDC, one of the largest and most diverse undergraduate institutions in the U.S. with more than 110,000 students. She succeeds Rolando Montoya, the school’s interim president for 16 months, and Eduardo Padron, who retired in 2019 after leading MDC for nearly 25 years.

So far, Pumariega’s tenure has been dominated by the coronavirus pandemic. She recently oversaw the launch of MDC Live, enabling students and instructors to meet and interact remotely by webcam on scheduled days and times; worked to secure vaccination appointments for MDC employees 65 and older; and created scholarships for students to boost enrollment. Last fall, enrollment at MDC was down about 12% from pre-COVID levels, though that decline had been cut in half by the spring, when student rolls were down 6.5%.

“Many of our students are the first in their families to attend college. Many are eligible for Pell grants, and they need to work,” she says. “Others had underlying health issues or were taking care of kids or family. It was important to offer financial support for those who wanted to come back and reinvest in their education.”

As economic developers and government officials try to attract more technology companies to Miami, MDC is partnering with Amazon, IBM and Google on specialized courses to train students for jobs in cloud computing, artificial intelligence, cyber-security and related fields.

“I think the college is well-positioned, and the way we’re doing that is listening to business and industry. What do they need in terms of talent, and what skills do our students need,” Pumariega says. “There’s an excitement in Miami that’s palpable, and Miami Dade College is sitting at the center of it.” — Amy Martinez

Growing up in the suburbs of Chicago, Kathleen Plinske knew she wanted to go to college, but she also knew she’d have to find a way to pay for it. When she was 14, she landed a spot at the Illinois Mathematics and Science Academy, a publicly funded residential high school program known for churning out talent. (Alumni of the program include YouTube co-founder Steve Chen, PayPal co-creator Yu Pan and Yelp co-founder Russell Simmons.) A physics teacher at the academy encouraged Plinske to apply to Indiana University, where she earned a full, four-year scholarship. She went on to earn a bachelor’s degree in physics and Spanish and landed her first job as an instructional media specialist at her hometown community college, McHenry County College in Crystal Lake, Ill. In 2009, Plinske, then 29, was named interim president of the college. She left that job a year later to join Valencia College, where she serves as executive vice president and provost and as campus president of the Osceola, Lake Nona and Poinciana campuses. In July, she will become the college’s fifth president.

Harnessing Data: “One of our latest additions is the Central Florida Education Ecosystem Database, which has student data from both the Orange and Osceola County school districts, Valencia and UCF. We’re able to study our students, looking at the classes that they take as early as elementary school, middle school and high school — and then, based on students’ different pathways, the likelihood they will enroll at Valencia or UCF and be successful.”

COVID Concerns: “When we made our decision to convert our classes online it was important to allow students to not be academically or financially penalized if they were unable to complete their classes. We developed a grade type that we ended up calling the R-20: ‘R’ stood for retake and ‘20’ was the year 2020. Basically, students could elect the R-20 option for any classes in which they were enrolled in last spring: We’d allow the student to retake the course at no cost. Even though the R-20 grade showed up on their transcript, it did not affect their GPA. It didn’t count as a course attempt. We had just under 7,000 students elect to take the R-20 grade in spring and of those, 78% retook an R-20 course. I consider that a tremendous success.”

Enrollment Trends: “I would generally classify our enrollment as flat, which is actually a remarkable success story because we are hearing from a number of institutions across the country that are seeing double-digit declines in enrollment. The one area where we are concerned is that we saw a significant decline in the number of new students that started at Valencia, particularly in the fall. We had about 1,100 fewer high school graduates who started this fall compared to previous years.”

Debunking Myths: “Oftentimes, I’ll do community presentations, and I’ll ask, ‘How much do you think a degree from Valencia costs?’ The most common answer that I hear is $50,000, and so I’ll say, ‘Well, actually, the tuition cost of a (two-year) degree is in the ballpark of about $6,000,’ and then talk about the availability of federal financial aid, scholarships that we have. About 40% of students at Valencia actually pay nothing out of pocket for tuition for their entire degree program.”

Lifelong Learner: In addition to her undergraduate degree, Plinske has earned a master’s degree in Spanish from Roosevelt University in Illinois, a doctorate in education from Pepperdine University in California and an MBA from University of Florida. When she spoke with FLORIDA TREND this spring, she was finishing up a master’s degree in industrial and system engineering from UF. “I absolutely thrive on learning in different discipline areas,” Plinske says. “I’m really interested in understanding what are the tools and ways of thinking that engineers typically use that we don’t often apply in higher education. If we look at a problem in a different way, through a different lens, we might see a different solution.”

Thrasher, 77, took the reins of FSU in November 2014 following a political career that included a stint as Speaker of the Florida House of Representatives and five years in the Florida Senate. Under his leadership, FSU exceeded its $1-billion fundraising goal and boasted of having the best four-year graduation in the state at 74%. It also attained a top 20 slot among national public universities in U.S. News & World Report’s annual rankings.

Thrasher also guided the school through difficult moments, including the death after a night of hazing of an FSU fraternity pledge in 2017 and a shooting in the school’s library in 2014 that injured two students and one employee. Over the past several years, Thrasher has been a vocal opponent of legislation promoted by gun rights supporters that would allow people with concealed-weapons licenses to carry firearms on campuses. In his 2020 address to FSU’s faculty senate, Thrasher vowed to continue fighting so-called campus carry measures.

When he announced his plans to retire last fall, Thrasher called being president of FSU the “best job” he’d ever had but said he looked forward to a future where he could focus on his family and pursue other interests. Thrasher has promised to stick around until his successor is found.

A Harvard-trained mathematician, O’Shea joined New College in Sarasota in 2012 after serving as the dean of faculty and vice president of academic affairs at Mount Holyoke College. During his almost nine years in the role, New College garnered $9 million in public funding to increase its enrollment to 1,200 students and boost four-year graduation rates by 2028, the university said. O’Shea also secured state funds to build an addition to the Heiser Natural Sciences Complex, helped launch a master’s program in data science and oversaw the creation of a five-year, dual-degree program with the University of Florida that allows students to simultaneously earn a liberal arts degree from New College and a bachelor’s degree in engineering from UF.

O’Shea’s biggest test of leadership came when members of the Legislature last year attempted to merge New College into Florida State University or the University of Florida to cut administration costs and lower tuition. The push failed, but it spooked students and faculty who worry about similar efforts down the road.

O’Shea will be replaced by Patricia Okker, who was dean of the College of Arts and Science at the University of Missouri.

During his more than two decades at the helm of Valencia College, Shugart has transformed the Central Florida institution into one of the biggest and most successful community colleges in the country. Among his top accomplishments was the creation of the DirectConnect to UCF transfer program, which guarantees students who receive their associate’s degrees from Valencia a spot at University of Central Florida. Valencia’s enrollment grew by 33%, and the school nearly doubled the number of associate’s degrees in the five years after the transition program was introduced. More recently, Shugart played a key role in the launch of a new downtown Orlando campus that Valencia shares with UCF. Kathleen Plinske, an executive vice president and provost at Valencia College, will succeed Shugart after he retires this month.