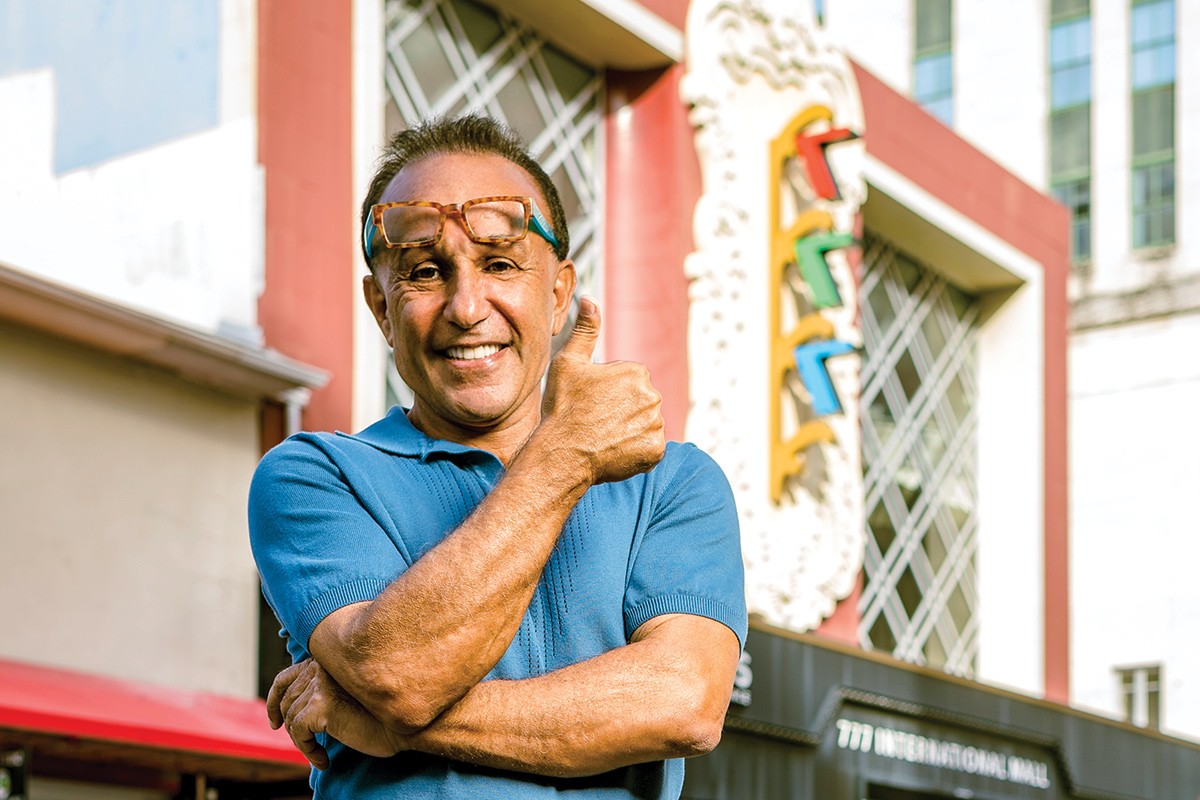 Wynwood sits a bit north of downtown Miami, a 50-block concrete expanse of industrial properties that a half-century ago was a garment district. In the mid-2000s, the late Tony Goldman saw the emerging arts community there, bought property and left an indelible mark, including Wynwood Walls, an outdoor museum of street art that opened in 2009. With its gritty streets and colorful murals, Wynwood became instantly recognizable — Miami’s newest hip area.

Mana then turned to the Flagler district, Miami’s original main street, home to its first hotel — opened by Henry Flagler, no less — and the first Burdines store in 1898. The Flagler district is seedy nowadays — lots of vacant storefronts. At night, except for the homeless, it’s a ghost town. Mana spent $375 million on 60 properties in the district, Real Deal reported, and became the largest property owner there, too.

For a decade now, Miami has been waiting on something to happen. Mana has been on the cusp of building on his vacant lots and renovating his vacant buildings for so long that some impatient observers have tagged him with the nickname Mana-mañana.

Mana, 64, was raised in a poor section of Tel Aviv, the second of five children to Iraqi Jewish parents. He dropped out of law school and emigrated to New York in 1983 with just $800 from his father. He hawked scarves and sneakers on Manhattan streets. In lieu of wages from an Israeli contractor, he used his employer’s van at night to make money as a delivery driver. He loaned the contractor $3,859, got stiffed on repayment and accepted the van as consolation. With it, he founded Moishe’s Moving and Storage, with bright red moving vans and red-clad Israeli-immigrant moving crews. He takes credit for breaking the union hold on the industry. He was profiled in the New York Times’ “About New York” feature when he was just 31.

In 1987, he segued into storage — goods, wine, art and documents, and then to digital document cloud storage under the name GRM. By 2017, GRM had more than 1,000 employees and $100 million in revenue. He says it’s the third-largest digital document storage business in the nation. He started what’s now the MILK Group of fashion, cosmetics and talent agency concerns and put it in one of his properties in Manhattan’s then-rundown Meatpacking District.

“It was both emblematic of and a catalyst for some of the very rapid change you saw happening in the neighborhood,” says Andrew Berman, executive director of the Greenwich Village Society for Historic Preservation.

Mana didn’t slow down. In Jersey City, he launched an artist community he called Mana Contemporary in an old tobacco warehouse, using art as an amenity to boost the value of his surrounding real estate. He made a similar play in Chicago. In Colombia, he acquired an avocado farm. In Panama, he proposed Mana Panama, an “Aerotropolis” logistics hub. He bought South Florida’s McArthur Dairy. He says he’s invested in 72 companies that generate “hundreds of millions” in revenue. In 2016, he appeared in Bloomberg’s Billionaires Index.

Through the years, he visited South Florida, indulging his enjoyment in playing soccer and in horses from a home in Boca Raton. (He also has a home in Miami and a New York apartment.) He says he loves reading philosophy and history and decries as “idiots” people who don’t read and learn history’s lessons. He uses the attention his wealth draws to speak his mind in interviews and social media on everything from the loss of neighborhoods to his fear of a coming food crisis to his opposition to Donald Trump and Israel Prime Minister Benjamin Netanyahu — “the great con man,” he told Israeli media.

In a Zoom interview from his Boca home he detours to his worries over how technology developers view the world and concerns about humanity’s readiness for what they invent. “We’re getting into the shoes of God from the atom and how it’s created and how the world created and created all these — you know, creating suns and creating human engineering. These are the most freaky things.”

Mana detests Trump so much that in 2016 he offered $1 million to Trump’s charity of choice if Trump would release his tax returns. He offered to pay the legal expenses of women who accused Trump of sexual assault and comissioned a statue of a naked Trump for Wynwood.

Meanwhile, his properties sat — and timelines eroded — as he mulled his vision and commissioned designs and plans for his Miami holdings. He dwells on “ecosystem” and curating building “content.”

Now, he says, he’s ready. The short version of his vision: For Flagler, a tech cluster. (He sees Miami as a tech underachiever too dependent on tour ism.) For Wynwood: Entertainment and a trade hub linking Latin America and the Far East.

Some say Miami already plays that role, with its busy international airport, seaport, international banking and the unofficial title for decades as the capital of Latin America.

To the throng at his 2017 birthday party bash in Wynwood — preserved on YouTube — he elaborated. “South America is the future of America, and the future of America is embedded in South America,” he told the crowd. “There is no future for America without South America. We have to work to achieving this goal. Anybody who wants to tell you to beat the world, f—k off! (Cheers.) F—k off! (More cheers.) F—k off! F—k off! ... We have a philosophy. We’re going to connect everybody. ... It’s one ecosystem. Anybody tell you America come first, f--k off!”

Development in Wynwood is largely governed by the Wynwood Business Improvement District, a city-chartered special taxing district created in 2013 and overseen by a board of directors consisting of commercial property and business owners from the 50-city block district. Albert Garcia, who is chairman and co-founder of the district and whose family has had property and business there since the 1960s, says Wynwood’s renaissance as an arts district — “a bright jewel” — brought 5 million visitors in 2019 and 7,500 jobs in the last decade. It has 740,000 square feet of office space and 375,000 square feet of commercial either being developed or completed. It’s added office and commercial space, 735 residential units in the last two years, and developers have 2,000 more in the pipeline.

Mana’s holdings are “one of the few areas that has kind of grown stagnant,” Garcia says. “We’re hoping he’ll soon focus and get those projects out of the ground. Everybody seems to be anticipating the change with much anxiety and with excitement.”

Mana, through long and contentious interactions followed by compromise with the district, has received approval for up to 10 million square feet of commercial and residential development, and a doubling of the maximum allowed height to 24 stories for some of his properties.

The contention intensified a year ago — pre-pandemic — into what Mana called “war” and his “Save Wynwood” campaign. Tenants in new residential buildings and office workers complained of noise from Mana’s Wynwood entertainment center. Meanwhile, retailers objected to unlicensed pop-up businesses and food trucks on his site. There was talk that the upscale clientele drawn to the hip neighborhood had been replaced by rowdy crowds drawn by cheap drinks. Mana said the district was catering to developers and would gut Wynwood as an entertainment center. The district called Mana’s effort a “smear campaign” and held a public meeting titled “Setting the Record Straight on Mana.” Mana held a rival public meeting.

The sides made peace, to a degree. Last year, he broke ground on his first ground-up project in Wynwood, a threestory building that will house the Puerto Rican Chamber of Commerce and some county offices.

On Flagler, meanwhile, Mana says a slew of projects is starting. Renovation work has begun on his Nikola Tesla Innovation Hub, a square building known as 155 for its address. Mana is a “visionary,” says Michelle Abbs, who met him in 2019 while she was director of Babson College’s Miami WIN (Women Innovating Now) Lab accelerator program and now is managing director of Mana Tech. “My first impression is that he’s very intuitive,” she says. She recalls him hosting at a Flagler property the pitch-session finale of the accelerator program. “The energy was real exciting,” she says. Mana told her, “This is what I want to create.”

The 155 building will be gutted and the exterior replaced by year-end.

Mana says he feels the pressure to deliver on his vision and says he prefers things when they’re moving along. “Sometimes I ask myself why I’m doing it. I could have chosen to be a very simple developer. Just build a building, call a broker, get anybody in. And here we go. We can move on and do other stuff,” he says. Instead, he says, he wants to make an impact. “It’s a social impact, not just in terms of Miami, Florida, social impact. A worldwide impact.”