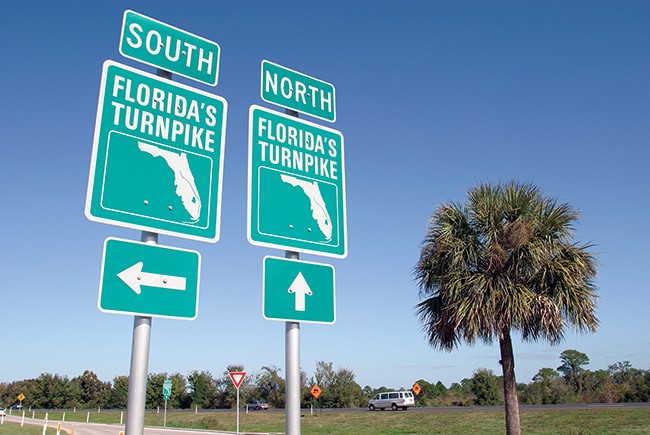 The Legislature identified three corridors for new toll roads, with the exact routes to be determined. The longest would run between Southwest Florida and Central Florida. The shortest would connect Florida’s Turnpike to the Suncoast Parkway. The third road would extend the Suncoast Parkway to I-10 and the Georgia state line.

A year ago, the Florida Legislature conceived a program to create three new toll roads totaling 330 miles across Florida’s hinterlands — the largest toll-road project in the country.

If nothing else, the idea was ambitious. The Legislature specified that the new tollways would be planned, designed and completed in under 10 years — by 2030. It took 11 years from the passage of a 1953 bill creating Florida’s Turnpike to build the 265 miles from Miami to Wildwood, Florida’s Turnpike mainline. The new highways would increase the turnpike system mileage by 68% from its current 498 miles (“Florida’s Turnpike Enterprise,” page 90).

Initial reactions to the plan fell along predictable lines. The Florida Transportation Builders’ Association and the trucking industry welcomed the idea, as did the Florida Chamber of Commerce, which says Florida needs to accommodate a projected 3 million more drivers, 4.5 million more residents and 50 million more annual visitors by 2030. Environmental interests, in contrast, gasped about massive paving coming to rural counties and raised objections ranging from how the new roads would affect the future of the Florida panther to the prospect of Florida’s rural counties clogging with development.

To set the project in motion, the Legislature created three task forces — one for each toll road — that have met over the past year in places that would be affected by the new roads. Comprised of representatives of state departments, local governments and environmental interests, the task forces will report their evaluations of the roads’ impacts to the Legislature in October.

Most of the daylong task force meetings, led by state transportation department officials, produced little clarity — chiefly because they’ve been long on “guiding principles” and short on details. For many months, the state officials couldn’t present the exact routes the toll roads will traverse, nor detailed information on their configuration and cost. Even some supporters grew frustrated over not having specifics to discuss.

Local reaction has hinged on the broad tension between the desire for more economic activity and fears of being overrun. Historically, state highway building in Florida focused on connecting urban areas, but the new projects, the Legislature says, will revitalize rural communities. Many of the 21 counties through which the new roads would pass are among Florida’s least developed, with small populations and low incomes.

“We’re trying to grow our community. We need to grow. Our tax base is very low,” says Ron Handley, chair of the Highland County Board of Commissioners in Central Florida, through which the longest of the new toll roads would pass.

In contrast, in Levy County on the Gulf Coast, through which a new road would run north to Georgia, board of commissioners Chairman Matt Brooks says, “The majority of the people I’ve spoken to, or have sent me e-mails or called me, have said if it comes down to a vote, vote ‘no build.’ We like our rural way of life. We like to see the stars. We like the loudest things to be the frogs in the pond, not the traffic.”

The controlling factor in how the plan proceeds is how to pay for the new roads. Audubon Florida — known for its expertise in birds, the Everglades, coastal conservation and other environmental issues — has been sweating the intricacies of public works bonds in an effort to raise questions about the feasibility of the toll-road plan.

Without a financial analysis from the state, the only way to anticipate costs is to consider existing projects. Using the cost per mile of an extension of the Suncoast Parkway under way in Citrus County, the 330 miles for the new toll roads would come to $6.8 billion, for example. But at the per-mile cost of the Wekiva Parkway project in Central Florida, scheduled for completion in 2022, Florida’s three new roads would cost $23 billion. In dollar terms, the Legislature’s three new toll roads would eclipse major toll road projects completed in recent years in other states and rival the nation’s most expensive road projects.

“I don’t think there’s any way they do 330 miles on the three legs for less than $10 billion,” says Audubon Florida Advocacy Director Charles Lee. He sees $21 billion as a conservative estimate.

There’s more than road-building costs to consider. To build local support and drive that rural revitalization, the Legislature required the new corridors to serve many purposes: They might include water and sewer lines to bring new utilities to rural areas, provide additional hurricane evacuation routes, bring rail, enhance trade and logistics, autonomous and electric vehicle use, bike riding and public transit. They would be constructed with environmental and wildlife protection in mind, lawmakers specified.

The Legislature also said the roads could bring broadband lines to some of the 16 Florida counties underserved by broadband and another 14 counties where 41% to 99% of the population lacks broadband access. The Legislature bundled it all under the unwieldy named Multi-use Corridors of Regional Economic Significance — M-CORES as the project is known.

Further complicating the situation, the Legislature ordered the new Florida toll roads to be part of the turnpike system. Florida’s Turnpike Enterprise can borrow to build, but its borrowing is capped at $10 billion. Turnpike projects also have to meet a statutory test of economic feasibility: Revenue from tolls must cover half the annual debt service on bonds sold to finance the roads by the end of the 12th year of operation. By the 30th year, the tolls have to pay all the debt service.

“If they’re going to toll it, they have to meet that test,” says Lee, a member of two of the three task forces.

The Turnpike Enterprise already is at $2.6 billion of its $10 billion cap, though it’s paying that down, and plans to sell another $2.25 billion through 2024 to fund a $5-billion program to improve the existing system — plans it won’t shelve to accommodate the Legislature’s new roads. Lee says the state can’t pull off the Legislature’s plan without raising taxes or tolls on the existing roads, which presents its own problems. Otherwise, “where does the $10 billion to $20 billion come from?”

Efforts to obtain an interview with Turnpike Enterprise CEO Nicola Liquori or a transportation department representative over a period of weeks weren’t successful.

The state, by scaling back legislative ambitions and by wrangling the finances, could close the gap somewhat.

Florida’s Turnpike Enterprise, an entity that’s part of the state transportation department, has an enviable record for prudence in bond circles. John Medina, lead analyst on the turnpike’s bonds for bond rating agency Moody’s, says the enterprise has a history of effective operation and strong traffic and revenue growth prospects. In 2022 or 2023, the Turnpike Enterprise will pass 1 billion in annual toll transactions for the first time.

Medina says the state “really has a lot of options” for financing the roads. The Legislature mandated the new highways be toll roads but it also authorized ways to cobble together money from additional sources. The state can sell other types of bonds to raise money — bridge construction stand-alone bonds, for one — and can sell bonds through a state entity, the FDOT Financing Corp. The Legislature also funneled more money into state programs, such as one for small county road building, that it can tap. It moved money from state motor vehicle fees that formerly went to general revenue into a toll-road kitty that in a couple years will make $106 million a year — a billion dollars a decade — available.

A federal coronavirus-related stimulus spend on infrastructure could provide some funding.

The Legislature also opened the door for public-private partnerships — socalled P3s, a strategy in which Florida is a national leader. Such a partnership enabled the fast construction of the $1.8-billion I-595 cross-Broward project — the largest P3 in the nation — and the $669-million Miami port tunnel. From such projects, Florida established a good reputation internationally as a business partner in P3s, says Jerry Brodsky, a Miami senior partner with construction law firm Peckar & Abramson.

For a traditional road project, a government takes bids from firms for individual portions of a project — the design or construction of particular pieces — and pays as it goes. In a P3, however, the government partners with a private firm that risks its own capital to design, develop and build and perhaps operate a project. The private-sector partner gets paid back from either the revenue for tolls or over time by the government.

A partnership allows a project to move forward faster than by using piecemeal funding, says Mitch Bierman, a transportation attorney with Weiss Serota in Miami. “There are a lot of situations where the private sector can do it for less,” Bierman says, and, “government, for want of a better word, has a throat to choke if things aren’t going right.”

Florida public-private partnerships to date have attracted consortiums of major international firms. Spain-based giant ACS’ Dragados unit was a key player in the I-595 project. Major firms might find the state’s proposed new toll roads attractive and offer the state — through the bundling of different capabilities in road building, broadband laying and the other aspirations in the state’s multi-use list — economies in cost.

Costs can be mitigated in other ways. Some sections of roads could be built over existing road corridors, lowering land acquisition costs. It’s not a given that all 330 miles will be four-lane, turnpike- like highways. The routes could be built as a mixed corridor of toll roads and non-toll roads, says Ananth Prasad, a former state transportation department secretary who’s now president of the Florida Transportation Builders’ Association. He notes that the speed limit on U.S. 19 north of the Suncoast Parkway today already is 65 mph.

For now, his industry members are “watching and trying to prepare for it,” he says. As for completing it by 2030, “it can be done,” he says.

Audubon’s Lee, meanwhile, maintains his doubts on the proposed roads’ merits and feasibility, more so after the coronavirus hit the state’s economy. Turnpike daily traffic volume dropped by 51% in the last week in March, which means lost revenue, which in turn impacts debt service coverage. S&P Global Ratings changed its outlook on nearly all U.S. transportation infrastructure bonds to “negative” from “stable” because of COVID- 19. Says Lee, “If it was skating on thin ice before, what about now?”

Calculating the Cost: The Comps

State officials have been slow to provide estimates for the cost of building 330 miles of new toll roads through rural Florida. Following are some per-mile costs for other major road projects.

An extension carrying the parkway north 13 miles to SR 44 in Lecanto cost $20.7 million per mile. At that rate, the 330 miles of toll roads would cost $6.8 billion.

Connecting SR 417 and I-4, the last link in the Central Florida Beltway, Wekiva Parkway costs $69.6 million per mile. At that rate, the toll roads would cost $23 billion.

Improving the 21-mile run of I-4 from Kirkman Road near Disney north to Seminole County is projected to cost $109.5 million per mile. At that rate, the toll roads would cost $36 billion.

• The turnpike system serves 67% of the state’s population and 19 of its most populous counties.