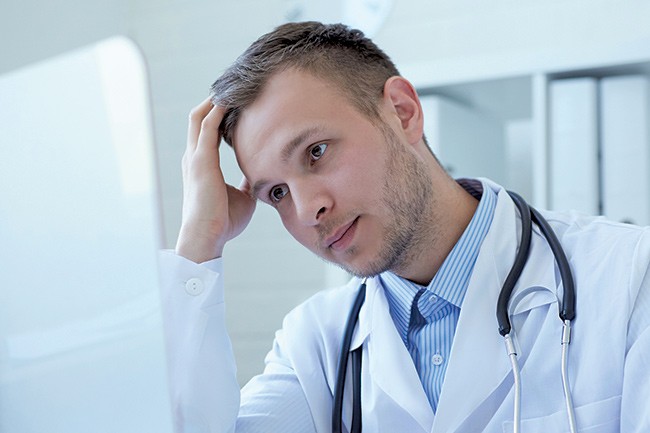 In 2018, Florida’s Agency for Health Care Administration (AHCA) hired a Tallahassee consulting firm to assess the state’s “health information exchange” (HIE) landscape. It found that despite widespread adoption of electronic medical records, the ability of providers to share information with others outside their own practices is “not widespread.” The study also concluded that paper-based methods such as faxing are still the main way that health care providers and facilities share information — “even among HIE adopters.”

Federal data show the situation is worse among physician practices than among hospitals: Fewer than a third of Florida physicians can send or receive electronic health data, and fewer than a quarter can integrate their systems with others.

Sometimes even doctors within the same health care system can’t share data electronically: When an Orlando woman visited her internist to follow up on bloodwork ordered by a specialist who works for the same Orlando health system, the internist couldn’t see the results of the tests the other doctor had ordered. The woman had to use her phone to take a screenshot of the test results from LabCorp and then e-mail them to the doctor’s staff to print out.

Why can’t systems talk to each other? Respondents in AHCA’s 2018 survey cited everything from cost to concerns about privacy and “fears of litigation” as barriers to data-sharing. Competition also is a factor in keeping data siloed. Some software providers view the mechanics of their own programs as proprietary — a competitive advantage — and don’t want to share out of fear they’ll fall victim to “patient poaching” and lose money, the study noted.

EHR vendors have thrown other kinks into the process. In the rush to get products to the marketplace and take advantage of the funding provided to doctors by the HITECH law, vendors weren’t focused (or interested) in making their products talk with those from competitors, so most didn’t — and many still don’t.

Some charge large fees to build interfaces to integrate data with other systems — an impediment that government has labeled as “information blocking.” And it’s not unusual for vendors to hold patient information hostage if a physician decides to switch EHR software, charging them fees to access their data.

In some cases, it’s even written into the contracts the EHR companies ask doctors to sign. A Nextech contract obtained through court records states customers will have to “extract data on their own” if they switch vendors and that Nextech will provide a backup copy of patient demographics and charts to former clients for a “reasonable and customary fee” if it’s “commercially reasonable” to do so.

“Poor patient matching” is another challenge to record-sharing, says Ben Moscovitch, project director for health information technology at the Pew Charitable Trusts. Accurately matching patient health records at different facilities (or within the same facility) depends on identifying common data. But a name change (when someone gets married or divorced), an address change or even having a common name can make that difficult. He says patient matching fails up to 50% of the time.

Today, there are two national sharing networks, the CommonWell Health Alliance and Carequality framework, that facilitate data sharing among vendors and health care providers, but participation in the groups is voluntary.

The federal Office of the National Coordinator for Health Information Technology (ONC) has proposed a rule requiring EHR vendors to use standardized application programming interfaces (APIs) — software tools that allow different technologies to communicate. The rule, now under review of the Office of Management and Budget, will make it easier for patients to access and download their own records via third-party apps.

But not all EHR software firms back the proposal. Epic, a Wisconsin-based vendor that controls more than 25% of the hospital EHR market, cites privacy risks for patients and potentially higher health care costs. Cerner, Epic’s chief competitor, favors the rule, as do Apple and Microsoft.

Another proposed rule from the Centers of Medicare & Medicaid Services would require participating hospitals to send “patient event notifications” to patients’ providers when they’re admitted, discharged or transferred.

Florida is already a step ahead of the federal government. Last year, a state law took effect requiring hospitals to notify patients’ primary care doctors within 24 hours after a patient has been admitted to or discharged from the hospital. The law also requires the hospital to provide a discharge summary to the patient’s physician within 14 days. The law does not specify, however, whether the information is to be sent electronically or by some other means.

But more than 200 Florida hospitals already transmit such notices to doctors and payers (such as Medicare and Medicaid) in near real-time through the state’s electronic Encounter Notification Service. Health IT experts say this sort of data sharing will be important as government and private payers transition from fee-for-service to value-based reimbursement, which will require different providers to share in savings and losses related to a patient’s care.