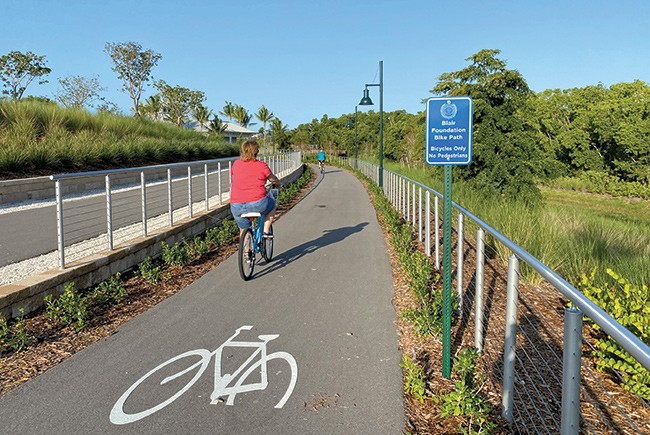 Since 2015, the rate of death from heart disease in Collier County — which includes Naples, Immokalee and Marco Island — has declined 8.1%. It’s far and away the lowest of any county in the state, at 89.3 deaths per 100,000 people. Risk factors associated with heart disease are lower in the county compared to the state average.

Coincidentally or not, 2015 was also the year that local health leaders embarked on a community- wide health improvement initiative known as the Blue Zone Project.

Spearheaded by Alan Weiss, then-president and CEO of NCH Healthcare System in Naples, the initiative is based on the research of Dan Buettner, a National Geographic fellow and award-winning journalist who traveled the world looking for the health secrets of the longest-living people. Buettner distilled his findings into nine evidence-based diet and lifestyle habits he calls the Power 9. They include everything from eating less overall to eating more plant-based foods to moving more. Buettner encourages cities to promote those nine pillars in order to help their residents live longer and healthier lives.

More than 700 organizations are involved in the Blue Zones Project- Southwest Florida, and Executive Director Deb Logan says the effort has reached an estimated 225,000 people to date.

Logan says the group spreads its message via coordinated efforts through numerous outlets, including workplaces, schools, homeowner associations, faith-based organizations, restaurants and grocery stores. An HOA, for instance, might urge a local restaurant to offer plant-based dishes or encourage community residents to form small social support networks, known as “moais,” who meet up regularly to take walks or dine at a Blue Zone restaurant. The purpose is two-fold: The moai promotes healthy habits while also building connections that decrease loneliness and isolation.

“Our goal is to build infrastructure within the community … working with HOAs or worksites or schools and helping them adopt best practices that really nudge well-being, nudge those choices that people can make,” Logan explains.

On the policy side, the project brings in national experts to talk about how walkability and bikeability can improve a community’s overall well-being. Other focus areas include expanding access to fresh fruits and vegetables, such as through farmers markets, and implementing smoke-free zones near playgrounds and on beaches.

Other Florida communities are beginning to look at how Blue Zones initiatives might help them. Last year, the Orlando Economic Partnership’s Foundation for Orlando’s Future tapped Buettner’s Minnesota-based Blue Zones group to do an assessment of Orange County and come up with a plan to tackle problems such as obesity and smoking and improve residents’ overall well-being.

In Collier, Logan sees signs that the Blue Zones project is working. Eight years ago, she says, Collier County ranked 73rd in the nation in the Gallup-Sharecare Well-Being Index, which measures people’s perception of their lives as it relates to five factors: Their sense of purpose, social relationships, financial security, relationship to community and physical health. For the past four years, the county has ranked first.

Logan acknowledges that the region has certain advantages, including higher rates of wealth and education — but she believes the Blue Zones project is also making a difference. “When you see the community go from No. 73 to No. 1 for four consecutive years, you know that something is going on.”

Through his travels and research, Dan Buettner found that individuals who live to be 100 tend to have nine things in common. He urges others to follow these Power 9 rules:

The heart disease death rate for adults aged 45 to 64 in Florida declined 26% between 1999 and 2010 but increased 7.5% between 2011 and 2018. Doctors attribute the spike to rising rates of obesity, diabetes, inactivity and other risk factors.