The software success of Modernizing Medicine 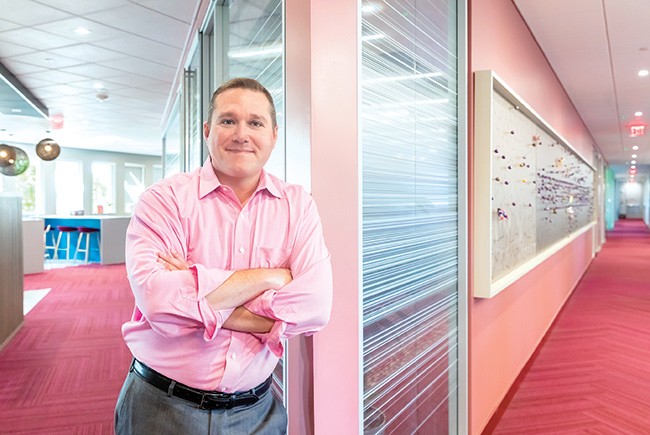 In 2009, Dan Cane went in for a routine physical with an internist in Lake Worth. He got a clean bill of health, but the internist noted his tanned skin and referred him to a dermatologist, Dr. Michael Sherling, for a checkup. Several days later, Cane was sitting on an exam table in front of Sherling, grousing about all the paperwork he had filled out between the two appointments.

“The entire experience from the doctor to the medical assistant to the front desk was analog. It was paper, more paper, more paper,” Cane recalled last year on a podcast with Alejandro Cremades, an entrepreneur consultant in New York. “So here I am in a paper gown talking to a doctor about why he isn’t using technology and is there an opportunity. He starts flipping back in my charts like, ‘Who is this kid?’ ”

Sherling, a Harvard- and Yale-educated doctor, would soon learn that Cane had built a billion-dollar education software company and was looking for a new challenge. “We hit it off, and he became my co-founder” in Modernizing Medicine, Cane says.

Cane, 43, grew up in Lake Worth. His father, Edward, was a local internist, and his mom, Marilyn, was a law professor at Nova Southeastern University. He graduated from Lake Worth High School and went to Cornell University, his parents’ alma mater.

In a statistics class his sophomore year, Cane noticed he couldn’t follow the professor and take notes at the same time. With the professor’s help, he created a course website where students could find lecture material, readings, notes and grades online. Before long, other professors at Cornell were asking him to create similar websites for their classes. He charged a small fee and persuaded his housemates to help scan and post course information online.

“We measured success based on the type of keg we would be able to have. We went from Beast to Rolling Rock and then to Sam Adams, and that’s when we started to really get excited,” he said last November in a presentation to business students at Cornell. “Pretty soon, the tools got good enough that we turned them over to the professors and TAs to use.” One semester later, other universities began licensing their technology.

In 1997, their company, then called CourseInfo, merged with a KPMG spinoff also focused on education technology to form Washington, D.C.-based Blackboard. In 2004, Blackboard went public. And in 2011, it was sold to a private equity firm in Providence, R.I., for $1.6 billion. “It was a good financial exit for me, my original investors and friends,” says Cane, who wouldn’t divulge his personal take. By the time

Cane met Sherling, he had left Blackboard and moved to South Florida. (Meanwhile, he also had launched a social-networking site called Kadoo that failed.) When Cane asked Sherling why he was still writing notes in paper charts, Sherling explained that the software then available didn’t work well and slowed him down.

“He was seeing 40, 50, 60 patients a day, and technology that slowed him down wasn’t welcome,” Cane says. “I thought I would help him find the right technology.”

In the process, Cane realized Sherling was “absolutely right” — even the best medical records software was inadequate. “Companies that were doing it didn’t fully understand the needs and complexities of specialty markets. They had built themselves as one-sizefits- everyone, which means they didn’t fit anyone particularly well, especially specialists.”

In 2010, Cane and Sherling founded Modernizing Medicine, a software company that develops electronic medical records systems for dermatologists and other specialists across the U.S.

Despite Cane’s success with Blackboard, he struggled to raise venture capital for the new startup. Investors were concerned both by the Great Recession and also the challenge posed by taking on medical records.

“It was a super highly regulated industry in an incredibly crowded space. We were going to need to raise millions and millions of dollars to build our first unit and get it certified, and even then we were going to be displacing big incumbent systems,” Cane told his Cornell audience. “They weren’t wrong about any of that.”

He and Sherling asked their “beta” customers — dermatologists who had agreed to test their software before its release — to vouch for them to potential investors. Instead, the dermatologists asked if they could invest in the company themselves. “We accidentally raised over $3 million from our customers before our first dollar of revenue,” Cane says.

Over time, he and Sherling took advantage of the newly launched Apple iPad and Amazon Web Services to create touch-screen, cloud-based technology that could understand its users’ specialties, remember their preferences, suggest treatment plans and call up billing codes. To help develop the software, they hired other doctors and taught them to write computer code.

Amr Kronfol, managing director at Warburg Pincus, says the firm was impressed with both Cane and Sherling and their focus on helping doctors use technology to improve care rather than merely meet the standards required by the federal government to get incentive money for going digital.

Kronfol, a board member at Modernizing Medicine, says many legacy electronic medical record (EMR) systems were clunky and primarily designed to “check a box” so that doctors could qualify for Medicare incentive payments. Under the federal Health Information Technology for Economics and Clinical Health (HITECH) Act signed into law in 2009, doctors who fully implemented EMRs by 2016 would get $44,000 from Medicare and $64,000 from Medicaid; those who didn’t adopt the technology faced penalties.

“Our view is that if you build good next-generation software for electronic medical records and practice management, you can really help doctors, patients and insurance companies,” Kronfol says. “That’s what Dan and Michael set out to do. They were not legacy players that were part of the problem. They were trying to create something that would be part of the solution.”

While Florida has a history of seeing successful startups move to California or New York to be near larger pools of capital and talent, Modernizing Medicine is here to stay, Cane says. Local universities are producing the “talent we need to grow,” he says, and South Florida has a vibrant ecosystem of technology companies and professionals. “We’re able to attract employees from some of them, and sometimes we lose employees to local tech companies,” says Cane, a former member and vice chair of Florida Atlantic University’s board of trustees.

In 2018, he and his wife, Debra, gave $1 million to support science, technology, engineering and math (STEM) initiatives at two local public schools associated with Florida Atlantic University, A.D. Henderson University School for K-8 students and FAU High School. All three of their children attend one of the two schools.

About 15 months ago, Modernizing Medicine moved its headquarters from FAU’s Research Park to the Boca Raton Innovation Campus, a 125-acre office park where IBM once had a large presence. Cane says he chose the location because of its symbolism as the birthplace of the IBM personal computer and because there’s ample room to grow. When renovations are completed later this year, Modernizing Medicine will occupy about 150,000 square feet, increasing its space by 80%. It also has offices in Roseville, Calif., and Santiago, Chile — the result of two acquisitions.

More than 16,000 physicians across the U.S. use its EMR systems, and the company continues to add specialty areas and products. Along with dermatologists, it makes software for gastroenterologists, ophthalmologists, orthopedic doctors, plastic surgeons and otolaryngologists. It also has specialty-specific software to help with billing, accounting and customer service, including apps that enable patients to see their lab results, schedule appointments and give feedback.

The company charges a one-time cost for its software, startup and training fees and a monthly subscription fee. It does not publicly disclose prices, saying they’re negotiable and varied based on the number of users in each practice. Over the past five years, its sales have increased 461% from $30.5 million in 2014 to $171 million in 2019. If trends continue, its sales will surpass $200 million this year.

Today, nine in 10 U.S. health care providers use EMRs, up from about one in 10 a decade ago. The industry is now entering a period of consolidation, Cane says. “We’re seeing a handful of companies emerge as leaders, Modernizing Medicine being one of them.”

“Warburg is a fantastic partner,” Cane says. “They want growth, which is what I want. Today, we have close to 800 employees, and that number will grow to over 1,000 in the next 18 months.”

Background: As a college student, Cane and a few Cornell classmates founded an education software company that later became Blackboard, an e-learning tool used by many universities.