Florida millennials are moving back to the burbs 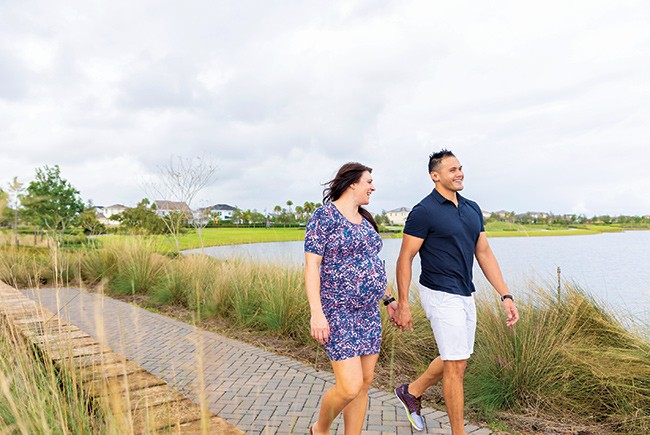 Southern Boulevard runs from Mar-a-Lago on the ocean westward through West Palm Beach and past the Royal Palm Beach and Wellington suburbs before giving way to flat rural land as far as the eye can see. Just shy of a turn known as Twenty-Mile Bend, the roadside vista abruptly switches back to suburban landscaping and the entryway and gatehouse for Arden, a 2,000-home master planned community.

There, in August, husband and wife Charles Santos and Elyce Arcieri, expecting their first child, closed on a three-bedroom Florida Craftsman-style home on Wandering Willow Way, one more Millennial-generation couple putting down stakes in the suburbs.

Early in the 2010s, America saw a “back to the city” trend, in part driven by the 75 million-plus Millennial generation — defined by some as those born from 1981 to 2000. Millennials were said to favor walkability, the corner coffee shop and urban life. Awash in debt, they also were delaying marriage and home buying.

Now, mirroring a national shift to the suburbs, growth in most of Florida’s largest cities and urban counties has slowed. For the subset of buyers in Florida who are Millennials, the Census evidence of a similar shift is inconclusive, but builders have sensed opportunity in a massive generation forming households and having children. Harvard University’s Joint Center for Housing Studies says Millennials will form 2 million households per year for the next decade. Millennials are the “No. 1 new-home purchaser” in Jacksonville, Orlando and Tampa, says David Cobb, regional director for the Metrostudy real estate consulting firm.

Millennials appear as willing as their predecessors to trade a commute for a single-family detached home, good schools, a yard, safety and value per square foot. They’re hitting on price points ranging from starter homes in Central Florida to Sonoma Isles in Jupiter in suburban Palm Beach County, where the average PulteGroup DiVosta home sells for $950,000 to $970,000. “We did not expect to see a Millennial buyer buying a $1-million home,” says David Achee, vice president of sales for Southeast Florida for PulteGroup, the builder. “We’re seeing Millennials starting to excel in their careers.”

Millennials have made their presence felt at Lakewood Ranch, the 14,731-home multi-generational development in Manatee and Sarasota counties south of Tampa Bay. According to MetroStudy, it was the top-selling master planned community in the nation last year.

Though Boomers and Gen X buyers account for greater shares of LakewoodRanch sales, Millennial buyers increased to 19% of new-home purchasers at Lakewood Ranch in 2018, up from 16% in 2016, and 27% of resale buyers in 2018, says Lakewood Ranch Senior Vice President Laura Cole. Millennials are the leading demographic on the development’s list of prospects.

“They are at that next stage,” says Monaca Onstad, Lakewood Ranch’s community relations director. “They’re married. Maybe they’re ready to start having kids. They’re ready to get out of the city and into the suburbs.”

When they can get it, some Millennials prefers suburbs with an urban twist.

Similarly, Lake Nona, 20 miles from downtown Orlando, has a mix of homes and a town center with large employers, dining and food truck Fridays. Millennial residency increased to 33% in 2018 from 27% in 2017, says Karlee Kunkle, communications manager for Tavistock Development, the developer of Lake Nona.

Generalities only go so far in a generation as large as the Millennial one. While affluent, older Millennials — the oldest turn 39 this year — are said to want urban-style suburbia, younger ones with less money just want a house they can afford. A few miles from Lakewood Ranch and its craft breweries, Millennial buyers are scooping up homes in a development without a whiff of urban life. Neal Communities’ Canoe Creek in Manatee County near Lakewood Ranch is “sort of a suburb of a suburb” with lower price points, says Neal’s Jason Frost, vice president for land acquisition.

Neal developed Canoe Creek and nearby Silverleaf with an eye toward empty nesters and retirees. Some 44% of buyers have been Millennials. In a recent period at Canoe Creek, six buyers were under 24. “That’s a lot for that age group,” Frost says.

Arden runs the opposite from the urban-amenity theme. Developed by Freehold Communities, it sells itself as an “agrihood” with a working barn and a five-acre community farm. A third of buyers are Millennials. Arcieri and Santos — she’s a project manager for Cisco, and he’s a firefighter — moved to Florida from Raleigh, N.C. Santos is a Hialeah native. They landed first in suburb Wellington and rented. Arcieri was raised in the country and had to adjust to Southeast Florida; she and Santos agreed to “get away from the congestion of Miami- Dade and Broward,” Santos says.

A real estate friend of theirs posted a photo on Instagram of a Craftsmanstyle house at Arden unlike the stucco- Mediterraneans that are all but ubiquitous elsewhere in Southeast Florida. Arcieri says she immediately asked where that was. They purchased a 2,700-sq.-ft. Lennar home for $497,000. They say Arden’s zone schools are good, and it has land on site reserved for a future school. Every four weeks in harvest season, homeowners get a share of the community farm’s produce — chard, herbs, cucumbers and okra in a recent box. The suburban development also has resort-style split-level pool and a clubhouse, where 50 friends gathered for their baby shower.

For a share of Millennials, homeownership remains distant. A recent study from Apartment List reported that 10% of Millennial renters in Florida plan to “always rent,” with a majority of that group saying it’s all they can afford. Rob Warnock, Apartment List’s researcher, says Millennial homeownership is on the rise, though lagging previous generations, but the Millennial renters left behind are becoming less optimistic about their chances of owning a home.

Those in the market, however, have turned places such as Horizon West in west Orange County into hot spots for young families. Buyers of raw land are busy reloading to meet demand around Florida. Noah Breakstone, CEO of Fort Lauderdale-based developer BTI Partners, says his firm paid $40 million for 1,400 acres in Osceola County now approved for 5,000 homes and 2 million square feet of commercial space. He expects builders there to target Millennials and active adults.

For home buyers to get what they want, “they have to go farther out” than cities, says Matthew True, a Pulte North Florida division general sales manager. “Everybody’s looking for the best deal, and so are we when we’re looking for land,” True says.

“I wanted to be farther out,” says Arcieri, back in Arden. In November, the couple were decorating for Christmas and finishing a nursery for the baby that was due at the end of January. “We knew we wanted a house,” Arcieri says.

With a few exceptions, Florida’s suburbs have been growing faster than its primary cities.

These 10 Florida communities, which include so-called “Census-designated places” that are part of larger metro areas, had the largest increase in the number of Millennials since 2010.

Slower Gains at Some of Florida’s Largest Metros

While Florida continues to add residents, some of the state’s largest metros have seen growth slow over the past three years.

In retrospect, reports University of Michigan demographer William Frey, the back-to-the-city phenomenon was an aberration stemming from the Great Recession and a Millennial generation temporarily “stuck in place.”

The back-to-the-city trend also was oversold. Miami’s total downtown population, Florida’s largest, numbers 92,235. Though it’s grown faster since 2010 than the overall metro — 38% vs. 8% — its growth numbers remain a rounding error in a region with 6.1 million people. The same holds true of downtowns in other major Florida cities.

The Millennial surge has led builders to adjust designs to cater to Millennial interests. Millennials are said to focus on fitness — though spiking hypertension, unhealthy body weight and other maladies are hallmarks of the generation, too — so builders put in fitness centers, which are cheaper than clubhouses, and walking and cycling trails. Charles Santos, a fit firefighter, and Elyce Arcieri, a triathlete, fit the health-conscious Millennial trait. They met at a gym in North Carolina. Arden, the community where they live, advertises 20 miles of trails.

Additionally, like older buyers, research shows the overwhelming majority of Millennials are willing to pay for an environmentally friendly home only if extra costs are recouped by lower bills.

Builders report that the subset of Millennials they see has little problem qualifying for a mortgage, though some have student debt and perhaps get down payment help from family. Santos and Arcieri got over the down payment hump by living for a time with his family in suburban Broward to save money.