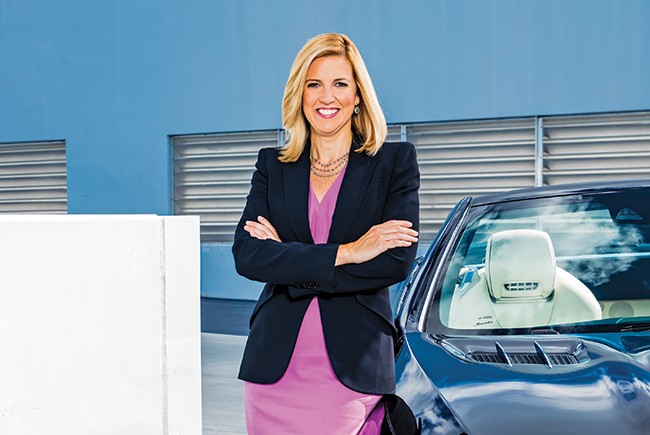 As COO, Cheryl Miller helped guide AutoNation through the recession. She’s now CEO of the company, the fifth-biggest firm in Florida and the largest firm in the state to be headed by a woman.

In September 2018, Mike Jackson announced that he planned to step down as CEO of AutoNation after nearly 20 years at the helm of the Fort Lauderdale-based company.

After a national search for a replacement, AutoNation in February chose Carl Liebert, then COO of financial services company USAA. Just five months later, however, AutoNation and Liebert parted ways, the company saying it had not been a good fit. AutoNation then promoted Cheryl Miller, its CFO for five years, to CEO.

Miller’s promotion to CEO made her the first woman to lead a publicly-traded company based in South Florida — and one of only 10 women among the 125 largest public companies statewide (See list, page 52). AutoNation — with 26,000 employees and more than $20 billion in annual revenue — is the largest Florida company, public or private, to have a woman CEO.

“She’s one of the most outstanding executives I’ve ever worked with,” says Jackson, now executive chairman.

Miller, 47, was born in Puerto Rico and grew up in Baltimore. Her father worked for the U.S. Postal Service, and her mother, a native of Puerto Rico, was a homemaker and eventually a government worker.

Miller says her parents encouraged her and her older brother, Mike Scully, who now runs a credit union services company in Maryland, to be ambitious.

“We certainly didn’t sit around when we were 7 and 9 and talk about ‘let’s go be CEOs,’ ” she says. “But I grew up in a family that believed in people and believed that anything was possible, that if you worked hard and focused and you also helped other people, you’d open yourself to a lot of possibilities in life.”

Miller studied finance and business at James Madison University in Harrisonburg, Va., and began her career at Richmond-based CarMax, then a division of Circuit City. She showed leadership potential and entered Circuit City’s financial management-training program.

In 1998, Miller came to South Florida to work for Wayne Huizenga’s Republic Industries. A year later, Republic changed its name to AutoNation and spun off its car-rental unit, ANC Rental, into a separate company. After working for the spinoff, Miller joined Paxson Communications, now ION Media Networks, and then JM Family Enterprises, a large private Toyota distributor based in Deerfield Beach.

In 2009, as auto giants General Motors and Chrysler prepared to file for bankruptcy, Miller returned to AutoNation as treasurer and vice president of investor relations.

“It was a very challenging period for everyone in America, and we needed a top performer,” Jackson says. “She was calm, knew her numbers at all times and really helped us through the storm.”

Miller says she was eager to help AutoNation recover from the financial crisis. “I knew that we were at or close to the bottom in the industry,” she says. “I saw it as a great opportunity for a multiyear climb.”

Miller became CFO in 2014 and in 2017 secured AutoNation’s deal with self-driving technology company Waymo to maintain and repair its autonomous test fleet. Last year, she oversaw about $50 million in cost cuts, including a consolidation of AutoNation’s operational structure from three regions to two.

When Jackson announced his planned departure as CEO, Miller didn’t have to ask to be considered for the job, he says. “I’d already been talking to her about it for a year or so. That was a running discussion.”

He says it was a close call between Liebert and Miller, but Liebert won out because of his “unique” skill set. In addition to having overseen USAA’s digital platforms, Liebert brought key experience in supply chain management from a prior stint at Home Depot. “We felt that we had found the ideal person,” Jackson says. “It didn’t work out at all.”

Jackson, who’s under contract to remain executive chairman through 2021, says Miller “intellectually understood” why Liebert had been chosen and supported the decision. “She showed a lot of class and loyalty to the company,” he says.

So far, Miller’s appointment has been well received on Wall Street. In the first month after her July 22 appointment, AutoNation’s stock rose 13% to $47.54 vs. a 2% decline for the S&P 500 index.

“Her biggest challenge is convincing investors that auto retail, in and of itself, is a big play and worthy of investment,” says auto industry analyst Cliff Banks.

To diversify its sales and prepare for a possible recession, AutoNation has been beefing up its parts and service-related product lines, he says, selling AutoNation-branded parts and opening used-car supercenters. “They’re moving in the right direction.”

While Miller’s appointment was a milestone for female executives, it also raised a question: Why are so few women in charge at the largest companies?

The answer has to do with who’s in the CEO pipeline, experts say. Women make up 45% of employees at companies in the S&P 500 index but only 37% of mid-managers, 27% of senior managers and 11% of top earners, according to Catalyst, a New York non-profit research and consulting group. Among C-level executives, the percentage of women drops to single digits.

Underlying the dearth of women in the pipeline is a host of factors — male favoritism, family obligations, unconscious bias or stereotyping and differences in socialization, says Florida State University business professor Michael Holmes, who has studied the effects of gender on CEOs’ careers (“Gender Bias,” page 54).

“If you ask somebody what the attributes of a good leader are, they mention things like aggressiveness, toughness, emotional detachment and rational decision making. Generally, those attributes overlap stereotypical male attributes,” Holmes says. “Males just acting naturally or according to male stereotypes display the characteristics that people ascribe to effective leaders.

“Females displaying those same characteristics may be perceived as unfeminine or out of touch,” he adds. “For women to overcome gender stereotypes, they’ve really got to be elite superstars.”

Miller says she has never felt pressure to change who she is because, as she puts it, “that’s unsustainable.” She says she’s benefited from having mentors, both male and female, and counts among her accomplishments at AutoNation the creation of an in-house training and mentorship program for controllers.

She says she has found camaraderie and inspiration among other female executives in South Florida, including University of Miami COO Jacqueline Travisano, an AutoNation board member. She also points to General Motors CEO Mary Barra and Lincoln Motor President Joy Falotico as signs of progress in the industry.

Companies “are looking to more closely resemble the communities and customers they represent,” she says. “I think you’ll see women CEOs get into the double digits. You might say that’s a low bar, but I think the momentum is there,” she says. “Providing role models and making sure people believe that could be them is a great start.”

In announcing her promotion, AutoNation noted that Miller had become the first female CEO of a public auto retailer. Holmes says he’ll know real progress has been made when a female CEO’s gender no longer is newsworthy.

“It should not be as big of a deal as it is. I hope we get to the point one day where we can just say, ‘AutoNation hired a CEO,’ and be done with it,” he says. “We’re still at a stage where we’re counting and marking these things as milestones.”

In 2018, FSU business professor Michael Holmes and several colleagues published a report that looked at the effects of gender on CEOs’ careers, analyzing dozens of studies from the past 25 years. They identified at least four reasons why more women aren’t CEOs.

Gender stereotypes: Words generally used to describe a good leader — assertive, decisive and aggressive — are stereotypically associated with men. When women display these traits, they tend to be criticized as not nice or mean, Holmes says.

Family obligations: Still regarded as society’s caregivers, women are more likely to be pulled between family and work. Those who take leave to care for a newborn or sick relative might struggle to get back on the promotion track.

Different socialization processes: Boys are encouraged from a young age to “lead, take risks and accomplish common goals in a way” that girls typically are not, Holmes says. The consequences can play out later in life, such as when a boss tends to choose a man vs. a woman for risky or challenging job assignments.

“Maybe it’s out of some kind of paternalism or concern for the female’s safety. Maybe the boss is thinking the female has family demands and doesn’t want to take her away from her home,” Holmes says. “Whatever the reason, the male tends to get that responsibility, and so he gets more opportunity to develop and learn.”