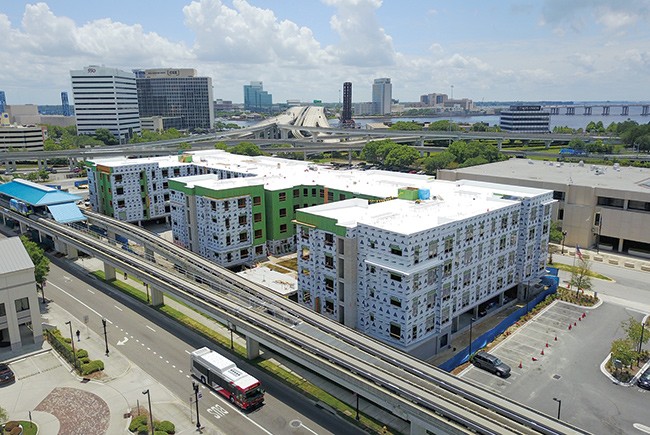 Over the past decade, federal housing officials have shifted resources away from homeless shelters and other temporary housing programs in favor of building more low-income, long-term housing.

Jacksonville-based Vestcor plans to develop a 140-unit apartment complex called the Lofts at Cathedral by renovating the vacant, three-story brick building and incorporating it into new construction on adjacent property. Vestcor Chairman John Rood says rents likely will be affordable for people earning between 140% and 60% of median income.

Vestcor also will soon begin building a 133-unit apartment complex for low- and middle-income residents in downtown’s Brooklyn neighborhood. The project, called the Lofts at Brooklyn, received $17.9 million in tax credits allocated by the Florida Housing Finance Corp. in March. Vestcor says 80 units will be for people who make up to 60% of median income ($30,900 for an individual), and 53 units will be for people at 140% of the median ($72,100).

In June, Gov. Ron DeSantis vetoed an appropriation of $8 million for workforce housing in downtown Jacksonville from the state budget. Rood says he had hoped to apply for the appropriated money to help finance the Lofts at Cathedral. Nevertheless, he says, he’s moving ahead with the project and will continue to look for both public and private funding.

“We’re providing housing primarily for the entry-level worker, people who are getting out of school and starting their first job in a variety of different industries,” he says. “They just need a place they can afford.”

In May, the Duval County School Board approved Vestcor Chairman John Rood’s plan to build a K-12 charter school near downtown. The school will be affiliated with Michigan’s Hillsdale College, which has helped open 25 academies across the U.S., including six in Florida. Rood describes the approach as traditional rather than technology-oriented. “It’s a very teacher-focused learning environment,” he says.

The school, called Jacksonville Classical Academy, is to open in August 2020 and eventually will have 1,100 students, he says.