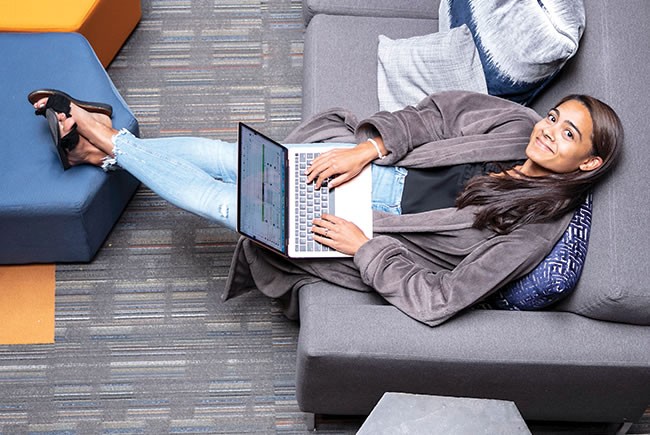 “They don’t hire on resumes, but more on people” and how they fit into the team and culture, says George. The company’s owners took her out to lunch before they hired her two years ago. “They were more intrigued about me — how I grew up in New York City and my family,” she says, with credentials, such as her MBA, secondary to her background as a whole.

The company celebrates employee birthdays or a co-worker’s upcoming marriage, with cake and champagne. It hosts Movie Fridays in the office, with lunch provided. There is plenty of time for fun, she says.

Then there are the cozy robes. Each worker is presented with an embossed robe with a sleep-inspired nickname when they join the team (hers is AleSiesta George). When the office gets chilly “everyone walks around in their robes. It’s to just have a comfy environment,” she says, where everyone feels like family.

It’s a two-for-one when your boss also happens to be your mentor, as is the case with Dayami Emory. “I get inspired by her work ethic, and it resonates,” Emory says of Melissa Pineda. A five-year employee who previously worked at an IT company, Emory says her Apollo co-workers are inspiring. “From the leadership on down, they’re all one of a kind,” she says.

The focus and audience of its annual wellness fair are broad. Not only does the fair cover topics of physical health — including fitness, nutrition and areas like dermatology — but it features information on financial wellness, as well. And it isn’t just an employee event. Emory says it’s specifically planned on weekends so employees’ families can attend, too.

“We’re always trying to expand it and have different speakers that we didn’t have in the past,” she says, ensuring relevancy and value.

“We reference it as Team Cone. When I say, ‘Team Cone,’ everybody works together,” says Anthony Littleton of the culture at the beverage distributor.

Littleton, a five-year employee, has earned a college degree while there, working his way up through areas such as delivery, merchandising and sales. Littleton says that employees are cross-trained to help one another, making for a more cohesive workforce, where each understands the roles of others.

Unlike other companies, if things are busy, upper leadership is not above pitching in, Littleton says. “Some people don’t know what their VPs work on. Ours put on shorts and tennis shoes and are slinging cases of beer,” to help out, he says.

Victor Tang chose to pursue a degree in risk management and insurance from Florida State University. It was a field, he felt, that had ample opportunity. As a Bouchard employee for three years, he says his instincts about the field have proven true.

“The office is young and energetic,” says Tang. “Bouchard does a very good job of hiring Millennials — great talent — heavily recruiting risk management insurance majors,” who aren’t always easy to find, he adds. The dynamic is enriched by the employees who have been on the Bouchard team for decades and are part of the company’s culture of mentorship.

Tang also points to the company’s commitment to community and investment in education.

He earned his certified insurance counselor (CIP) designation in 2016. “Bouchard helped me get that,” adding that he was the youngest out of 30,000 CIP designations in Florida.

A mother of toddlers who are just 18 months apart, Stephanie Quiñones says Gunster has accommodated the changes in her life, while remaining stable and strong in its goals and leadership.

“Leadership has been consistent since I’ve been here,” she says. “There is not a lot of turnover on the board of directors, either.” She has been there for seven years, a testament to her job satisfaction in an industry with high turnover for new attorneys. “The goals and everything have been consistent and put into practice” over that time, she says, such as expanding into Orlando and Tampa and relocating the Miami office.

At the same time, the firm uses surveys to stay in tune with employee feedback. Gunster is respectful of the fact that employees have families and lives outside of the office, says Quiñones. The firm recently organized a multi-office Family Day at Miami’s Marlins Park. “Family first is always their motto,” she says.

“We have a ton of autonomy in the ability to make impactful decisions,” at livingHR, says Michaela Kennedy. “I have a lot of ownership in the decisions I make and the outcomes. If one of us makes a decision and it doesn’t end up being the right one? We’re all quick to own that mistake and bring it to resolution,” she says.

Within the company’s culture, it’s OK to try new things, creating unique opportunities to learn by doing. Twoyear employee Kennedy says she’s learned things she never thought she would, such as invoicing and coding, in a supportive environment.

The human resources consulting and recruiting company promotes not only a work-life balance, but work-life integration. “I am able to work wherever and whenever makes sense,” Kennedy says, even running errands during traditional workday hours, as long as the work gets done. The company believes in good communication, flexibility and trust in its employees.

One-year employee Jacqueline Miller says Lanier Upshaw encourages workers who have been at the company for decades to share their experience and knowledge with newer workers like her. “They can be educated and develop experience from these more seasoned employees,” she says.

The on-the-job learning ensures that the company is in good hands for future generations, which is in all employees’ interests since Lanier Upshaw has an employee stock ownership program. “This is the next generation of the company. They look at it as an investment in their investment,” says Miller.

But learning goes both ways.

Lanier Upshaw knows it is in an evolving industry.

“They are so open to listening to younger voices,” Miller says of the company — especially new ideas and technology that can streamline processes or better serve its clients.