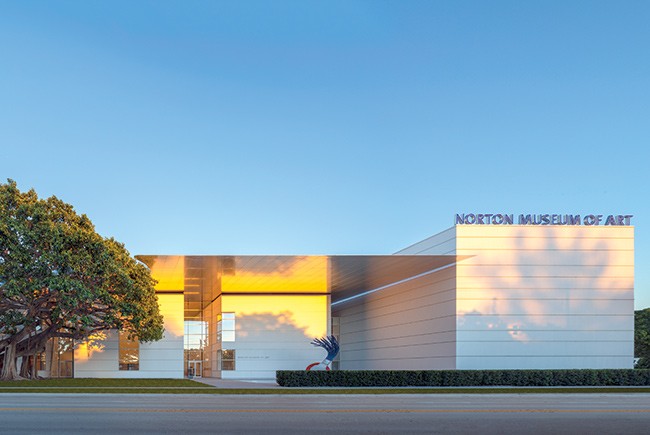 Record numbers of visitors flock to the Norton Museum after a $100-million renovation.

In February and March, the Norton Museum of Art in West Palm Beach hosted 66,000 visitors, a record for any two-month period in the museum’s history and more than double its best two months ever.

The months, not coincidentally, happened to be the first since the museum unveiled a $100-million expansion and makeover that won Norton acclaim in architectural reviews nationally. Scott Benarde, spokesman for the museum, says art donations also are up since the reopening.

The Norton Museum, designed by Marion Sims Wyeth, dates to 1941, when it was founded by industrialist Ralph H. Norton and his wife, Elizabeth, to house their 300-piece collection of American, European and Chinese art. Its collection now numbers more than 7,600 objects, and the museum lays claim to having the widest, most diverse collection of art south of Richmond, including photography and contemporary art.

The expansion, begun in 2015, was directed by Lord Norman Foster and designed by his London-based Foster + Partners. It reoriented the museum entrance to its original design, added a sculpture garden and a 59,000-sq.- ft. wing that includes gallery space, an auditorium and classrooms.

Thanks to donations from the Lunder Foundation and Lunder family and the Anna-Maria and Stephen Kellen Foundation and Damon and Katherine Mezzacappa, the Norton offers free admission on Fridays and Saturdays.

If you need to brush up on the rules for basketball, Florida Atlantic University can help you — with a set with notes penned by James Naismith.

The rules, and the uniform pants Babe Ruth wore on his first day as a Yankee, the uniform Hank Aaron wore the day he broke Ruth’s home-run record and another 559 pieces of sports memorabilia will be housed in December at a new FAU museum. The Fogelman Sports Museum originated after Boca Raton resident and former Kansas City Royals owner Avron B. Fogelman gave the school his sports collection and $1.8 million to build and staff a 3,500-sq.-ft. home for it.

“It is a living, breathing account of our country’s history, America’s pastime and other sports told through artifacts, my own personal stories and the stories of my friends,” Fogelman said in a news release.