Late to game: Teaching in India 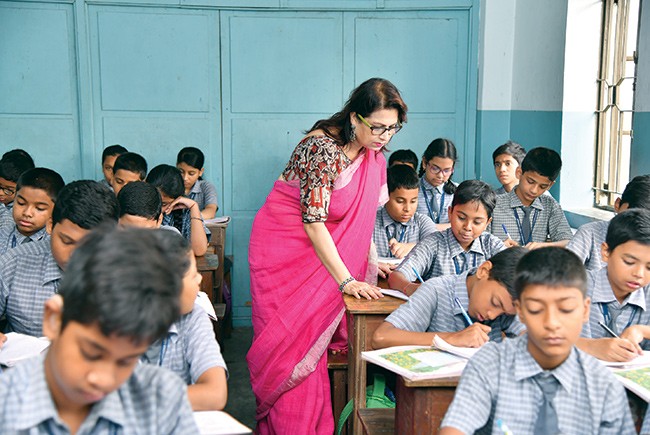 India only recently made education a fundamental right.

The opening bell rings at 7 a.m. at Hirendra Leela Patranavis School in the Indian city of Kolkata, summoning the kids to assembly. Then the students are sent off to class — and 56 of them squeeze into Sanjukta Mukherjee’s classroom.

Mukherjee, 58, who teaches English, history and geography to 11- and 12-year-olds, says she’s had as many as 65 kids in a single class, “so I find the class pretty small and quite easy to manage. The most important thing is to make the lesson interesting to them. You have to hold their attention because you are holding the attention of 65 children together. You can only teach when they are all listening to you.”

It’s a reminder of one of the biggest challenges facing teachers in the world’s second-largest country that is, in some respects, only beginning to develop its system of public education. India has nearly 1.4 billion people, but it was only a decade ago that the country established education as a fundamental right and guaranteed free and compulsory education to children between 6 and 14.

The country now struggles with both congestion and quality. There are, on average, 35 students for every primary teacher in India, according to UNESCO — double the ratio in China and the United States. And nearly one-third of teachers lack adequate training, according to the same agency.

Crowding is especially intense in the country’s booming private schools, which have grown much faster than government schools in recent years. Some private schools get financial support from the government. Many are English-language.

Mukherjee’s school is private. She says the school draws from families who can’t afford to send their kids to more costly schools. “Some of our students are first-generation English speakers,” she says.

Mukherjee says most classes have between 55 and 65 students. She teaches 22 classes a week, averaging between four to five a day. Her biggest complaint? “We have no space,” she says. “We need more places for dividing the class, but then we would also need to find more teachers. And having teachers is also paying for them.”

Teachers at private schools earn substantially less than their government school counterparts, says Suvarna Kuppa, the principal at St. Peter’s High School, a private school in Hyderabad in southern India’s Telangana state. But she says the public system is rigid; teachers can’t move around very easily and don’t have as much flexibility in what or how they can teach.

“I would rather compromise on the salary and look at the very friendly and helpful atmosphere at a school,” she says.

As an example of the flexibility private schools have, Kuppa notes that her school emphasizes public speaking for all students. Every student at the school studies drama and participates in Model UN.

“I don’t handpick a few of my students. The entire group is trained,” Kuppa says. “There should be a very clear strategy of shifting away from (test) scores. We are forgetting about enjoying learning.”

Oversight of that system is split between the central Indian government and the country’s various states and territories. The national Ministry of Human Resource Development sets teacher standards, oversees curricula and textbooks, and develops performance goals. Partly because of distrust of government schools and partly because of demand, enrollment in private schools between 2010-11 and 2014-15 rose by 16 million while enrollment in public schools fell by 11.1 million. The shift has also been driven by increasing interest in English-medium instruction, which is common in private schools. Hindi is the most common language of instruction in public schools.