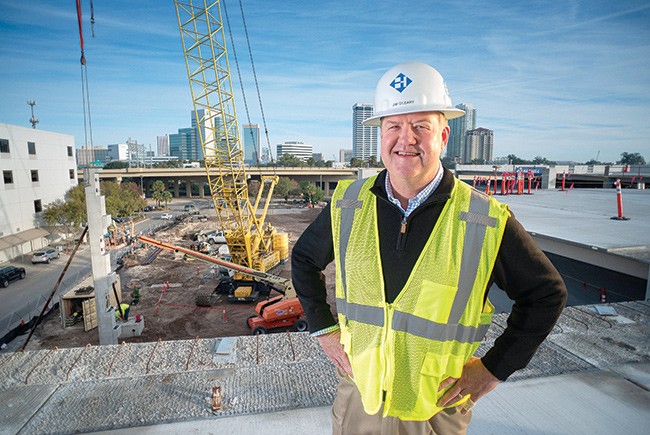 “I anticipate a steady economy in 2019, even slight expansion. However, in 2020 things may change. In recent months, President Trump’s cut in the corporate tax rate and regulation reform have contributed to considerable manufacturing expansion. But trade volatility and tariffs between the world’s largest economies will certainly have a cooling effect over time. Nonetheless, we see growth opportunities in the core markets we serve, including food and beverage, water treatment, health care, government and manufacturing. A tight labor market and rising wages remain our greatest concern, but this has us laser-focused on a workforce development plan that supports our vision for growth.”

“Like other charities, we had a significant pick up in donations in late 2017 with the new tax law. Some people accelerated or bunched their charitable giving at the end of 2017 and then sat out 2018. That means potentially 2019 could be a better year for charitable giving. When the economy is strong, donors have appreciated assets and additional dollars they can give to non-profits. There’s a fair amount of optimism about the economy, but I think it’s balanced by questions about when we might see another recession. It’s equal amounts optimism and pessimism.”

“We have 1,144 locations in 45 states, Puerto Rico and Canada. In 2019, we expect to develop between 75 and 100 restaurants. The biggest variable is availability of real estate. One of the downsides of a really robust economy is that rents typically go up. Yes, there’s new commercial development, but it can be very high-priced. There are some areas where rents have really gotten prohibitive for a business like ours. Florida historically has been a very strong market for us. In Florida, we’re looking at an 8% increase in same-store sales for 2018. Tourism has been terrific, and it’s been a great business environment. If the overall economy continues to function as it has, I would expect that to continue.”

“We have experienced a slowdown in sales in the last 60 days. I think uncertainty surrounding the elections and interest rate pressure were the cause of that. We’re looking for things to level off and growth to resume in 2019. Throughout Florida, we have 14 different communities that are in some state of development or completion. We’re fairly bullish on Florida. Household formations continue to increase as millennials enter the housing market — and they will enter the market once they get married and have kids. Florida also continues to enjoy growth in retirement housing, and we’re still a strong job-growth state.”

“I don’t think we’re looking at a recession anytime soon. U.S. stocks, even at today’s levels, are still overvalued by most metrics. Our advice to our clients is not to get out of stocks because there’s really nowhere else to go — bonds also are in a downtrend. We think you should look for deep-value opportunities where you can buy high-quality stocks that already have most of the air let out of the bubble — they’re cheap — and pay nice dividends. The big wild card is China. The administration has made significant progress in improving our trade relations with most of the world, but not with China. I think the China situation will be acceptably resolved — it’s in both countries’ interests to do so — but if it’s not, it could eventually drag the U.S. into a recession. Otherwise, I think we’ll see continued growth in the U.S. economy for the next year and a half.”

“Jaxport has now achieved more than a decade of year-over-year revenue growth. We expect our Asian container business to experience further growth as the project to deepen our harbor to accommodate more cargo aboard the largest ships progresses and the industry continues to recognize the efficiencies and cost-effectiveness of using Jaxport. Because of unsurpassed rail and road connectivity, Jaxport can reach more than 70 million consumers within a one-day truck drive.”

Entering 2019, class A office vacancies remained at historic lows in Jacksonville, even with the addition of 200,000 square feet of class A space in 2018, according to a report from commercial real estate firm Cushman & Wakefield. The firm predicts “solid growth for the overall market” with the tight supply of class A space driving higher demand for class B space this year.

Class A rents have risen an average of 5.4% annually over a three-year period to $22.95 a square foot. Overall, the increases were driven by demand for buildings on the north and south banks of the St. Johns River in the city’s central business district, according to the report. “Office market fundamentals should maintain current trends with further improvement in rental rates on lower availabilities.”

The report, authored by C&W Research Director Chris Owen, noted that the Jacksonville market had added 21,600 jobs in the past year, an annual growth rate of 3.1%.

“Office-using employment, including professional and business services as well as financial activities, grew faster in the metro than statewide over the year. Jacksonville and all of Northeast Florida has remained a magnet for firms looking for an experienced workforce in one of the lower cost markets in the Southeast,” Owen wrote.

BAKER COUNTY — California-based furniture distributor Starsong & Co. purchased a 95,000-sq.-ft. facility that had been vacant since 2007. Starsong plans to use about 53,000 square feet for its own distribution operations and lease the rest to other tenants.

BRADFORD COUNTY — The county granted a height variance to allow a four-story Holiday Inn Express to be built near Starke. The hotel will have 77 rooms.

CLAY COUNTY — The Florida Department of Transportation completed an initial portion of the First Coast Expressway, a 12-mile toll road that will connect I-10 with I-95. The segment runs from Blanding Boulevard through Clay north to I-10 in Duval County. A second section, due to begin construction this year, will run from Blanding south through Green Cove Springs.

COLUMBIA COUNTY — The county will use $3.1 million from the state’s job growth fund to build a rail spur to the North Florida Mega Industrial Park, a planned, 2,600-acre site owned by Weyerhaeuser.

GILCHRIST COUNTY — Since its recessionary peak of 11.6% in January 2010, Gilchrist’s seasonally unadjusted jobless rate has fallen to 3% as of October. That’s still above its prerecessionary low of 2.5% in April 2006.

HAMILTON COUNTY — The town of White Springs received $50,000 from the Florida Recreation Development Assistance Program. The money will be used to renovate a basketball court, baseball field and playground equipment at the Ogburn Recreational Facility.

LEVY COUNTY — The town of Inglis secured money for an engineering study to explore construction of a 65-acre whitewater kayaking venue.

NASSAU COUNTY — University of Florida Health began building a medical outpost in Wildlight, a master-planned community east of I-95. The 40,000-sq.-ft. building will include space for primary and urgent care, imaging, pediatrics, obstetrics and gynecology, mental health services and dentistry. UF Health also plans to build a 35,000-sq.-ft. wellness center with a YMCA branch in Wildlight.