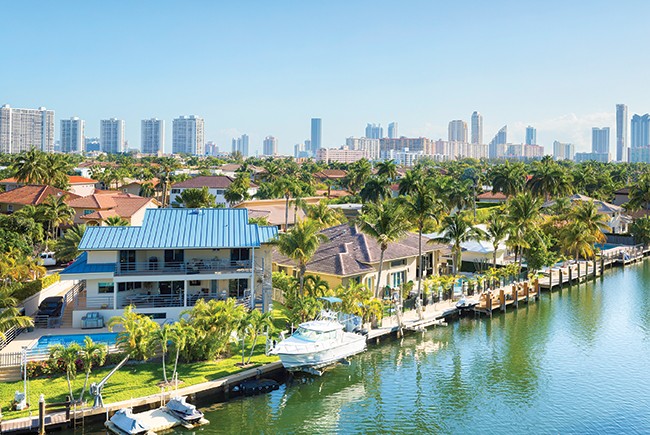 “Housing affordability is probably one of the top economic issues for Miami- Dade in 2019 because the housing market is expected to face significant challenges from rising interest rates, higher construction costs and limited income growth. The affordability of housing will have a direct impact on Miami’s long-term ability to attract and retain businesses, as well as retain talented and educated professionals.

Limited supply has caused land values to skyrocket and has significantly increased the cost of living in South Florida. While international migration continues to drive the population of Miami higher, domestic migration in South Florida has been negative for the past several years and is projected to be negative for the foreseeable future. Rising home values, coupled with belowaverage salaries, are pushing many families to relocate to more affordable areas.”

“Two sectors poised to fuel Miami-Dade’s economic growth are health care and higher education. These continue to be the largest sectors for us, with the highest demand for expansion work and new construction. Health care systems are investing in expansion and innovation to increase efficiencies and provide better health care services to a growing and aging population. On the education side, both K-12 school systems and colleges and universities locally are experiencing enrollment growth and looking for ways to expand and upgrade their campuses to better serve students.

“Florida’s construction sector has been extremely active in recent years as demand for commercial development, public-sector projects and infrastructure upgrades rises. As we look ahead at 2019, the demand for skilled labor in Miami-Dade and across the state is expected to put upward pressure on subcontractor pricing, as will tariffs on certain raw materials used in construction.”

“As the labor market continues to tighten, the ability to attract highly skilled professionals and add depth to our talent pool will define the future of the South Florida region. As much as we are a global city, Miami does not have the number of feeder universities as some larger, legacy markets, and we need to bridge that gap by drawing in new talent and actively promoting the lifestyle and career opportunities that are available here.

Miami’s tech market has grown by leaps and bounds in recent years. We need to do a better job of spreading that message and getting professionals in the tech field here to fill jobs and meet the hiring needs of these innovation-driven companies.

The rise of co-working and how it is impacting Miami’s office sector will keep making headlines. While the Brickell and downtown office markets remain very tight, co-working has been a major driver of new absorption in the urban core and is now spreading out and generating activity in the region’s more suburban markets as well. The expansion and popularity of co-working is helping to grow Miami’s entrepreneurial ecosystem, and it will be interesting to see how this trend influences the future of our business landscape and tech sector in particular.”

“The top economic issue, in my view, will be the overall continued development of newer industries in Miami-Dade. We have seen a large increase in technology- and medical technology-related business over the last five years, and this has assisted us in diversifying our economy from the more traditional trade, tourism and financial services that have been the mainstays of growth in Miami.

From both a jobs and real estate perspective, the most interesting trend to watch is whether Miami continues to benefit from jobs moving into the market from higher tax rate environments.

While Miami as a whole is doing well, many of our citizens are not, and the number of people living below the poverty line is a continued challenge for our community. Affordable housing, transportation and education are priorities, and finding ways to improve each of these will help unlock opportunity for those in our urban core. The public and private sector will need to work together to find creative ways to make progress in resolving these issues.

It will be important to maintain a high level of vigilance over major geopolitical events that could impact Miami. The most critical one would be the new government in Brazil, which could have a significant impact on trade and tourism.”

“We need to pay attention to better preparing students to enter the workforce, since we are facing a significant job-skills mismatch problem in Miami-Dade County. We need to engage the business community to work with principals, teachers and parents to make them aware of the job opportunities and careers available to students, many of which do not require a college degree. Strong school leadership and support staff help to attract and retain quality teachers and provide stability and consistency for students. We know that closing the job-skills mismatch is achievable by bringing in the business community to work with principals on strategies that will increase schools’ efficiency, attract and retain talented teachers, and educate students on job opportunities and skills necessary to enter the workforce. With students better prepared for jobs, we will see communities evolve and see an improved quality of life, lower poverty and crime rates, and better employees.”

“Can our city, state and federal government make real strides and investments in improving our region’s infrastructure? South Florida has long been defined by urban sprawl and images of clogged highways that have become as synonymous with our region as its beaches and nightlife. Institutionalized mass transit would be a true game changer, and many believe it to be the missing puzzle piece to continued economic expansion and solidifying Miami’s reputation as a world-class city.

“Brightline was a major step forward as the privately funded, high-speed rail has helped reshape how our region views and approaches alternative transit models. Now the public sector needs to get on board by investing in better, smarter transit solutions, such as expansions to the Metrorail, rapid bus corridors, more protected bike lanes, car pool incentive programs and more.

“The Underline, a 10-mile linear park and urban trail beneath Miami’s Metrorail is not only transforming underutilized land, it is driving people closer to transit and promoting smarter development. The Underline will enhance our community by connecting residents, getting them outside and simply being a fun way to engage with people.”

Soccer:Where will David Beckham’s Major League Soccer team build a stadium? In November, voters agreed to allow the city to negotiate a no-bid contract for the team to build on the city-owned Melreese Country Club, next to Miami International Airport. The team has considered several other locations before this, and four of five city commissioners will have to approve any deal. Immediately after the vote in November, an ethics complaint against the team’s owners over improper lobbying stopped negotiations, pending an investigation.

Retail:The largest mall in North America has final approval for construction in the northwest part of the county. Developer Triple Five’s $4-billion American Dream Miami would have 6.2 million square feet of retail, an indoor amusement park, an aquarium, a ski slope, a hockey rink and 2,000 hotel rooms. Just south of it, the Graham Cos.’ employment center was also approved for 4 million square feet of office and retail space, plus 2,000 apartments.

“Future climate conditions in Miami-Dade will be different than they are today. Just as much as our county changed from 50 years ago to today, it will change that much or more in the next 50 years. We will have increased hot days, potential flooding from sea-level rise and other changes. These challenges do not have to become disruptive as long as we commit to working together locally, regionally, statewide and at the national level to reduce our impact to the environment from greenhouse gases

“Already, we have unprecedented local and regional action through the Rockefeller Foundation’s 100 Resilient Cities partnership between Miami- Dade, City of Miami and Miami Beach. Regionally, the Southeast Florida Regional Climate Change Compact recently celebrated its 10th year and has served as a model for regional bipartisan climate action to our state and the nation. At the state level, we have Resiliency Florida, a leading voice in helping communities in their efforts to plan and adapt for the future impacts of weather and sea-level rise.

Miami-Dade County, the City of Miami and the City of Miami Beach are the only multi-government collaboration in the 100 Resilient Cities Network. This partnership will release the Greater Miami and the Beaches’ Resilience Strategy in the spring; it will be a roadmap that sets the course for institutionalizing and implementing public and private partnerships and actions to make our county more resilient to shocks and stressors. This will have the potential to engage cross-sector leaders to ensure we are working together toward a resilient future.”

CORAL GABLES —The city has formally requested to annex several parcels of land, including the Little Gables neighborhood. While county approvals are required before the areas can be annexed, the city will face a challenge applying its strict zoning and planning preferences, as well as its aesthetic, to these areas.

HOMESTEAD —Farming remains an important part of this southwest Miami-Dade city and the areas around it. While recent federal tax law changes will likely benefit many farmers, they’re waiting to see the widespread effects of changing trade deals and immigration policies. Most say the new United States- Mexico-Canada agreement on trade doesn’t provide needed protections against cheap Mexican produce.

MIAMI BEACH —Water is rising faster here than in any other area of the county, with sunny-day flooding an immediate concern. The city continues to invest in raising streets, adding pumps and other mitigation.

MIAMI GARDENS — Miami Gardens is home to the Miami Dolphins’ Hard Rock Stadium and will soon host the annual Miami Open tennis tournament and the 2020 Super Bowl. But it also has the highest murder rate in Florida.

The county approved a community redevelopment agency (a special tax district) near Hard Rock Stadium, with money going to a cultural center for the city, and the city is working to create a town center. It must figure out how to create true economic opportunity for local residents by taking advantage of the stadium’s draw, the plan to build the largest mall in North America — American Dream Miami — on its border and its relative abundance of developable land.