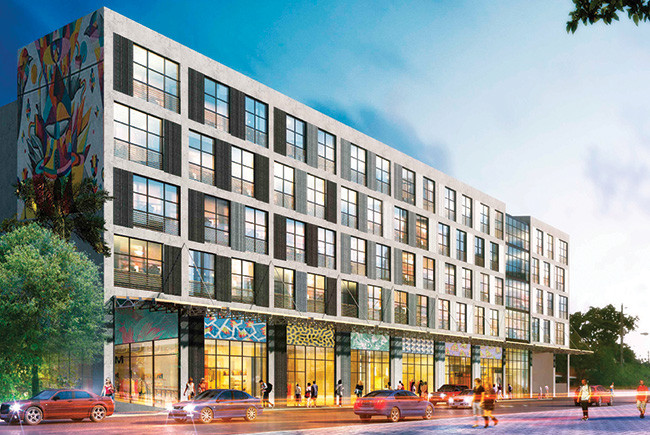 The Orlando Sentinel reported that approximately 8,000 prospective tenants inquired about 201 available units when the Pendana at West Lakes development, a mixed-income apartment complex of one- to three-bedroom apartments, opened near Camping World Stadium. The complex, now completely occupied, has stopped taking applications. It was developed by a partnership of affordable housing groups and features a mix of market-rate and rent-subsidized units. Orlando ranks among the country’s toughest housing markets for the lowest-income renters, according to the National Low Income Housing Coalition.

The same supply/demand dynamics are playing out in South Florida. Over the past five years, the region’s population grew by 369,000. During the same period, 42,388 apartment units were built. That’s one unit for every 8.7 net new residents, according to Cushman & Wakefield.

In Miami-Dade County, the school system and housing department are considering whether to build housing for teachers as part of a new school in the Brickell area. The county is discussing the idea with federal officials. Meanwhile, JPMorgan Chase has given a grant to a non-profit to develop plans for a separate project that would involve building 300 apartments on the campus of an elementary school north of downtown, according to the Miami Herald.

Since 2006, Palm Beach County has had a program that allows developers to build at increased densities if they include a percentage of price-capped, workforce housing units as part of their developments. The program has largely failed, producing about 870 apartments and townhomes but no single-family homes. Developers have chosen to pay an $81,500 "buyout fee” instead of building the workforce housing, according to the South Florida Sun-Sentinel. County commissioners are now considering whether to raise the buyout fee and offer developers even greater density, and a consultant has recommended offering developers a guaranteed 10% profit on the affordable housing units.

Help from the State

In addition to federal programs administered by the state, Florida has two major affordable housing programs: The State Housing Initiatives Partnership (SHIP), which gives money to cities and counties to provide homeownership and rental assistance to low- and moderate-income residents, and the State Apartment Incentive Loan (SAIL) program, which provides low-interest loans to developers to build affordable rental housing.

Since 1992, more than 207,000 housing units statewide have received assistance under SHIP and more than 75,000 units have been financed through SAIL, according to the Florida Housing Finance Corp., which administers the programs. In all, $4 billion of Sadowski money has gone to providing affordable housing, while $2 billion has been swept for other purposes, translating to about 165,000 units foregone.

"It’s become the norm to use the trust fund for member projects or to fill deficits," says Jaimie Ross, executive director of the Florida Housing Coalition, a Tallahassee-based non-profit that advocates for affordable housing. "Fortunately, this may be coming to an end."

State Sen. Kathleen Passidomo, R-Naples, plans to introduce a bill next year to stop the raids on the fund. Ross says she’s encouraged that affordable housing has emerged as a top political issue this fall. "We expect there will be more than $300 million in the state and local trust funds for 2019-20, and we need every penny of it and more," she says.

3-D printing involves using heat and force to fuse materials like powdered metals and plastic. The process doesn’t require injecting the materials into a mold or carving an object out of a block of material. Instead, metal or plastic is applied layer by layer until the object emerges. The "printer” allows for control and precision and produces very little waste. 3-D printers are now used routinely to manufacture items like engine parts and prosthetics, including dental implants.

Since the mid-1990s, researchers have experimented with ways to apply 3-D printing technology to construction. In recent years, builders in China, the Netherlands and the U.S. have produced small buildings in which concrete is applied, layer-by-layer, until the basic structure is completed. In some cases, a crane-like robot with an arm lays down the concrete; in others, a gantry-like structure allows an applicator nozzle to move around, dispensing concrete.

The relevance of the technology to affordable housing is its potential to reduce construction costs. Less than two years ago, a company called Apis Cor printed a 400-sq.-ft. home in Russia for about half the cost of traditional construction. In March, a non-profit in Austin called ICON unveiled a 3-D printed home using a printer it says can produce a 600- to 800-sq.-ft. structure in less than 24 hours for less than $4,000.

An Englewood man, Don Musilli, is trying to bring the technology to Florida. He got interested in 3-D-printed homes after creating the non-profit Englewood Innovation Center, which teaches basic 3-D printing skills to K-12 students in Sarasota County. Since 2012, he has helped place desktop 3-D printers in more than 50 schools, libraries and youth organizations in Southwest Florida.

Thirty years ago, Musilli founded a manufacturing company, Pure Air Systems, which he’s since sold, that introduced high-end air-filtration systems to the residential market. He has now formed 3D Build Systems to develop a 3-D printer that he says will be able to build the basic structure of a house in 24 to 36 hours. Each printer will cost more than $250,000, he says.

Using the printer, a home that today would cost about $250,000 could be printed for $150,000 or less, Musilli says. Cost savings come from both materials and labor — only a couple of workers are required to operate the printer that creates the shell of the house, with additional labor required to install the roof, windows and plumbing and electrical systems. Musilli believes the entire process ultimately can be automated.

Last year, Musilli hired a company in Ontario to create software to translate architectural plans into printing instructions that a robot can follow. He now owns the software and is working with another Canadian company, i-cubed, to develop a robot that can print cement up to a height of 13 feet and a width of 22 feet, for homes between 400 and 1,900 square feet. He says he hopes to have a robot ready for testing and fine-tuning by the end of this year. After that, he plans to lease or license it to local builders.

Obstacles remain, including a lack of industry standards — and whether the printed structure can meet state building regulations. "The first thing people ask us is, ‘What about the building codes?’ The reality is it’s just a different method of making a wall,” he says.

And even if 3-D printing lowers construction costs, it can do little about rising land costs and other things that go into the price of a new home, including impact fees, permits and utility hookups. Those "soft” costs account for about 40% of a home’s total construction costs, according to the non-profit Florida Housing Coalition.

Damon Allen, an adjunct professor in the School of Construction Management at the University of Florida, says it’s up to entrepreneurs like Musilli to invest the time and money required to take 3-D-printed homes mainstream.

Miami-based Related Group is building two micro projects in the Wynwood neighborhood. Each unit will have a kitchen, bathroom and a bedroom. Studios will have bedrooms that double as a living room. Rents are expected to start at $1,400. To offset the smaller unit sizes, the buildings will have pools, fitness centers and dog-washing stations, among other amenities.

In April 2017, West Palm Beach’s downtown zoning board approved plans by developer Jeff Greene to build 348 apartments of about 450 square feet. Greene said he hoped to set rents at less than $1,000. He has since pulled his plans, telling the Palm Beach Post he had underestimated the cost of providing amenities.

With many hotel and restaurant workers priced out of the local housing market, the Keys have become a focal point of Florida’s affordability crisis. Last year, the situation was made worse by Hurricane Irma, which destroyed nearly 1,200 homes in Monroe County.

In August, Monroe officials called for proposals to build "tiny” houses on county-owned land for people displaced by Irma. Initially, the houses will be used to demonstrate inexpensive ways to build small, affordable replacement homes.

The county does not define tiny, but each house must be able to fit on a small lot. Proposals will be scored higher for "home-like” features, energy efficiency and environmental sustainability, says Assistant County Administrator Kevin Wilson. The county says it eventually might use the structures for its own employees. Monroe already uses county-owned dwelling units at Big Pine Key Park and Key Largo Community Park to house several employees.

"We want to show that you can bring an affordable solution for the construction of a house to existing properties on the Keys and make it sustainable and compliant with all the codes,” Wilson says.

In St. Petersburg, city officials approved plans for six houses of about 720 square feet at the site of a condemned apartment building due for demolition. Each house will have two bedrooms and a porch and initially be rented out. "A lot of people don’t need much to be comfortable and happy,” developer Pedro Medina told the Tampa Bay Times. "There is something efficient, sexy and modern about tiny houses.”

Crisis Housing Solutions (CHS), a Davie-based non-profit founded in the wake of Hurricane Katrina in 2005, aims to build one of Florida’s first apartment complexes made of repurposed shipping containers. Last year, CHS received a $450,000 grant from JPMorgan Chase to create housing in Central Florida for working-class families. The non-profit estimates that shipping containers can reduce construction costs at least 15% compared with traditional concrete blocks.

"We could do something on as little as a half-acre. It would have 16 to 20 units in a three-story garden-style complex,” Smith says. "The whole purpose of the program is to come up with a way to reduce construction costs and increase the supply of affordable rental housing.”

Read more in our November issue