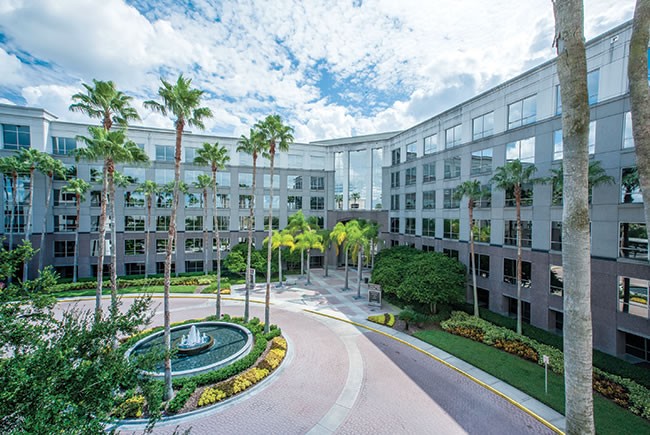 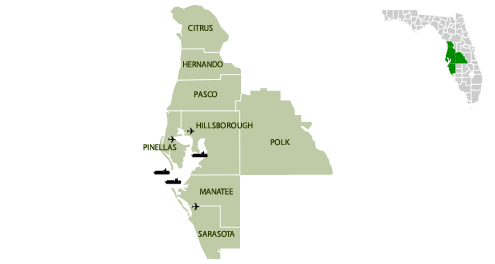 Tampa Bay — Florida’s second most populated region and home to such corporate heavyweights as Tech Data, Jabil Circuit, Raymond James and, soon, The Mosaic Company — is on a roll. In 2017, the Tampa-St. Petersburg-Clearwater MSA was No. 15 on Milken Institute’s “Best Performing Large Cities” list, up 18 points from the previous year. And at No. 16, Tampa is the only Florida metro to make WalletHub’s 2018 list of the top 20 “Best Big Cities to Live In.” In Tampa Bay, companies prosper, connections are seamless, downtowns are alive, educational institutions earn accolades … and the welcome mat is always out.

Tampa Bay has all the elements required of a successful logistics and distribution sector: the state’s largest seaport and its closest deepwater ports to the Panama Canal; a top-rated international airport; superior rail connections; and an extensive interstate highway network that puts 33 million consumers within an eight-hour drive. It’s no wonder, then, that distributors like Gordon Food Services, O’Reilly Auto Services, Amazon, Walmart and Wayfair and third-party logistics providers like Blue Grace Logistics, Integrity Express Logistics, Quality Distribution and Total Quality Logistics have all chosen to site facilities here.

Tampa Bay is just plain easy to get into and out of:

• By Sea: Port Tampa Bay is Florida’s largest port by physical size (5,000+ acres) and cargo tonnage. It is also among the nation’s most diversified, handling all major cargo categories, including liquid and dry bulk, containers, commodities and automobiles. In FY2017, 38.1 million tons of cargo passed through the port, including 56,555 TEUs of containerized cargo. During the same period, Port Tampa Bay welcomed 226 cruise ships and 960,901 cruise passengers, an 18% increase over the previous year. On the southern edge of Tampa Bay, Port Manatee shattered cargo records, moving 39,276 TEUs in 2017 for a 52% increase over the previous year, and 7.8 million total cargo tons, its best year ever. In 2017, Port Manatee upgraded its 625-foot-long Berth 9 to accommodate loads of up to 1,000 pounds per square foot.

• By Road: Interstate systems I-4, I-75 and I-275 directly link Tampa Bay to Miami, Orlando, Jacksonville, Pensacola and all points in between and beyond. A new truck ramp from Port Tampa Bay leads directly to and from I-4, which connects to I-75 less than 10 miles away.

Tampa Bay is at the epicenter of medical innovation and cutting-edge patient care. Some 14% of Florida’s biotech companies and 22% of its pharmaceutical and medicine manufacturing workforce call this region home. A long-standing success story here is WellCare Health Plans. Founded in Tampa more than 30 years ago, WellCare provides government-sponsored managed-care services to some 4.4 million members nationwide. In September 2018, WellCare acquired Michigan-based Meridian Health Plans and, as a result, has become Tampa Bay’s biggest company by market value.

Over the last five years, significant developments across this sector testify to its growing strength in Tampa Bay. Bristol-Myers Squibb got the ball rolling in 2014 with the opening of its North American Capability Center in Tampa and, within a year, Johnson & Johnson announced plans to establish a global services center here too. That facility, which opened in 2016 with 240 employees, is on track to add another 300 employees by 2020. On the heels of these developments have come Aimmune Therapeutics, which in 2017 established a manufacturing facility in Clearwater for the development of biopharmaceuticals to treat life-threatening food allergies, and Amgen, which in February 2018 opened a capability center for drug research and testing in Tampa.

Job opportunities in the life sciences sector are on the rise too. Greenway Health, an IT vendor of integrated electronic health records and management solutions for health care practices nationwide, and Corin USA, an orthopedic device manufacturer, have announced plans to add 100 jobs each at their Tampa-based headquarters.

Tampa Bay’s thriving health care sector includes an education component. In 2012, the University of South Florida opened CAMLS — Center for Advanced Medical Learning and Simulation — in downtown Tampa to provide state-of-the-art, hands-on learning opportunities for practicing physicians and medical students. Nearby, USF is constructing a medical school in close proximity to its teaching partner, Tampa General Hospital. USF Morsani College of Medicine and Heart Institute is scheduled to open in its downtown location by early 2020.

Also worth noting is this region’s excellence in patient care. Two Tampa Bay hospitals are listed among the nation’s top 50 according to U.S. News & World Report’s “Best Hospitals 2018-19.” Moffitt Cancer Center, a National Cancer Institute-designated Comprehensive Cancer Center, was cited as No. 8 for cancer care and No. 40 for gynecology. Tampa General Hospital was named Florida’s No. 2 hospital and earned accolades in six specialties.

2017 was a good year for tourism on both sides of Tampa Bay. Hillsborough County’s tourism tax revenue jumped 8% over 2016 for a total of $32.3 million. Pinellas County fared even better with collections of more than $56 million, up 8.5% from the previous year. Helping to fuel these increases was the combination of a long winter storm season in the north and thousands of Clemson and Alabama fans drawn to Tampa for the college football national championship game.

Thanks to a host of new attractions, 2018 looks promising tourist-wise too. Recently opened are the new James Museum of Western & Wildlife Art in St. Petersburg and the nation’s first Crystal Lagoon in Wesley Chapel. Coming soon are three hotels on Clearwater Beach; a virtual reality roller coaster and a second hotel at LEGOLAND Florida; and $6 million in upgrades for ZooTampa at Lowry Park.

To say that Tampa Bay beaches are America’s best is no exaggeration; it’s fact. Clearwater Beach took the top prize on TripAdvisor’s “2018 Top 25 Beaches, U.S.” and ranked 7th worldwide (the only U.S. beach to make its international list). Also earning spots on TripAdvisor’s U.S. list: Siesta Beach just south of Sarasota at No. 2 and St. Pete Beach at No. 7. A fourth Tampa Bay beach — Caladesi Island State Park in Dunedin/Clearwater — snagged the No. 7 spot on Stephen Leatherman’s (aka “Dr. Beach”) 2018 list of America’s 10 best beaches for the second year in a row. And for swimmers who value safety over sand, another win: Manatee County’s 15-member lifeguard team, which oversaw more than 2.7 million beachgoers in 2017, was named “Beach Patrol of the Year” by the Florida Beach Patrol Chiefs Association.

Elsewhere in the region, work continues in North Port on a spring training facility for the Atlanta Braves. The project, which includes a 6,200-seat stadium, a 360-degree concourse walkway, luxury suites, six full- and two half-sized practice fields and 750 parking spaces, is on track to host the Braves’ final spring training game in 2019. Coincidentally, North Port and neighboring Sarasota were among the nation’s top 50 best small cities to start a business, according to a recent report from Verizon.

Meanwhile, the Tampa Bay Rays unveiled plans for a ballpark they hope to build in Tampa’s Ybor City neighborhood. Cost to construct the stadium, which would feature a translucent roof over the outfield and 28,216 seats, is estimated at $892 million. While details are finalized, including how to pay for the project, the Rays will continue to play at Tropicana Field in St. Petersburg.

Downtowns across the region are coming alive, too. Activity is ramping up at Water Street Tampa, the $3-billion, mixed-use redevelopment project taking shape in downtown Tampa’s Channel District. In April, the first phase of vertical construction began with a groundbreaking for the 26-story JW Marriott luxury hotel. Over the coming year, developers anticipate construction to be underway on 10 of Water Street’s planned 22 buildings, with openings anticipated as early as summer 2020.

Tampa isn’t the only downtown venue undergoing transformation. Across the bay in St. Petersburg, 17 major construction projects are underway downtown — from high-rise apartment buildings to a new police station — for a total of $500 million. Likewise, Clearwater is moving ahead with “Imagine Clearwater,” a $555-million redevelopment plan to transform the city’s downtown waterfront and Coachman Park areas with the addition of public gardens, a concert venue, gateway plaza and walking paths overlooking Clearwater Harbor.

Tampa Bay’s largest university — the University of South Florida — is having quite a run. In 2017, USF received a record 116 U.S. utility patents, propelling the university to No. 5 in the nation — and No. 12 worldwide — among public universities for patent production. In June 2018, USF was designated a “Preeminent State Research University” by the Florida Board of Governors. The long-sought title held by just two other schools — UF and FSU — rewards high-achieving universities based on 12 metrics, including graduation rates, research expenditures and patent production. And in August, USF became home to a chapter of the prestigious Phi Beta Kappa Society.

Good things happened at other Tampa Bay educational institutions too. Florida’s newest accredited university — Florida Polytechnic in Lakeland — graduated its first four-year class in May 2018. At Florida Southern College — best-known as home to the world’s largest single-site collection of Frank Lloyd Wright architecture — the Barney Barnett School of Business and Free Enterprise was included for the first time in The Princeton Review’s “Best Business Schools.” And in Sarasota, the newly created Cross College Alliance allows the 16,000+ students enrolled at New College of Florida, USF Sarasota-Manatee, Ringling College of Art & Design, State College of Florida Manatee-Sarasota and FSU/Ringling Museum to cross register for classes and compete for internships and job opportunities countywide.