Growing businesses need skilled workers, and Florida has plenty. At 10.1 million, Florida’s civilian workforce is third largest in the nation and one of the most culturally and linguistically diverse. One-fifth of Floridians were born outside the U.S. and nearly one-third speak a language other than English at home.

Florida’s workforce is also highly trained. In 2017, Business Facilities magazine named Florida No. 6 among U.S. states for workforce training, and no wonder. A combination of superior educational resources and practical training programs that may be customized to individual company and/or industry needs makes it possible for employers to readily connect with skilled workers at all levels.

Educational Excellence
Florida is home to 12 public universities and 28 state and community colleges, plus dozens of private colleges, universities and technical schools — and no Floridian lives more than 50 miles from at least one of them. In 2018, U.S. News & World Report ranked Florida best in the nation for higher education for a second consecutive year, citing such factors as the time it takes for students to complete two- and four-year programs and the cost of tuition and fees.

Florida’s colleges and universities, among the nation’s top producers of STEM graduates, receive consistently high marks for their academics and research activities. Three Florida colleges — Broward College, Indian River State College and Miami Dade College — are finalists for the 2019 Aspen Prize for Community College Excellence. And two Florida universities were among the top 15 worldwide for the number of U.S. utility patents awarded in 2017 — University of South Florida ranked No. 12 with 116 patents; the University of Florida was No. 13 with 111 patents.

At the local level, Florida schools earn accolades too. Florida was among the first states to offer voluntary pre-kindergarten and was the only state to show significant improvement in grades 4 and 8 mathematics and grade 8 reading scores between 2015 and 2017 on the National Assessment of Educational Progress tests. School districts in Duval, Hillsborough and Miami-Dade counties earned top spots for performance among large urban school districts. 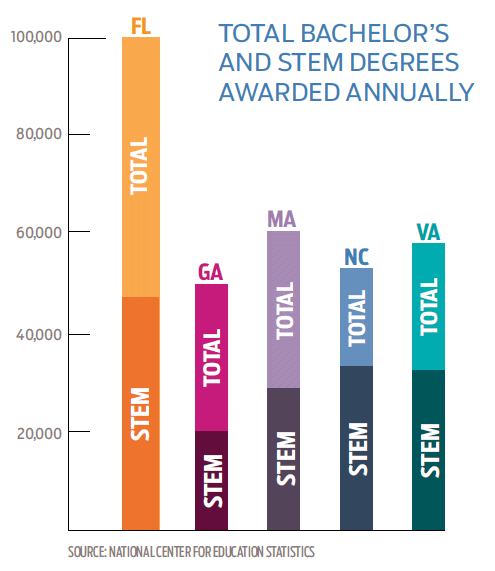