Halloween spending to scare up near record numbers this year

“With Florida’s economy surging and numerous statewide economic indicators remaining positive, we expect another strong year for spending on Halloween candy, costumes, decorations and other themed purchases,” said FRF President and CEO R. Scott Shalley. “This should mean another robust sales opportunity for retailers who market their goods and scare enough consumers into their stores.”

Additionally, the candy favorited most by Floridians changed this year with Snickers beating out last year’s winner Skittles followed by Reese’s Peanut Butter Cups, according to candystore.com. This year, more than 661,000 pounds of Snickers will be bought in Florida, including 579,000 pounds of Skittles and 214,000 pounds of Reese’s Cups. The top five favorite candies nationally are Skittles, M&Ms, Snickers, Reese’s Cups and Starburst 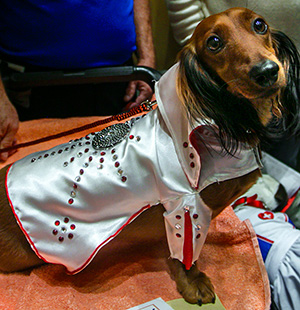 According to a recent survey done by FRF’s national partners at the National Retail Federation, spending for Halloween is expected to reach $9 billion, the second highest in the survey’s 14-year history. The figure is relatively the same as last year’s previous record of $9.1 billion. Celebrants are planning to spend an average of $86.79, up from last year’s $86.13, with more than 175 million Americans planning to partake in Halloween festivities this year.

According to the survey, consumers plan to spend $3.2 billion on costumes (purchased by 68 percent of Halloween shoppers), $2.7 billion on decorations (74 percent), $2.6 billion on candy (95 percent) and $400 million on greeting cards (35 percent).

Pet costumes continue to gain popularity, with nearly 20 percent of celebrants planning to dress their pets in costumes this year up from last year’s 16 percent.

Top Costumes for Adults
Halloween continues to be popular for adults as well, with half of celebrants (48 percent) planning to dress in costume this year. More than 7.2 million adults plan to dress as a witch, 2.5 million as a vampire, 2.1 million as a zombie, 1.9 million as a pirate, 1.3 million as their favorite Avengers characters such as Iron Man or Black Panther.

ABOUT THE FLORIDA RETAIL FEDERATION
The Florida Retail Federation is the statewide trade association representing retailers -- the businesses that sell directly to consumers. Florida retailers provide one out of every five jobs in the state, pay more than $49 billion in wages annually, and collect and remit more than $20 billion in sales taxes for Florida’s government each year. For more information, visit the FRF website, and follow FRF onFacebook and Twitter.