Training the Lifeblood of the Business Community 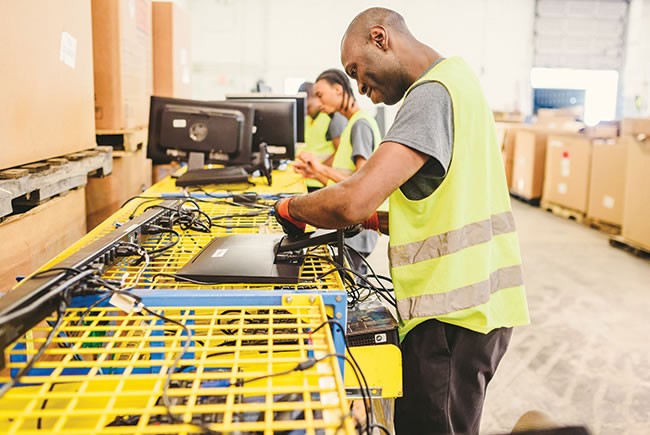 At the Riverside Hotel on Las Olas Boulevard, Vice President and General Manager Heiko Dobrikow is keenly committed to helping his staff learn, grow and thrive in a hospitality industry expected to have 6,000 new hotel rooms come online in coming years.

At JM Family Enterprises, where Chairman Colin Brown is overseeing a multimillion dollar makeover of the company’s Deerfield Beach headquarters, he calls his 4,200 associates “our most important asset.” Nothing he spends on company advancement can outweigh the returns of spending on his fellow associates, he says.

“Just like investing in software or any other aspect of running your business, every expense you make in your associates is an investment,” he says. “If you start doing it that way, it changes how you look at things.”

In a tight labor market, abundant and skilled workers become every employer’s most important asset. Throughout the county, employers, educators and workforce development professionals are taking a renewed focus on how they prepare tomorrow’s employees. Colleges, universities, trade academies and even grade schools are collaborating to offer a wider set of more advanced degrees and certifications.

Job training organizations have been especially busy in Greater Fort Lauderdale, where employers and employees seem well matched. The county jumped 72 places, to No. 36 from No. 108, on the EMSI Annual Talent Attraction Scorecard in 2017. This moved it from the top 18% of large communities to the top 6%.

One in six jobs statewide have been created in Broward County, which bodes well for the 61 new residents who arrive here daily, says Mason Jackson, president and CEO of CareerSource Broward, the county’s federally funded provider of workforce services to employers and job seekers alike.

When Amazon sought bids from cities for its second U.S. headquarters, the three area counties boasted their combined

3 million-person labor pool and 375,000 college and university students. When it comes to talent, Broward is perfectly positioned on the 50-yard line of a rich regional field.

For those companies already here or looking to move and in need of a skilled workforce, CareerSource and other organizations partner with employers, staffing agencies, career and technical colleges and traditional universities to align the skills and talent needs of 10,000 area employers with the 60,000 job seekers who arrive seeking training and advice for their “first, next or better” job, Jackson says.

Partners include the county’s colleges, universities and public schools, the Greater Fort Lauderdale Alliance, the U.S. Small Business Administration, Service Corps of Retired Executives and Hispanic Unity. Jackson’s organization can build on the efforts of the Boys & Girls Clubs of Broward County, whose career day teaches hundreds of area teens about financial literacy, career assessment, in-demand trades or the opportunities that come with a certification or college education.

“The watchword here is collaboration. One call gets us all, and we all work together,” Jackson says. “It doesn’t matter who calls the meeting, we all come. That level of collaboration and cooperation — people say they didn’t have that where they came from.”

Especially critical have been those “middle-skilled” jobs that require more than a high school diploma but less than a bachelor’s degree. These include IT and network engineering professionals; aviation, marine and construction trade jobs that require specific training and apprenticeships; and nursing, health care and life sciences sectors forecast to grow for years to come. For those businesses seeking qualified interns, CareerSource helps place candidates into posts that promise real work experience.

Throughout the labor continuum, employers will find worker educational levels exceeding state and regional averages, with higher percentages of bachelor’s degrees and a lower percentage of those with only a 12th-grade education than in many other markets. The result can be a positive, self-perpetuating cycle that makes the county among the nation’s best in talent attraction and retention, Jackson says. Skills gap studies touching workforce candidates from high school to professionals have bolstered courses related to soft skills across all industries.

Greater Fort Lauderdale’s and Florida’s location at the “crossroads of the hemisphere” also helps attract global talent for the hundreds of area companies doing business throughout the Caribbean, Central and South America, even Europe and Asia. A “majority-minority” county, Broward is rich with ethnic and cultural diversity ideally matched to a flattening world market.

More than 90 languages are spoken throughout the county. For millennials more tolerant and expecting of diversity in today’s market, employers who embrace inclusion, as well as a shared spirit of community service, will find an eager workforce.

“Today’s workforce is more concerned about mission than a job. They want to know what they’re doing is important,”Jackson says. “There’s still the feeling that young people would like to change the world or make a contribution to change the world so they’d like to know their jobs are doing something meaningful.”

The Fresh Face of “Succession Planning”
Corporations take pains to plan for their next generation of leadership. But how do communities prepare for succession planning? Recognizing that millennials represent the next generation of corporate, civic and governmental leadership, across Greater Fort Lauderdale, fresh faces represent the next wave of leaders.

After arriving from South Africa with her family at 15, Lauren Heunis attended a local high school and graduated in 2008 from the University of Central Florida with a degree in communications. She returned to Greater Fort Lauderdale, landing a job with Homestead Miami Speedway before taking a post with the Florida Panthers.

Seeking to become involved in her community, a friend suggested Heunis explore Emerge Broward, a local young professionals networking group. There, she met fellow 20-somethings, all “like-minded professionals trying to do good things,” she recalls. “I said, ‘I’m going to run this organization one day.'” Soon, she was president.

By chance, Heunis met an executive from AutoNation who was looking for a partner relations manager. She jumped at the opportunity. That was almost seven years and three promotions ago. The company’s executive board nominated Heunis for the Automotive News 40 Under 40. In July, she was named an honoree.

Today, Heunis is involved with United Way and Arc Broward, was a member of the Greater Fort Lauderdale Alliance Governor’s Council and a board member of Leadership Broward. “Being in marketing communications, I could work in New York or Boston or California. But connecting with other young professionals here makes this a community where you want to live, work and play,” she says.

Dan Daley, 28, always knew he wanted to be in public service. Even after he lost student government elections in middle school and while at Marjorie Stoneman Douglas High School, he was undeterred.

As an undergraduate at Florida State University, Daley interned for his hometown legislator. Upon his return home, he decided to run for city commission. Eighteen months of campaigning and two pair of dress shoes later, Daley became Coral Springs' youngest elected official ever at 22. After helping advance plans for the city’s $38-million city hall complex, Daley ran unopposed in 2014, while earning his law degree from Nova Southeastern University.

Open and affable, Daley connects well with executives and officials his senior, as well as the students he meets at town halls he hosts. Sure, some among his peers and the next generation are disinterested in civic life. But Daley also sees more deciding, like he did, to become involved, to return to their hometowns, to take jobs in community organizations or to run for office.

“A lot of us don’t necessarily want to wait or kiss the ring of those who came before us,” he says. “I didn’t. In business or government, if I’m the best person for the job, it doesn’t matter that I’m 15 years younger than you.”