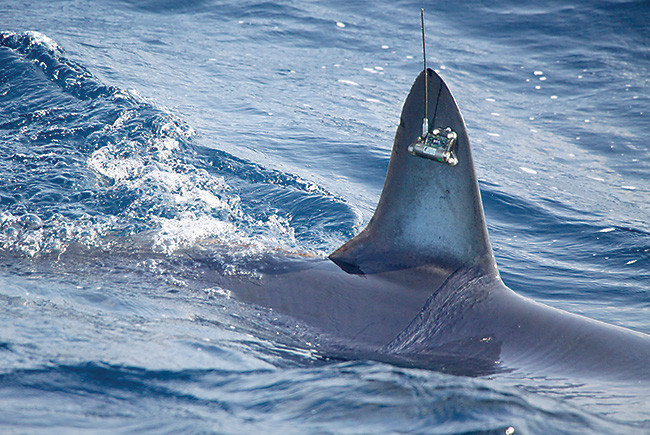 Sharon Marie the Tiger Shark, at last report, was feeding off the New England coast at a spot east of Cape Cod and due south of Nova Scotia. Tagged by University of Miami Rosenstiel School of Marine and Atmospheric Science researchers in April in the Bahamas, Sharon Marie made her way up the Gulf Stream to South Carolina, circled around there for awhile then made a beeline for the north.

In 2017 alone, UM spent nearly 100 days sampling, took along more than 1,100 participants and caught, tagged and released more than 450 sharks.

Tagging sharks with GPS trackers has become both scientifically important to Florida institutions and a way to generate public interest and funding for marine research.

Nova Southeastern University and Jacksonville University, for example, also are in the tagging game. A Nova-tagged shark, Advanced Roofing 3 the Mako Shark, was off Atlantic City in July, having swum nearly 8,000 circuitous miles from near Maryland when first tagged in 2017 south to Wilmington, N.C., and as far north as the doorstep of Newport, R.I. You can track it at ghritracking.org.

NSU’s Guy Harvey Research Institute has satellite-tagged 291 sharks of various species in the last decade. Data led to conclusions that makos are overfished in the western Atlantic, and the overall mortality rate in the northwest Atlantic is 10 times what was previously thought.

Others colleges and institutions also tag.

At UM, a $3,000 donation covers the cost of an individual shark tracker, for which you get to pick a name. Then you and the general public can go to a UM site (sharkresearch.rsmas.miami.edu/ education/virtual-learning/tracking-sharks) and watch the fish’s journeys. You also can go on a tagging voyage with UM researchers for a suggested $300 donation.

Hurricane forecasters have made strides in predicting storm paths with ever-increasing skill. In 1999, the average track error 72 hours out was 300 miles — roughly the distance between Miami and St. Augustine. Now, it’s not even 100. That’s meant a shrinking cone of uncertainty.

What concerns forecasters is that they haven’t made similar strides in forecasting the phenomenon of rapid intensification, in which winds jump at least 35 mph in a 24-hour period, a scary prospect when near land. Forecasters failed to correctly anticipate such intensification the majority of times they occurred in 2017. The government and other scientists have been working to do better, especially through NOAA’s Hurricane Forecast Improvement Program.

Now, researchers at NOAA and the Cooperative Institute for Marine and Atmospheric Studies at the University of Miami’s Rosenstiel School of Marine and Atmospheric Science have unlocked an approach. Using data and models from Hurricane Edouard in 2014, they found a “power struggle” between thunderstorm activity and upper-level atmospheric flows. When thunderstorms in a specific region of the hurricane overpower the upper-level flows to wrap around the storm center, rapid intensification occurs.

“This study could help hurricane forecasting by looking at the hurricane environment in a different way to improve forecasts,” says Hua Leighton, a researcher at NOAA’s Atlantic Oceanographic and Meteorological Laboratory and lead author of the study.

Phosphorus, the second most common fertilizer used after nitrogen, has been one of Florida’s key natural resources. But there’s a limited amount of high-quality phosphate rock.

University of Florida Institute of Food and Agricultural Sciences researcher Zhenli He — a soil and water science professor at IFAS’ Indian River Research and Education Center Fort Pierce — has found a way to extend the resource by turning low-grade phosphate rock into “environmentally friendly phosphate fertilizer.”

He’s method involves dolomite phosphate rock, a low-quality byproduct of traditional phosphate production. It uses naturally occurring organic materials blended with phosphate rock powder to activate the phosphorus in the rock. The resulting fertilizer is slow release, which should mean less leaching — at least 80% to 90% less — into soil.

He is hunting funding for the next step in commercialization.

It’s likely you’ve never heard of Rossby waves. They’re planetary ocean waves caused by the rotation of the Earth and are so slow moving they can take years to cross the ocean. Turns out, they’ve been contributing to nuisance flooding in Florida and across the southeast U.S. coast, according to a new study by University of Central Florida coastal engineering professor Thomas Wahl and colleagues at other institutions.

The waves contribute to seasonal fluctuations in sea level, including an “extreme event” in 2008-09 that was probably unprecedented in the history of tidal gauges in the U.S., their study says. The study comes just a year after separate University of Florida research found four to six inches of sea-level increase along the U.S. southeastern coast since 2011 came from natural atmospheric pressure variations, possibly explaining the severity of nuisance flooding in places such as Miami Beach.

“We can predict high tide and low tide, and we know what causes sea level to vary seasonally, but we found that in some years the seasonal fluctuations are much larger along the Gulf and U.S. southeast coasts than in others, causing more nuisance flooding and increasing flood risk from storm surges during the hurricane season,” Wahl says. “These unusually large seasonal fluctuations were poorly understood, and Rossby waves appear to be the missing piece.”

Florida Institute of Technology’s Human Spaceflight Lab has come up with a new simulator that director Ondrej Doule thinks will provide a space flight experience for a fraction of the cost of current simulators and parabolic airplane flights.

The simulator was built with the idea of an emergency rescue pod in mind — passengers having to control the craft while dealing with high levels of acceleration — but people inside can experience the range of suborbital flight from takeoff to landing, including microgravity, through 360-degree motion and the hyperbaric environment of a space suit.

Doule worked with Sanford-based Servos & Simulation to develop the simulator. “I think we are opening a completely new area of simulation of human spaceflight because we don’t need parabolic flight or to pay $5,000 or $10,000 for this, and we are approaching the general public,” Doule says.

For treating serious conditions such as pediatric schizophrenia, bipolar disorder and certain severe autism behaviors, antipsychotic drugs are a first-line method. But doctors seeking a solution for kids with ADHD and other non-psychotic behaviors have been prescribing anti-psychotic meds “off-label.” Whatever the meds may be doing to address the child’s issues, one thing they may be doing is making the kids fat and setting them on the road to diabetes, according to a new study out of Florida Atlantic University’s med school.

“Over the past two decades, the U.S. has seen a dramatic increase in the use of anti-psychotic medications in children, and it’s not due to an epidemic of childhood schizophrenia or other conditions where anti-psychotics may be lifesaving,” says Dr. John Newcomer, a psychiatrist and senior author of the study who is a professor at FAU’s Charles E. Schmidt College of Medicine. “Rather, it is part of a national phenomenon where children who have non-psychotic disorders with disruptive behaviors are increasingly being treated with anti-psychotic medications.”

Knowing that anti-psychotic use in adults can lead to diabetes, Florida Atlantic University med school researchers working with colleagues from Washington University in St. Louis measured changes in whole body and abdominal fat and insulin sensitivity in 144 children taking anti-psychotics for the first time.

Even just 12 weeks of treatment with anti-psychotic meds can increase body fat and decrease the body’s sensitivity to insulin, the study found.

“We believe it is time to really hit the brakes on the common first line use of these medications in children with nonpsychotic behavior disorders and to implement more consistent front-line use of behavioral treatment options that are available and effective,” Newcomer says.

Last year, University of Miami scientist Daniel Benetti won a nearly $1-million federal grant to spur a partnership with private company Aqquua to create an affordable supply of little fish through captive spawning, with an eye toward eventual aquaculture production of at least one of three species — red snapper, Nassau grouper and hogfish. Benetti, a professor and aquaculture director for UM’s Rosenstiel School of Marine and Atmospheric Science, says the nation’s young marine aquaculture industry needs to develop commercially available seed stock of ecologically and economically important species and a way to live-ship that stock. “This project aims to resolve these issues and will allow for commercial producers to have access to low-cost, reliable supplies for the culture of a variety of native marine finfish,” Benetti says.