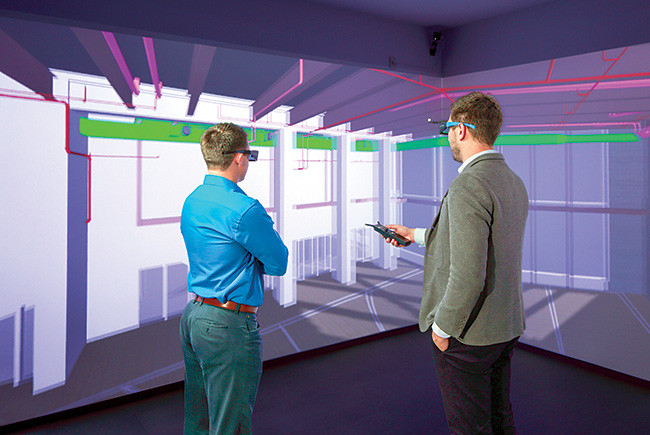 Mechanical and electrical engineers, plumbers, steel workers and architects “design in their own world, and when you bring them together, they haven’t thought about each other,” Dengerud says.

which it opened in six cities, including Miami, last year. The labs use technology to reduce unpredictability and bring together different 2-D plans into a 3-D model. “We build it with pixels first,” says Joe Fernandez, Suffolk’s Miamibased vice president of operations.

Looking at a job in 3-D can save millions of dollars and weeks of time. One of the jobs Suffolk piloted in the Miami Smart Lab was Jade Signature, a 53-story building in Sunny Isles. After bringing together the various plans for the building and creating a 3-D rendering, Suffolk discovered a cooling tower would cause it to be higher than the Federal Aviation Administration’s limit. The 3-D model helped engineers find a solution: It enabled them to see that beams in a lower floor had extra air space, and the combination of lowering the beams and changing to a lower-profile cooling tower saved the day.

Smart Lab’s Virtual Reality CAVE allows visitors to walk through several hotel rooms, changing furniture and design choices, checking out the view from different rooms and getting a feel for how a guest might move through a room.

Another important component of the Smart Lab system is software that links a variety of cost and schedule management systems with other data to track in real time. The software monitors safety, coordinates multiple companies’ work and helps Suffolk predict and better handle logistics, such as how to feed 2,000 construction workers every day. Clients can see all of the same data on their own computers, at any time.

Working at Miami Beach hotels during college, Juan Carlos Abello saw how time-consuming it can be to address guest requests to fix a toilet or other issues, requiring information- sharing across departments and shifts. After a stint at a tech company and earning his MBA, Abello developed software that tracks, routes requests for and reports on everything from maintenance needs and housekeeping instructions to guest requests and hotel lost and found. He launched Miamibased Nuvola in 2012, selling it doorto- door to area hotels. Today, newer versions are in use in 19 countries. A digital key allows guests to open their doors with their phones. Nuvola also offers an app for guests, branded under the hotel’s name. The company is working with more than 400 hotels worldwide.