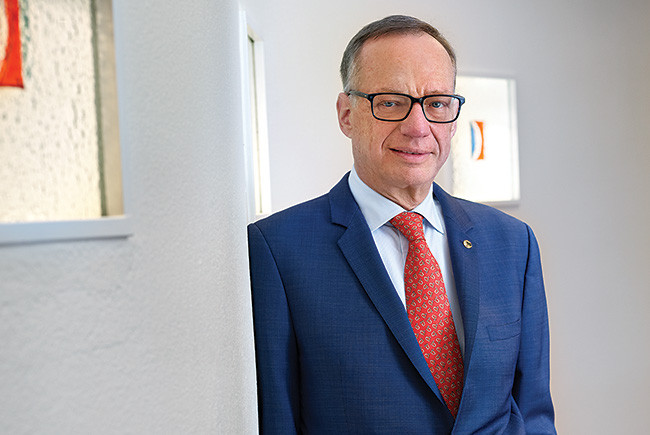 In 1972, Ted Arison launched Carnival Cruise Line with a single, used ship that ran aground off the coast of Miami on its maiden voyage. After that rough start, he found success marketing all-inclusive cruise vacations to middle-class passengers, eventually turning over the reins to his son, Micky Arison, who took Carnival Corp. public in 1987.

By the early 1990s, Carnival was operating four ships in the Caribbean when Giora Israel, then general manager of a beach resort in the Bahamas, joined the company to help it expand to Europe.

“Although I was born in Israel, I’m a German citizen, and I had worked in Europe. I understood Europe,” he says. “My first foreign trip for Carni-val was to Paris. We tried to create a joint venture with ClubMed, but it didn’t work out.”

Carnival ultimately built its business in Europe by buying European cruise lines, including the United Kingdom’s Cunard, Germany’s AIDA Cruises and Italy’s Costa Cruises. The company is now truly global, with 10 brands sailing to more than 700 ports in nearly 140 countries and territories.

Since 2008, Israel has overseen Carnival’s efforts to create destination ports such as Amber Cove in the Dominican Republic, a company-owned port “village” operated exclusively for Carnival brands and their ships. Over the years, Carnival has invested more than $1 billion in about 40 port projects worldwide. “We started very small, but today we are the largest port developer in the world,” he says.

Israel keeps a sign in his office reminding him that developing ports is a means to an end rather than a primary task. The sign reads: “Giora, if you end up building, financing, designing and operating a port, you failed” — meaning he’d rather have local governments develop the infrastructure.

“It’s to remind myself that our objective really is to build new ships, fill those ships and make money,” he says.

Family: He met his wife, Stacy, while working at Outback and has a young daughter as well as an adult son.

In 1988, four entrepreneurs launched a casual, Australian-themed restaurant chain called Outback Steakhouse. The first location was in a Tampa strip mall. A month before the restaurant opened, Rich Menendez, then a student at the University of South Florida, drove by and decided to apply for a job, becoming the company’s seventh hire.

Initially, he didn’t get the sense it would amount to much, he says. “It seemed like it was going to stay small.” Menendez worked briefly as a waiter and did “extra things” as needed. Several months later, he took over the job of a bartender who quit. “They asked me if I knew how to bartend, and I basically lied,” he says. “I said, ‘Oh, yeah, sure,’ and I just learned on the fly.”

To make things look busier than they actually were, the founders had Menendez and other employees eat dinner near a front window in hopes of attracting customers. Menendez resolved to quit if business didn’t pick up. At one point, he gave himself three more days, and on what was to be his second-to-last day, business took off. “I thought, ‘I’ll definitely stay,’ and I guess it was a good choice,” he says.

Outback went public in 1991, then private in 2007 and public again in 2012. During the initial public offering, the founders gave Menendez company shares, which he eventually sold to buy a house.

Menendez, who finished his bachelor’s degree while working at Outback, says he didn’t have any set career plans. “I thought I might teach,” he says. “I just fell into this. I’m like the mayor because I’ve been here so long. I know everybody.”

Family: Her longtime husband, Gene Williams, who worked at Piper for 35 years, died in 2017. Williams has two adult sons and eight grandchildren.

In the early 1960s, Piper Aircraft began producing single-engine Cherokee planes at a new factory in Vero Beach. By the end of the decade, about 7,000 Cherokees a year were rolling off the assembly lines.

In 1974, Peggy Williams, a transplant from West Virginia, got hired at the plant, making horizontal stabilizers for the Cherokee. Until then, Williams had worked in restaurants. She spent her first week learning to rivet. “That was very fascinating to me,” she says. “I was a fast learner.”

After several years, Williams moved to the Cherokee assembly line. “To me, that was where the action was,” she says. “Back then, aircraft rolled every 20 to 30 minutes. You had that much time to get your assembly done and over to the next station.”

Today, Williams supervises about 70 employees who make small parts for Piper’s Cherokee and Malibu planes. The company expects to produce 235 planes this year, up from 155 last year. Although production levels are much lower than they were a half-century ago, prices now range from $370,000 for a pilot training plane to $2.9 million for the singleengine Piper M600. (In the 1960s, a Piper plane cost less than $10,000.)

“It’s just an interesting job, period,” Williams says. “You work with your hands all day. You get to see what you’re building, and you get to see that thing fly.”

Vero Beach-based Piper Aircraft was founded in 1927 as Taylor Brothers Aircraft in Rochester, N.Y. In the 1950s, Piper opened an aircraft design facility at the Vero Beach Municipal Airport, later converting it to a manufacturing plant for general aviation planes. The government of Brunei has owned Piper since 2009.