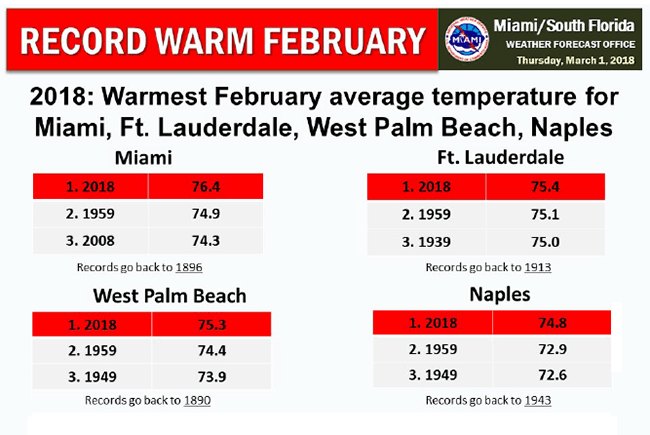 Nearly every major city in Florida has experienced their warmest February on record this past month. Some locations have blown away the old record monthly record by several degrees. February was the warmest on record at all four of South Florida’s official temperature gauges, with Miami and Naples “obliterating” their previous records. See more from the National Weather Service in Miami. Also read more at the Palm Beach Post, the Bradenton Herald, and WKMG.

In Florida, texting and driving still not a primary offense

Will Florida join most of the rest of the country and place an outright ban on texting and driving? Probably not anytime soon. The Florida House overwhelmingly approved a measure Thursday that would make texting behind the wheel a primary offense. But in the Senate, top Republican Sen. Rob Bradley has blocked the bill, citing privacy concerns. [Source: AP]

Recreational fishermen could be granted access to federal waters

Can’t travel to Coachella or Lollapalooza this music festival season? Luckily Florida offers up an array of festivals for rock lovers to rap fans to bassheads. Okeechobee Music and Arts Festival kicks off the festival season on March 1 with big name acts plus yoga, meditation, vegan and vegetarian food and plenty of cool hangout spots. [Source: Orlando Sentinel]

› Opinion: Showcasing Gainesville’s startup community [Gainesville Sun]
As they say, “the only thing constant is change,” and that certainly holds true for the Gainesville region. As a lifelong resident I could give you more examples of that than you would want to hear about, sharing stories of Gainesville and its surrounding town’s evolving progress.

› German 'King of Pop' Michael Wendler plans first U.S. concert in Cape Coral [Naples Daily News]
At home in Cape Coral, Michael Wendler looks like just another German transplant — although one with a sharp sense of style and an Adam Levine haircut. But every once in a while, something happens to show he’s not just any transplant. He’s the "German King of Pop."

› Florida House unanimously passes sexual harassment bill [AP]
Florida officials, government employees and the lobbyists and contractors who deal with them could be subject to new rules and penalties for sexual harassment. See a copy of the bill here.