Divided no more: Regional restaurants branch out across Florida 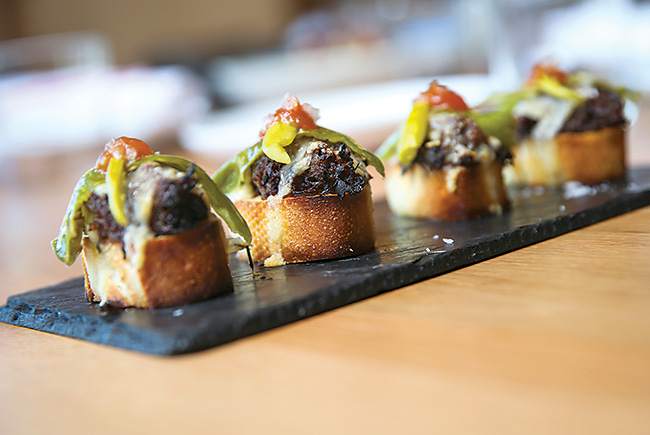 American Social's seafood paella can now be sampled in Tampa.

Put your ear to the table, and you can hear a Florida border crumbling — the one that used to separate east and west coast dining.

Once, chefs and restaurateurs stuck to their respective sides of the peninsula. Gulf-siders roamed up and down I-75, while Oceanics explored the I-95 corridor.

Those who tried to bridge the divide faced challenges in supervision, logistics and marketing — the west offered a quiet, laid-back tone, while the east tended toward loud and flashy.

» American Social Kitchen & Bar, the high-buzz cocktail of flash and comfort food from Fort Lauderdale’s Las Olas, has found a large waterside spot on Tampa’s Harbour Island. The menu features fried chicken BLTs with guac and jalapeno, a whiff of truffles and a parade of well-dressed “social” seekers.

» On its way from West Palm Beach is the raucous Rocco’s Tacos and Tequila Bar from Big Time Restaurant Group. Big Time has a half-dozen restaurants in the Palm Beach area and six Rocco’s from Delray Beach to Brooklyn. This year, it has its first restaurant on the west coast in Tampa’s International Plaza.

» Newer ventures like Tampabased Fresh Kitchen, the healthy and sassy mix-a-bowl meal chain of Ciccio Restaurant Group, have headed east. FK started on Howard Avenue, CRG’s home base, expanded into Sarasota and Orlando and now beyond. “Honestly, at first the East Coast jaunt was anxiety-causing, but our younger guard, Steve Lanza (son of founder Jimmy Lanza) and Ryan Mitchell make it look effortless from here,” says partner Jeff Gigante. The Boca location is a wow, and there’s one in Davie under construction.

» In less than 10 years, Bob Basham and Nick Reader used Outback smarts to turn chicken tenders and nuggets into an empire from North Carolina to Texas. Of 33 Florida PDQs, seven are on the East Coast.

» Likewise, Beef ‘O’ Brady’s, the family-friendly sports bar invented in Brandon more than 30 years ago, has more than 100 locations in the state, including five on the east coast.

» Truluck’s, the upscale seafood and steak house from Austin, Texas, started Florida operations in Naples, where it acquired a stone crab fishery. Truluck’s moved straight across Alligator Alley to Boca, Lauderdale and most recently Brickell in Miami.

» The longest migration so far by a central or north Florida restaurateur has been by the clever crew behind Gainesville’s little Dragonfly sushi bar, who made stunning conquests in Orlando and most recently Doral.

» Winter Park’s 4 Rivers Smokehouse has grown to 14 locations and finally opened in south Florida at Coral Springs in 2016.

» In five years, the Maple Street Biscuit Co. has opened 17 locations from Jacksonville to Tallahassee and Gainesville but none farther south than Oviedo. Instead, they have opened six in Georgia, South Carolina and Tennessee.

» The biggest reach, however, is Firehouse Subs, started by Jacksonville smoke-eaters 20 years ago. Outlets now blanket both coasts and the Panhandle as part of a nationwide total of 1,050 locations.