An ax to grind with state colleges

In the late 1990s, Florida’s political and business leaders grew concerned that four-year baccalaureate degrees were beyond the reach of too many students. Some couldn’t afford the cost of university tuition. Others didn’t live near a campus and couldn’t make a long commute, particularly if they were juggling a job or family or both.

The Legislature turned to the state’s community colleges. In 2001, prompted by Pinellas County legislators unhappy with the University of South Florida’s commitment to students on the west bank of Tampa Bay, lawmakers renamed St. Petersburg Junior College as St. Petersburg College and authorized it to begin offering baccalaureate degrees in a few selected areas. Some other community colleges followed.

Then, between 2006 and 2008, the Legislature passed a series of bills actively encouraging community colleges to add more four-year degrees. That effort was led by former Senate President Ken Pruitt — a Republican from Port St. Lucie and a longtime supporter of Indian River State College. Schools that added bachelor’s programs were allowed to drop the word “community” from their names and become “state colleges” instead. Today, 24 of Florida’s 28 colleges offer one or more baccalaureate degrees; combined, they have roughly 180 four-year programs.

The system seems to be working. Since 2011, the first year the Aspen Institute began awarding the Aspen Prize for Community College Excellence, the Florida College System has produced two winners and six finalists — more than any other community college system in the country.

But one very important person is not happy: State Sen. Joe Negron, a Republican from Stuart who has served in the Legislature since 2000 — with the exception of a three-year stretch from 2006 to 2009, the period when lawmakers decided to push colleges to expand more rapidly.

Since returning to Tallahassee in 2009, Negron has been waging a war to undo many of those changes at Florida colleges, which he says are abandoning their traditional role of providing two-year degrees and industry certifications. He has criticized schools that have changed their names — “if I had my way, I would go back to them being community colleges,” he once said — and at one point attempted to take several million dollars away from the Florida College System and give the money instead to the University of Florida and Florida State University.

In November, Negron took over as Senate president and was able to muscle through a $30-million, system-wide budget cut — a recurring reduction that will cost individual colleges anywhere from $190,000 to $4.6 million a year in lost revenue.

Negron also cut a deal with House Speaker Richard Corcoran to impose policy changes on the college system, including limits on its ability to award bachelor’s degrees and an oversight board that reinserted the word “community” in front of college. Gov. Rick Scott vetoed the changes. But Negron, who has one more year remaining as Senate president, could push them again in 2018.

Negron, 55, says his concerns are philosophical: As colleges have expanded beyond their traditional roles, they have, he says, duplicated — and undercut — programs already offered by universities.

But people throughout the college and university systems in Florida say Negron’s concerns appear to have their roots in a parochial place: Tension between Indian River State College and Florida Atlantic University in Negron’s Treasure Coast-based district, where IRSC’s footprint has grown dramatically over the past decade — and FAU’s has shrunk.

IRSC, whose main campus is in Fort Pierce and which serves students in Indian River, Martin, Okeechobee and St. Lucie counties, has been among the most ambitious colleges in Florida in terms of adding baccalaureate degrees. It has 17 programs. Some are in obvious areas of needs, such as nursing, public safety and education. But others are in areas more commonly found at universities, such as biology, which the school added in 2011 in part to help support Torrey Pines Institute in St. Lucie, and business administration, launched in 2013. Nearly one in every 10 of the college’s roughly 30,000 students is now enrolled in a bachelor’s program.

As it has expanded, IRSC has become an economic engine for the Treasure Coast. Richard Houghten, founder and CEO of the Torrey Pines Institute for Molecular Studies, says the school’s presence was a principal reason he chose to locate in Port St. Lucie. Over the past four years, the institute says it has brought in 25 Indian River students — all from the college’s biology baccalaureate program — as interns; two biology alums are now among Torrey Pines’ 65 employees. 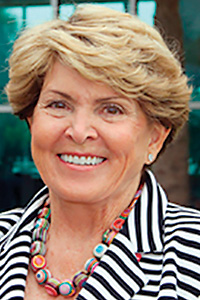 Former FAU board of trustee member Sherry Plymale: State colleges risk de-emphasizing the 2+2 program, which provides more than half of all new enrollees in state universities.

Publicly, representatives for both IRSC and FAU say they have a solid alliance. “Our relationship has never, ever been stronger,” says IRSC President Ed Massey.

Privately, people at both schools acknowledge that IRSC’s growth strained that relationship. “There was always that little bit of animosity in the background,” says a former administrator at one of the schools. “There was tension,” says a current board member from the other school.

In 2012, about five years after Indian River began offering bachelor’s degrees, FAU pulled out of a campus the two had shared in Port St. Lucie, citing dwindling enrollment. FAU, which was dealing with budget cuts at the time, said the decision was primarily a financial one. But Sherry Plymale, a Republican activist on the Treasure Coast who served on FAU’s board of trustees from 2001 to 2013, says IRSC’s move into four-year degrees contributed to FAU’s decision to leave. “That whole beginning of the baccalaureates did nothing to help FAU stay there,” she says.

Plymale, once a top aide to former FAU President Frank Brogan, says she is concerned that as community colleges add more bachelor’s programs, they risk de-emphasizing the state’s 2+2 system. She has spoken about her concerns over the years with Negron. Plymale managed Negron’s campaign when he was first elected to the House in 2000; last year, Negron chose Plymale as one of his nine appointees to the Constitution Revision Commission, which will recommend constitutional amendments for the 2018 ballot. (Among the ideas Plymale says she might pitch: Bringing state colleges under the control of the Board of Governors, which runs the university system.)

But the Senate president also says his views on the Florida College System have not been shaped by any one person or dispute. “Believe it or not, legislators actually have their own ideas,” he says.