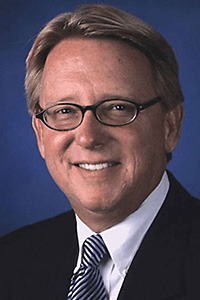 University of North Florida President John Delaney announced his retirement through a staff and student wide email Monday morning to end his 15 years at the university. Delaney plans to start his retirement on May 30, 2018 after his contract ends.

“The UNF Board of Trustees has requested that I extend my contract, but I feel it is time for the campus to look to someone new with fresh perspectives,” Delaney said.

Before coming to UNF, Delaney worked as the mayor of Jacksonville from 1995-2003.

While president, he has contributed to the growth of endowments to $100 million, offered students different options of learning through flagship programs and transformational learning opportunities.

Since his election in 2003, Delaney has increased diversity and the academic standard at UNF. Diversity in the student body is up 63 percent and the incoming freshmen GPA has risen to 4.17 from 3.6 in 2003, according to press release from UNF.

“Our graduation rate has climbed faster than nearly any regional school in the country: and we rank sixth in the country for graduation among urban schools,” Delaney said in the email. “The admission standards are third in the state. The pass rate of licensure exams by our students are the highest in the state, and I include the flagship universities in that list.”

Delaney describes the compassion of the faculty and staff at UNF through an anecdote of his youngest daughter who had to go through multiple surgeries and miss classes because of it.

“She was among the 92 percent of our nursing students who passed the licensing exam last fall,” Delaney said in the email. “That is the highest pass rate in the state, 5 points ahead of UF and even further ahead of other local institutions. There are 130 nursing schools in Florida.”

Delaney will continue working after his retirement. He says that his contract permits him to run a center on UNF campus and is considering entering the private sector or seriously running for Governor in 2018. He has not made it clear which opportunity he will pursue.

The search process for a new president will begin this spring.

Delaney ended his email with a heartfelt statement — “Once an Osprey, always an Osprey.”