For the past five years, Florida TaxWatch has published an annual review that has analyzed the most recent year’s employment figures. As December comes to a close and the New Year is upon us, TaxWatch looks to assess how our job market fared in 2015.

Since the Economic Commentary analysis of Florida’s job market published in January 2011, Florida has added nearly 975,000 nonfarm jobs.1 There has also been a consistent and positive trend for job growth over that time span. In the past year alone, Florida has added approximately 240,000 nonfarm jobs, a sign that Florida’s economy is still on the rise going in to 2016.2

NONFARM JOBS CREATED OVER THE PAST YEAR

The increase in the workforce for all nongovernment industries is evidence that Florida’s private sector economy had a strong showing over the past year. While there was a reduction in the government workforce over the past year, it is consistent with the FY2015-16 budget passed by the Florida Legislature, and the reduction may continue moving forward, as the Governor’s proposed budget for 2016 plans to eliminate an additional 1,000 state government jobs.3 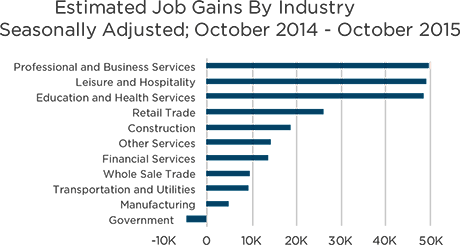 LARGEST GAINS OVER THE PAST YEAR

The strongest sectors for employment growth in the past year were Professional and Business Services, Leisure and Hospitality, and Education and Health Services.

While Professional and Business Services and Leisure and Hospitality have seen comparable gains in recent years, the increase in Education and Health Services was significantly larger than in past years. Florida’s focus on providing quality health care has created a high demand for jobs within the health care field. In fact, the Florida Department of Economic Opportunity named health care employment as a high demand sector in its 2014-2015 Statewide Demand Occupation list.5 The legislature has also shown a commitment to investing in Florida’s future by raising the amount spent on education, something that should continue based on the proposed 2016 budget.6

The increase in employment for Professional and Business Services was aided by the growth in its subset Scientific and Technical Services, which saw an increase of more than 20,000 jobs from October 2014 through October 2015. While the growth in Scientific and Technical Services, which includes fields like engineering, computer systems design, scientific research, and more, was significant over the past year, this field has been one of the most consistent in terms of job growth in recent year. This is likely due to advancements in technology as well as an emphasis on STEM education.

Leisure and Hospitality also saw significant job growth over the past year. While the growth was on pace with job growth in this sector in recent years, it is a strong sign of the continued strength of Florida’s tourism industry. Currently, Florida is one of the most popular tourist destinations in the world, and with increased tourism comes job creation for the state. For example, for every $1 million spent by tourists in Florida, roughly 10.5 jobs are created.7

Over the past year, Florida has seen significant job growth in all major private sector industries in Florida. This has led an unemployment rate of 5.0% (matching the national rate), the lowest since January of 2008.9

Florida’s economy and job market have grown at a strong and consistent rate in recent years, leaning on strengths like Leisure and Hospitality, while also expanding in the high skilled areas of Scientific and Technical services.

Moving forward, Florida can expect to see consistent growth in 2016, comparable to that seen over the past few years. Florida’s economy benefits from a favorable tax environment and a diverse economy which allows businesses from all industries to grow and prosper. Given the current state of Florida’s job market and economy, as well as the consistent growth observed in recent years, Floridians have a lot to be optimistic about heading into the New Year.

Michelle A. Robinson, Chairman of the Board of Trustees, Florida TaxWatch
Senator George LeMieux, Advisory Board Chairman, Center for Competitive Florida