Florida continues to be a top national job creator

Florida has been one of the nation’s leading states for job creation over the past several years, successfully bringing its economy back from the depths of the Great Recession. At this time last year, Florida had created more net new (non-farm) jobs than any state in the union1, and the state has continued to follow this sunny path. In the past 12 months, the Sunshine State has experienced a 3.4 percent increase in non-farm employment with positive gains month-to-month, and has seen a steady drop in its unemployment rate. In addition, Florida is expected to be among the leading job creators in the nation over the next few years, as it is home to six of the top ten metro areas with the highest forecasted employment growth.2 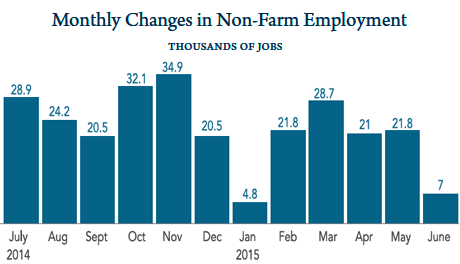 All Florida major non-farm industries experienced gains from June 2014 to June 2015, except for Information, which saw a loss of less than a thousand jobs. The largest gains were in Leisure and Hospitality, with 53,600 new jobs, followed by Education and Health Services, with 53,300 jobs. By percentage, the largest gains were experienced in Construction, with a 6.4 percent growth, followed by Leisure and Hospitality at 4.9 percent, and Education and Health Services at 4.6 percent growth.

» NEXT PAGE: Which urban areas in Florida have the most job growth

While all of Florida’s metropolitan areas showed positive gains, the U.S. Bureau of Labor Statistics highlights two Florida metropolitan areas as having significant gains in non-farm employment in the last 12 months (see table on next page). Among metropolitan areas with a 2010 Census population of 1 million or more, the Orlando-Kissimmee-Sanford area experienced the third largest over-the-year percentage increase in employment at 4.3 percent.3

Of all metropolitan areas, the Sebring area had the second-largest year-to-year percentage gain in the nation at 6.1 percent, trailing only Provo-Orem, Utah at 6.9 percent. The Naples-Immokalee-Marco Island and Ocala areas also experienced large job gains by percentage, at 4.8 and 3.6 percent, respectively.

Halfway through 2015, non-farm job growth in Florida is healthy and broad-based. The past year has seen wide variation in job creation by month, but has consistently maintained positive job creation numbers throughout. Significant gains in the Leisure and Hospitality, Education and Health Services, Retail Trade, and Professional and Business Services industries led the state, while the Information industry showed the only loss (although a comparatively small loss of 900 jobs).

These figures show that Florida is continuing its successful recovery from the Great Recession, building its economy in a variety of important industries, but not at a pace that would significantly increase employment costs overall and, in turn, increase costs to consumers. Continuing on this path will position Florida to lead the way in sustainable economic growth through 2015.