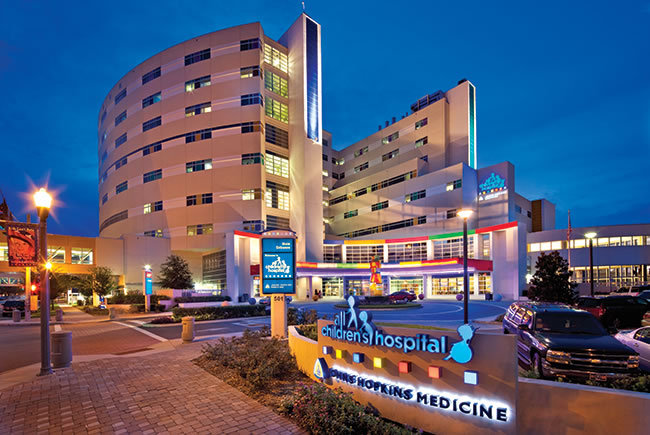 In April 2011, All Children’s officially became part of the Johns Hopkins Health System, one of the most prestigious names in medicine. In exchange for its brand and management expertise, Johns Hopkins got ownership of All Children’s and about $895 million in assets, including a new 259-bed hospital and power plant valued at $462 million, while also acquiring a revenue stream amounting to about $100 million quarterly. No money changed hands in the deal, Johns Hopkins’ first acquisition outside the Washington D.C.-Baltimore area.

Under the deal, the hospital’s staff remained intact, and community leaders in St. Petersburg maintained a majority of All Children’s governing board. Donations made to the hospital’s foundation also remain in local control.

Two and a half years later, the fruits of the “integration” — a term that both parties prefer over acquisition — are beginning to take shape.

All Children’s is well into its first recruitment season for a new pediatric residency program. The two campuses share infrastructure related to institutional review board procedures and clinical research, and studies are under way looking at everything from childhood obesity to pediatric strokes.

The hospital also has begun building a state-of-the-art repository for clinical and biological specimens — a broader pediatric version of Moffitt’s M2Gen project — that Ellen says will facilitate research and aid in the recruitment of top-notch physician-researchers.

There’s more growth on the horizon. Through a recent land swap deal with St. Petersburg, All Children’s has acquired a 1.5-acre plot nearby, which All Children’s executives say they will eventually develop to expand patient care, education, research and advocacy programs.

Dr. Neil Goldenberg, who is building the Clinical and Translational Research Organization at All Children’s, says collaboration between the Baltimore and St. Petersburg campuses will give research efforts a large enough group of patients to produce more statistically robust results — without having to replicate a smaller study’s findings with a second effort.

Goldenberg and his colleagues, for example, recently launched a study of deep vein thrombosis — extensive blood clotting — that began with a 15-year-old Tarpon Springs girl treated at All Children’s for a clot that extended from her ankle to above her kidneys. The study will track how she and other children with the same condition respond to treatment and attempt to identify the factors that produce better outcomes.

Investigators are also looking at a variety of other diseases and childhood health conditions, including more common ailments, such as appendicitis, which can be difficult to diagnose because children have trouble identifying where their pain originates, says Goldenberg. “We hope that we’ll be able to discover some new markers in the blood or perhaps in other body fluids” that lead to earlier diagnosis.

To help facilitate bi-campus research collaborations, All Children’s has integrated its Institutional Review Board, which provides oversight of all research involving human subjects, into Johns Hopkins’ review board system. The move essentially allows for simultaneous approval of a study on both campuses.

The hospital’s research and grants administration has also been integrated into Hopkins’ Office of Research Administration and study coordinators, once scattered throughout the hospital, have been brought under one roof, where they’re receiving standardized training and ongoing professional development.

The newly created Clinical and Translational Research Organization has also employed in-house teams of experts to help clinician researchers with everything from study design and analysis — which includes epidemiological and biostatistical support — to data collection and database design.

Other personnel, meanwhile, have been hired to operate the new biorepository, which contains specialized equipment designed for storing and processing biospecimens and extracting DNA and RNA.

Meanwhile, other hospital leaders are focused on the launch next year of a pediatric residency program that they say will be unlike any other in the country. The program, which creates up to 12 new slots, also aims to help ease Florida’s shortage of primary and specialty pediatric physicians.

The American Council for Graduate Medical Education has recognized that many residency programs don’t address major elements in how medicine is evolving — the Affordable Care Act, cultural competency, continuous quality improvement and safety, and changes in the business of medicine, says Dr. Chad Brands, director of the Office of Medical Education at All Children’s Johns Hopkins Medicine.

Brands and Dr. Raquel Hernandez, associate director of the Office of Medical Education, are designing a program that will incorporate those kinds of subject areas, including genomics, which have created new hurdles for physicians. Today, whole genome and exome sequencing of a patient’s DNA is readily available for between $5,000 and $10,000, but integrating that information into clinical practice effectively is a challenge.

“Any patient can have their data available and used for a variety of different reasons,” says Hernandez. “The communication behind that, the ethics behind that data, how counseling families is relevant in those discussions, needs to be taught.”

While residents often serve as work horses in many teaching hospitals, All Children’s Johns Hopkins says it wants to focus its residents more on learning than just providing care. “Since we have 300-plus admitting privilege physicians, we don’t need residents just to provide services,” says Brands.

The University of South Florida, meanwhile, will continue to operate its own, separate pediatric residency program at the hospital.

Ellen says all the pieces are in place for the hospital to become a top five children’s institution. “We advocate on behalf of children; we provide the greatest clinical care; we’re going to have the best training program for residents; and we’re going to discover new ways to deliver care and new cures for different ailments.” That, he says, “makes for a particular unique kind of children’s hospital that can then become a leader, rather than just a place where you can get care for your child.”