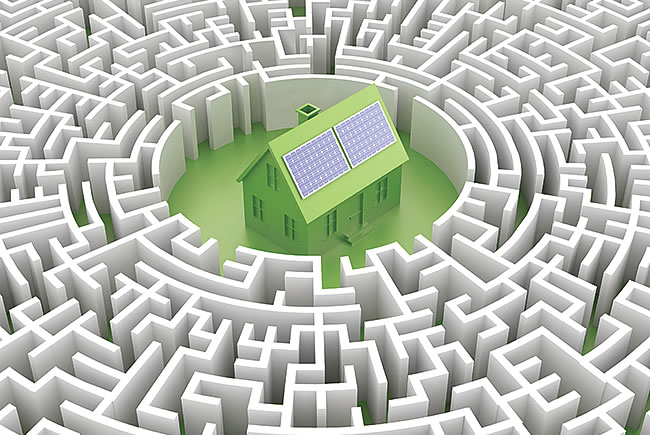 In the final hours of the 2010 Florida legislative session, with the finish line in sight, legislators exchanged celebratory hugs, shook hands and snapped photos. But there was one more bill to consider.

House Speaker Larry Cretul called up House Bill 7179, a non-controversial measure championed by then-House Majority Leader Adam Hasner, a Republican from Delray Beach, and Sen. Mike Bennett, a Republican from Bradenton. The Senate had approved it earlier that day.

The bill, supported by a consortium of building contractors, the renewable energy industry and cities and counties, created a funding mechanism for property owners who want to make their homes and businesses more energy-efficient and wind-resistant.

Surveys of executives and facilities managers by the Institute for Building Efficiency indicate that lack of capital is the No. 1 obstacle to such upgrades. Retrofitting a home or business with a photovoltaic roof, for instance, costs $30,000 or more before incentives. Most solar rebates don’t cover the entire cost, and tax credits come months later. “People want to go green in today’s market, but not everyone has the extra $30,000 or $50,000 to do it,” says Kent Crook, owner of Mr. Solar, a solar energy installation business [“Mr. Solar”].

The PACE financing approach, pioneered in Berkeley, Calif., spreads the upfront costs of energy-efficiency improvements costs over many years — and attaches the debt to the home itself rather than the homeowner.

Here’s how it works: City and county governments that want to participate in PACE create a special taxing district, which operates the PACE program. The program loans money to property owners who want to make energy-related or storm-hardening improvements, including solar water heaters, insulation, impact-resistant windows or photovoltaic solar roofs.

The program is designed to appeal to both local governments and consumers. If the local governments hire an outside firm to find funding sources and administer the loans, for example, they can avoid almost all the startup costs associated with a new program. Meanwhile, property owners who finance through PACE typically don’t have to put any money down, face fewer underwriting requirements than a mortgage loan and can repay the money over up to 20 years at interest rates between 5% and 8%.

There’s another benefit for property owners: They repay the loans through an annual assessment on their property taxes. If the borrower later sells the home, the debt remains attached to the home rather than following the borrower.

When the Legislature passed the Florida PACE law, it looked like Florida was at the tip of a promising trend. Sonoma County, north of San Francisco, had started a program just a year earlier and had enrolled 1,000 homeowners who borrowed a total of $30 million.

Working with Erin Deady, a municipal law attorney, as its legal adviser, EcoCity Partners focused on helping cities apply for grants to pay for setting up the program. “We were all so excited,” Wallander says. “We thought the sky was the limit.”

Driving the decision by Fannie and Freddie was a key part of the PACE legal structure: In the event of foreclosure, PACE assessments are paid first, ahead of the mortgage loan. The mortgage giants were still picking up the pieces from the housing market collapse and were sensitive to anything that might harm mortgage lenders.

Since Fannie Mae and Freddie Mac back most mortgage loans sold in the U.S., their decision put PACE “on life support,” says Wallander. Across the country, cities and counties put their programs on hold. Even Berkeley, which started PACE, shelved its residential program.

Another factor that slowed PACE in Florida was part of the original 2010 law, which was written to allow cities and counties to form partnerships to administer PACE programs. In 2012, the Legislature changed the law so that third-party administrators could handle the financing and administer the loans.

Today, three years after the Florida law passed, PACE is still more promise than success story. Demand from consumers has been all but non-existent: Only two PACE deals have closed.

The program continues to draw more interest from companies that want to run programs than from consumers wanting to borrow money. Because there is no limit to the number of cities or counties that can sign on with each PACE district, the administrator firms want to sign up as many local governments as they can. “In Florida, these companies are jockeying for a PACE market share,” Wallander says. “There has been intense competition between PACE providers.”

Other programs target both residential and commercial properties. A partnership between Kissimmee and Flagler County created the Florida PACE Funding Agency in June 2011, and a year later that program hired McLean, Va.-based SAIC Energy, Environment and Infrastructure to run it. SAIC opened a district office in Orlando. “We are paying a significant amount upfront to develop the program,” says Jonathan Schaefer, the SAIC program manager. “It’s not an easy thing to do.”

Meanwhile, Cutler Bay, an early pioneer in exploring PACE, and six other cities have formed the special taxing district of the Clean Energy Green Corridor. These cities hired Santa Rosa, Calif.-based Ygrene Energy Fund as their program administrator and opened for business in July, with a formal ribbon-cutting ceremony in September.

The PACE administrators say they feel comfortable moving ahead because Florida’s PACE law requires notification of the mortgage lender, but not consent. There’s still the issue, however, involving the sale of homes that carry PACE loan debt — what if a buyer, or the buyer’s mortgage lender, says no to assuming the PACE debt? In that event, the seller and buyer can work out an agreement to pay off the assessment, says Joseph Spector, vice president of operations for Ygrene Energy Fund Florida. Prepayment is allowed.

“We make sure we give full disclosure to all property owners before getting into this financing,” he says. “The first document we give you explains the Fannie Mae and Freddie Mac situation.”

Administrator firms also have faced other problems — some say it has been tough to secure financing. It’s also been difficult to overcome some homeowners’ resistance to having a tax assessment attached to their property.

To market the programs, the districts are relying on contractors to spread the word, plus direct mail and advertisements. “I have found the contractors get it pretty quickly,” Schaefer says. “They don’t really care about the details.”

So far, however, consumers have been slow to warm to PACE. This summer, the Ygrene Energy Fund closed the first PACE deal in the state, involving a commercial property owned by urban development company Barlington Group, which spent $60,000 on impact-resistant glass and energy-efficient storefronts, windows and doors. The company didn’t return a call seeking comment.

Ygrene has also finalized the state’s first PACE residential deal. Steven Dan, who owns a home in the town of Pinecrest, used PACE to pay for a new attic insulation called icynene [“The First Homeowner”].

The other two PACE districts have yet to close a deal, however. Wallander, of EcoCity Partners, hopes one deal will close by the end of the year. On a typical $30,000 deal, EcoCity will make about $750.

Meanwhile, the administrator firms continue marketing themselves to municipalities, with barrages of competing claims. The SAIC-run Florida PACE Funding Agency says it is the “only one” offering residential loans, but the Ygrene-run Florida Green Corridor says not only is it working with residential customers, but it also has closed the first residential PACE deal. The Florida PACE Funding Agency issued a news release earlier this year saying it has secured $500 million in financing from Samas Capital but said in an August interview that Samas hasn’t actually raised that $500 million yet.

Ygrene received national media attention from outlets like the New York Times when it announced a financing partnership with Barclays Capital in 2011. Now, Ygrene says the Barclays relationship is over and it is backed instead by “a range of local and international financial partners.”

The PACE providers agree on one thing: Now that PACE deals have started closing, this fall could be a tipping point, the moment the program will either gain momentum and begin helping solve one of the renewable energy industry’s biggest financial challenges — or just become another good idea that didn’t work.