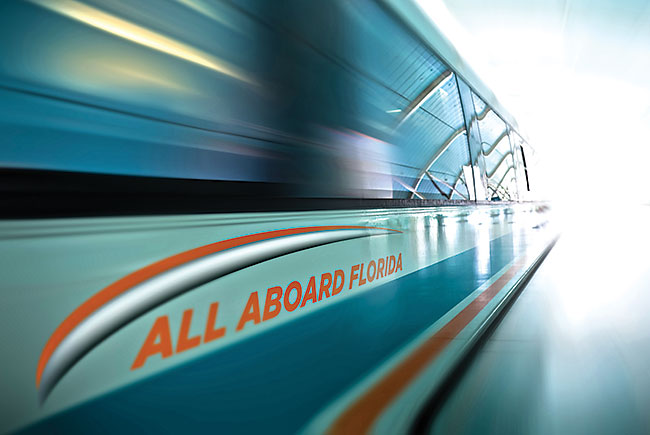 Florida East Coast Industries is one of Florida's ultimate hard assets companies. With roots in the railroad that date back to Henry Flagler in the 1890s, FECI was incorporated in 1983 as a holding company for the railroad and the real estate assets it had acquired over decades — a solid but unglamorous collection of rail yards and industrial sites that were reliable breadwinners but didn't seem to offer the opportunity to make a financial killing.

Interestingly, the freight rail company, Florida East Coast Railway, isn't among FECI's operating units: Fortress made it an independent company that it owns separately, along with the 350 miles of track between Jacksonville and Miami on which the railroad operates its freight trains.

When Fortress decided to separate the freight company from the rest of the business, however, it included a provision that has become the basis for FECI's fourth and most surprising venture: Private passenger rail service.

FECI retained all non-freight rights from Miami to Jacksonville on the railroad right-of-way corridor, including passenger service.

If it comes to fruition, All Aboard Florida will be the first private intercity passenger rail service in America since 1971, when government-subsidized Amtrak took over passenger train operation nationally.

For decades, fast passenger rail has been the stuff of presidential State of the Union wish lists and the dream of those who want to see Americans out of their cars and into mass transit. All Aboard Florida tickles those fancies and stokes the passions of free-market advocates as well. FECI will invest $2 billion in the All Aboard rail system that will be privately owned and running just four years after Gov. Rick Scott was heavily criticized for rejecting federal funding to build high-speed rail between Orlando and Tampa.

All Aboard won't be true high-speed rail — its trains can reach 125 mph only on the short leg from Cocoa to Orlando, where there are no crossings. But it will be fast for a train, covering the 240 miles between south Florida and Orlando International Airport in three hours with stations only in Miami, Fort Lauderdale, West Palm Beach and Orlando.

All Aboard will be fast to the market too — announced in 2012 and running by the end of 2015. "It's the beginning of a revolution in passenger rail," says Bruce Richardson, president of the United Rail Passenger Alliance, a national non-profit based in Jacksonville.

Most people, however, expected that passenger service to be Amtrak and south Florida commuter service Tri-Rail. Both have pined for years to run on the track, which runs down Florida's east coast and, in south Florida, east of I-95. Amtrak now runs on CSX's line, which takes it on a bow through central Florida, while Tri-Rail runs on a line that leaves commuters west of where many work.

Husein Cumber, FECI executive vice president for corporate development, says the entreaties from Tri-Rail and Amtrak focused FECI's leadership on passenger rail, but the company saw pitfalls in government projects. Government subsidies and grants were uncertain, Cumber says, so FECI began wondering how it might deliver passenger rail without relying on handouts from a cash-strapped public sector.

Meanwhile, in 2010 and 2011, with the promise of $2.4 billion in federal stimulus cash to fund it, eight teams of industry players were vying to build high-speed rail between Orlando and Tampa. Cumber says FECI noticed that teams coveted a proposed $8-billion, 10-year project to extend the high-speed rail from Orlando to Miami.

If those companies saw such opportunity, FECI leaders thought FECI should look into it. In 2012, the company launched ridership studies. An initial draft by Morristown, N.J.-based consulting firm Louis Berger Group reported that after a three-year ramp-up to get travelers accustomed to the service, All Aboard would draw 3.29 million riders a year, generating $145 million in revenue, and would grow ridership at 1.3% per year, keeping pace with overall growth in the travel market. More recent estimates put no ceiling on ridership, estimating a market of 50 million trips each year for which All Aboard Florida can compete — trips beginning and ending near a proposed station. About 75% of the train's projected ridership is leisure travelers, with the remaining 25% business travelers.

FECI executives also were encouraged that the Orlando-Miami run could be done in three hours, making it competitive with driving. Signorello says the time to cover the miles is consistent with similar, successful rail passenger operations worldwide. All Aboard is "right in the center of the strike zone," he says.

The last train to try struck out. In 1997, the Florida Fun Train debuted, using the CSX line, as a "theme park on wheels," ferrying people between Osceola County and south Florida. But it was routinely late by hours, as CSX trains took priority on the tracks, and struggled to meet the "inordinate" insurance costs that came with not owning the rail line, says Allen C. Harper, who was chairman of the Fun Train's parent company and who now runs American Heritage Railways, an operator of excursion trains in Colorado and North Carolina.

FECI's control of the rail line will make the difference, Harper says. "It's got so much better chance of working than Florida Fun Train ever did. You're so far ahead of the game capital cost-wise," Harper says. Another factor favoring the train is a decline in airline flights each week from south Florida to Orlando, which fell from 358 in 2001 to 130 in 2011.

All Aboard also should benefit from millions of international tourists who want to visit both south Florida and Orlando. "It's natural for them to say, ‘Oh, is there a train?' " says Richardson. FECI will be helped by the money it can make developing the nine-acre tract in downtown Miami where All Aboard Florida will have its station, and from parcels it purchased in Fort Lauderdale and West Palm Beach where it plans stations. The three sites come to 5 million square feet in entitlements.

Meanwhile, FECI has assembled an executive team for All Aboard, including two former Disney executives, to decide on the design of cars and choose a company to operate the line. It's talked of stylish settings, premium food and beverage service, wi-fi and an hourly schedule during the daytime with no service overnight.

Other developers are salivating at the prospect of intercity passenger rail. MDM Group, for instance, contracted to buy the one-time site of the Miami Arena to build an 1,800-room hotel and convention center that would be connected by bridges to the All Aboard station.

For the train to run by 2015, however, FECI has hurdles to overcome. In June, the Orlando-Orange County Expressway Authority and the state transportation department approved a lease for land along the Beachline Expressway to Cocoa that All Aboard needs to connect to its own track. (The state will take $275,000 a year for its portion; no financial terms have been set with the authority.)

But the authority lease has a long list of conditions All Aboard must meet. Meanwhile, the train's coming has caused planners and interested parties, such as Deseret Ranches of Florida, a major owner of land along the road, to raise concerns about All Aboard's impact and advance their own ideas for use and development.

Cumber says FECI's priority is making All Aboard successful, not moving Amtrak or Tri-Rail to the line. As for other train stops, he says that if at a future date added stops and links — whether Cocoa, Tampa or Jacksonville — show a promise of profit, All Aboard will pursue them, but not now.

Signorello considers his company's other new divisions equally as important as the All Aboard venture, particularly the moving of goods from ports to consumers and to-and-from Latin America, a bread-and-butter supply chain and logistics business called South Florida Logistics Service.

And what FECI hopes to accomplish with all of its divisions — whether moving cargo or moving people — is the same: A hefty return on investment. FECI doesn't disclose its revenue or profit margins, but Signorello says the company's aim always is to at least double its money with each investment. "We like to use that as a floor, not a ceiling," he says.

Like the other three FECI units, All Aboard's final stop could be the selling block. A feature of FECI's structure is that every unit stands independent — even the Miami land where All Aboard will have its station is underwritten as a separate investment — with its own management team and its own capital structure, ready to be spun off cleanly to buyers.

"We're constantly measuring the moment in time when our capital investment should end and someone else's should begin," Signorello says. "We are in the early days for a couple of these projects so we'll continue to invest a lot of capital."