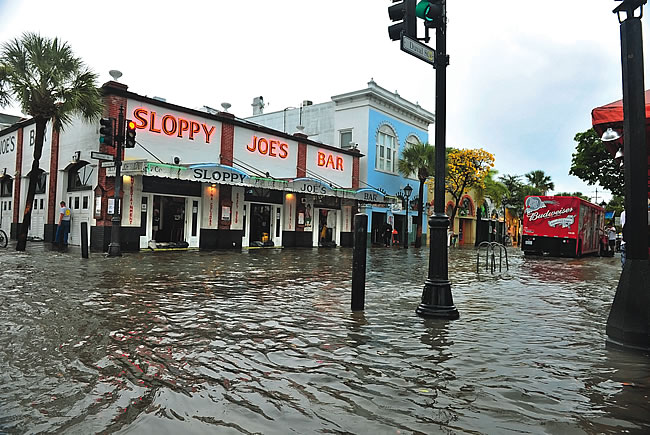 For more than 100 years, scientists at the National Oceanic and Atmospheric Administration have monitored tide gauges placed along Key West’s western shoreline. The precise gauges, among the oldest in the country, indicate that over the last century, the sea has risen by nearly nine inches at Key West.

The effects in the Keys are familiar to residents: Low-lying areas such as the northern part of Duval Street, which once were dry after rainstorms, now flood regularly. Low seawalls are often crested by high tides.

Whether human activity is causing changes in the climate or whether the changes are part of a natural cycle, most scientists believe the oceans will keep swelling — and that the rate of sea level rise will increase.

In Florida, with 8,426 miles of tidal shoreline, the prospect is more than academic. More than 75% of Florida’s population lives in a coastal county.

Estimates vary as to how high the sea will climb in the next 30 years. In Florida, one of the most widely cited estimates of sea level rise is based on a study by the U.S. Army Corps of Engineers and projects three to seven inches by 2030 — 17 years from now.

Governments and planners are beginning to take the sea level rise seriously. The Tampa area, Punta Gorda, Satellite Beach in Brevard County and northeast Florida have all commissioned sea level rise studies. Four south Florida counties, Broward, Miami-Dade, Palm Beach and Monroe, have adopted the Corps’ estimate as part of a “climate change compact” that describes the impact of sea level rise and how they may have to respond.

Even a modest increase has big implications in some places, and the problem of lost shoreline is only the beginning — the most difficult challenges come because sea level rise amplifies many problems that Florida communities already face: Flooding during rainstorms, storm surges from hurricanes and saltwater intrusion into aquifers.

In the stories that follow, Florida Trend looks at the various problems associated with sea level rise, how some communities in Florida are responding and what it costs them.

Florida State University professor emeritus James O’Brien is one of the world’s top experts on oceans. He has a doctorate in meteorology and oceanography, is the emeritus Robert O. Lawton Professor of Meteorology and Oceanography and founded FSU’s Center for Ocean-Atmospheric Prediction Studies.

O’Brien acknowledges that the seas are rising and that climate is changing, but he believes that apocryphal predictions of sea level rise are off base. “It’s just nonsense,” O’Brien says.

O’Brien accepts the data showing seas have risen at a rate of nearly nine inches over the last century in Florida. And he believes that the seas will continue to rise. He just doesn’t think sea level rise will occur at the drastic pace expected by many other climatologists and researchers, who predict seas to rise by as much as six feet by 2100. O’Brien predicts a more moderate 18 inches — still higher than the historical rate of sea level rise in Florida but much less than the other scientists’ estimates.

“The big thing to understand on sea level rise is the globe is coming out of an Ice Age,” O’Brien says. “This sea level in Florida is going to continue to rise, period. Unless we go back into an Ice Age, we will continue to rise at over eight inches in 10 years. That’s without any global warming.” He does believe in global warming, he says, but is skeptical that there is enough data to prove sea level rise will quickly accelerate, especially given that many tide gauges have only been in operation a few decades.

Because O’Brien doesn’t believe seas will rise at the higher rates predicted by some other scientists, he’s unconvinced about efforts to prepare for sea level rise. “Adaptation? We’re already adapting from what we did in the early part of last century,” O’Brien says. “Everything comes down to economics.”

O’Brien believes that businesses will respond to sea level rise if it begins to threaten their profitability and that homeowners will stop buying in places that repeatedly flood without much nudging needed from the government.

If sea level rises three to seven inches by 2030, it won’t mean every oceanfront condominium and home will have water lapping at its doorstep or that all of Key West will disappear. But even a small amount of sea level rise has side effects beyond how much shoreline ends up disappearing:

» Storm surges from a hurricane, for example, that 30 years ago would have been seven feet might be closer to eight feet, sending water farther inland than in the past.

» Both sea level rise and climate changes that produce more rainfall are expected to strain drainage systems. As a result, vital facilities and infrastructure in low-lying areas, such as roads, fire stations, police stations, water utilities and schools, may need to be elevated or relocated.