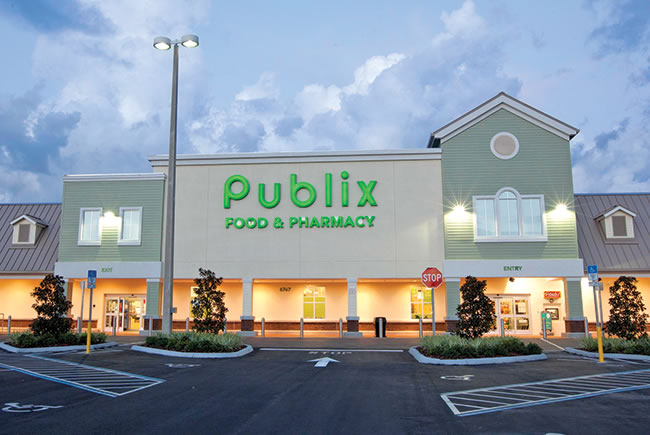 The undisputed leader of grocery sales in Florida is expanding into North Carolina. Publix Super Markets, which already operates stores in Florida, Georgia, South Carolina, Alabama and Tennessee, plans to open its first two stores in the Charlotte area in 2014 as an entry into the Tar Heel State. Meanwhile, in Florida, the 83-year-old grocery chain is aggressively marketing against Walmart with ads questioning Walmart’s claim to the lowest prices. Publix also has been remodeling some stores to target more upscale clientele. A newly remodeled Publix store in Longboat Key, an affluent beach-front community near Sarasota, features a cheese store, a larger wine section, a wider array of prepared, organic and specialty items and outdoor dining areas.

The Cases, who have dealerships in Florida, Ohio and Georgia, already have four dealerships in that corner of Broward County and are accustomed to records. Rick Case says his Honda dealership is the world’s largest and holds the world record for monthly vehicle sales. His Acura dealership also holds that brand’s monthly record. He’s known for giving his home number to customers, for doubling manufacturer warranties, offering free onsite carwashes for the life of the car and other perks. This year, he expects his more than 1,000-employee operation, with the help of that new Volkswagen dealership, to hit $1 billion in sales. He says customers want to move on from their old cars, the economy’s better, employment is up and “there’s financing like never before in my 51 years in the business.”

In 2014, he plans to open the world’s largest Kia dealership in Sunrise. Case, 70, says his mentor, Jim Moran, the late Toyota importer whose JM Family Enterprises (No. 3) is a huge player in the Toyota and Lexus field in the United States, worked until the day he died at 88. Case says he plans to keep working “as long as I can. We’ve got things going on.”

Last October, David Siegel, CEO of Westgate Resorts, fired off a missive to his employees, warning them that he might have to lay them off and downsize the company, or even shut it down, if Barack Obama won re-election. In April, nine months into Obama’s second term, the timeshare company announced it was adding 1,000 employees in its sales and marketing centers as it ramps up its timeshare sales. The industry took a beating during the recession, when sales plummeted, defaults skyrocketed and the credit freeze cut off growth of the capital-intensive business. The economic turmoil also forced Siegel and his wife, Jackie, to halt construction on the 90,000-sq.-ft. mansion modeled on Versailles that they were building in Windermere — a saga captured in the 2012 documentary “Queen of Versailles.”

While Siegel took issue with the film’s depiction of his family life and business and has been battling the filmmaker in court, his timeshare empire appears to be on the rebound. Siegel says the company is operating “at the highest profit levels in the history of the company.” In 2012, he paid off the mortgage and restarted construction of Versailles.

When credit unions were granted the right to begin issuing credit cards in 1977, five Florida credit unions joined together to create a service organization to help them. Today, that organization, St. Petersburg-based PSCU, provides an array of services — including call center support, online and mobile banking support and online bill paying and strategic support — to nearly 700 credit unions around the country. Under the direction of CEO Mike Kelly, who came on board in 2011 after the death of longtime CEO David Serlo, the company has been leveraging technology to help credit unions attract younger clients. Last year, PSCU was able to get six of its credit union members in on a test of Google Wallet, a mobile app that holds a person’s credit or debit card information and allows him to pay in stores with just the tap of his phone at special “contactless” terminals. Now, more than 30 credit unions that partner with PSCU have added their branded payment cards to Google Wallet. Fredda McDonald, PSCU’s executive vice president of credit union experience, says PSCU’s members are among the “early pioneers” of mobile payments. She says she believes it is the wave of the future and will ultimately help credit unions attract more customers of the millennial generation.

Ignacio Urbieta Jr. took charge of the family Urbieta Oil distributor business in 1987 when it had about $4 million in revenue. The company now is up to $504 million. From a plant in Medley, the company supplies gas to more than 85 stations featuring various brands and also to fleets. It’s one of the few E85 distributors in Florida. Urbieta, a University of Miami-educated electrical engineer with an MBA from Florida International University, and the firm have been honored in Poder, Hispanic Business and Entrepreneur magazines. Urbieta’s on the board of UM’s Sylvester Comprehensive Cancer Center.

In 2019, the McGehee family in Jacksonville will mark a century in the paper business, first with a company Clifford Graham McGehee founded (sold in 1965) and then with Mac Papers, which his sons Frank and Tom started in late 1964. With their passing, Frank’s sons Sutton and David and Tom’s son Mac took over running the company, which has 676 employees, 22 offices and 19 retail stores. Its core customers are commercial printers for whom it supplies paper, envelopes, graphic print supplies and other products. Its Mac Papers Envelope Converters employs 230 and has sales of $55 million. As demand for paper has lessened in recent years, Mac Papers has moved into packaging supplies and related products. To that end, in December it announced the purchase of Pembroke Pines-based All Packaging Supplies, a supplier of corrugated cartons and other goods to the industrial and food service market. It earlier had acquired Orlando-based Redd Paper, a paper and packaging company. It’s also expanded with branches in Little Rock, Ark., and Nashville, Tenn. Sutton, David and Mac all entered the family business as teenagers. Mac Papers is active in church and community and donates 10% of pretax profits to charity.

Oddly, Ring Power, the Caterpillar dealer for north and central Florida, got its start in shrimp boats. After World War II, accountant L.C. “Ring” Ringhaver found himself in charge of a shrimp trawler manufacturer in Florida. He thought Caterpillar made the best engines and became the heavy equipment company’s biggest engine customer in the state. When Caterpillar wanted an engine dealer here in the 1960s, it asked Ringhaver.

When the owner of Caterpillar’s north Florida dealership passed away, the company again turned to Ringhaver. His sons, Lance and Randy, took charge of the business with his passing in 1976.

Today, under Randy Ringhaver, Ring Power has its headquarters in St. Augustine, 18 branches in Florida, with regional facilities in Tampa and Orlando, crane and forklift sales and service in Pompano Beach and Miami and eight facilities outside of Florida serving specialized industries and customers.

Bad backs are good business for the Laser Spine Institute, an outpatient facility that offers minimally invasive laser surgery as an alternative to conventional back surgery to correct neck and spine problems. Since opening in 2005, the center has treated more than 30,000 patients, reportedly at $30,000 per procedure, and has opened locations in Scottsdale, Ariz., Philadelphia and Oklahoma City. CEO Bill Horne says he helped build the chain after undergoing an endoscopic surgical procedure in 2004 that relieved 30 years of neck pain. Horne, who had previously served as CEO and chairman of Outback Sports, was so impressed with the outcome of his procedure that he joined his surgeon, James St. Louis, to become his business partner. They launched LSI as an alternative to traditional back and neck surgeries. While the Laser Spine Institute touts a 97% patient satisfaction rate on its website, not everyone is sold on the outpatient clinic’s laser approach. In January, professional wrestler Hulk Hogan, filed a $50-million

lawsuit against LSI, alleging that the multiple procedures surgeons performed on him were “unnecessary and ineffective” and contributed to “significant bone loss and increased spinal instability” that prevented him from working. Hogan’s suit came on the heels of a 2011 article by Bloomberg News that cited more than a dozen other lawsuits against Laser Spine Institute.

Hong Kong natives Tony and Connie Leung met in Canada while in college and started their business there — growing produce for restaurants. In 1980, they came to Florida and found a 160-acre tract in Hillsborough County to grow specialty Asian produce such as Chinese cabbage. They relocated permanently along with their firm, Sanwa (it means “new generation”) Growers.

Leung opened distribution centers in Sanford, Atlanta and Tampa serving restaurants and businesses, and a farmers market that’s open to the public. Sanwa doesn’t do much growing in the fields anymore — no more herbs and vegetables, just palm trees. Tony and Connie are semi-retired from the family-owned business.