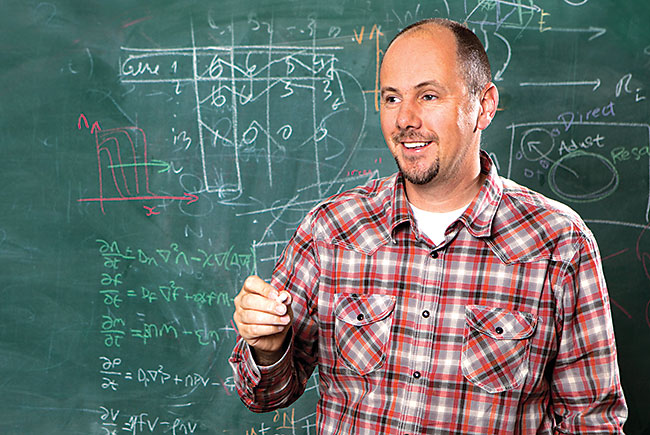 Growing up in Scotland, Alexander "Sandy" Anderson discovered early that he had an aptitude for numbers. He wasn't much interested in abstract math; instead, he focused on "the idea of using mathematics to characterize the real world."

In his academic training, he explored using complex equations to describe processes that seem random but have underlying patterns — for instance, the movements of storms or the flight of birds. Find the formula that describes the pattern, he says, and "you can make predictions" — about a storm's path, for example.

In the early 1990s, Anderson was using mathematics to analyze how microscopic worms called nematodes find food, including

potatoes being grown by farmers. He developed a series of equations that described how fast nematodes moved toward potatoes based on how much of certain chemicals are in the soil.

Anderson believed that the models he built had value beyond helping potato farmers. Cancer tumors, research had shown, also send out certain chemicals that attract blood vessels, which then form around the tumor and feed the cancer's growth. "The way a nematode finds a potato is precisely the way a blood vessel finds a tumor," says Anderson.

Adapting his models to the biological mechanics of cancer, Anderson hoped he could generate new insights into how to disrupt the process by which tumors form and spread.

Anderson began collaborating with researchers at Vanderbilt University and other American medical institutions in formulating mathematical models of cancer's behavior — an endeavor that now has evolved into a discipline called mathematical oncology.

In 2008, Anderson got a call from Dr. Robert Gatenby, an American radiologist and math whiz he'd met on the conference circuit. Moffitt Cancer Center had just hired Gatenby to shore up its radiology department. Gatenby had accepted the job offer on one condition — Moffitt had to let him create a freestanding unit of mathematical oncologists. Gatenby says Anderson was the first person he wanted to hire for what has become Moffitt's Integrated Mathematical Oncology department — the first, and so far, only freestanding mathematical oncology department at a cancer center in the U.S.

Today, a typical workday finds Anderson, Gatenby and other researchers brainstorming in a room they call the "collaboratorium." There are no test tubes or microscopes; the space is filled with comfortable couches, the smell of coffee and a giant chalkboard on which the researchers have scrawled a blizzard of numbers, lines and diagrams that they constantly tweak and reformulate.

The team's goal, in a way, is to mimic in cancer research what hurricane forecasters have accomplished. Meteorologists plug a host of variables — wind speed, water temperature, air temperature, barometric pressures, for example — into formulas that predict how a hurricane will behave. For the oncological math team, the variables may be cell type, the presence of a certain gene, a tumor's rate of growth or some other attribute of a cancer or characteristic of the organ where the cancer is growing. Their quest is to determine which variables, in the right formula, will predict how a given cancer will behave — and ultimately, how to treat it.

One promising area of study for the team involves gliomas, a common form of brain cancer that is uniformly fatal. All gliomas are not created equal, however. Some patients live with low-grade gliomas for decades, while other gliomas become high-grade glioblastomas and kill the patient within in a matter of months.

Traditional methods for predicting how fast a glioma will progress — using data from scans and microscopic examination of blood vessel growth — haven't been very accurate. In collaboration with researchers at the University of Washington in Seattle, Anderson and his colleagues at Moffitt developed mathematical models that incorporated more variables, including cell appearance, for example.

Ultimately, they developed formulas that, in simulations, matched the growth patterns of actual patients' tumors. Anderson says the model may provide a "powerful clinical tool" that will help physicians better predict the likely course of an individual's disease.

The group is also using mathematical modeling to better understand and predict how fast prostate cancer, melanoma, sarcomas, leukemia and other malignancies will spread. In 2011, Anderson and a group of his colleagues landed a $3-million grant from the National Institutes of Health to create mathematical models to predict how aggressively prostate cancer will proceed. "I think it's a really exciting time for the field. I think we're on the cusp of an explosion of this type of research," says Anderson.

In time, Anderson expects to be able to create models that can serve as treatment-planning tools for every cancer. "We want to be taking a patient, get a biopsy from them, get their imaging, get their blood work, get as much information from them as we can" and plug the information into a model that will predict how the tumor will respond to various treatments.

Within a decade, say Anderson and Gatenby, a mathematician will be part of every cancer patient's medical team, participating in clinical decision-making. "The bottom line is, how can we make clinical care better," says Gatenby. "And that's the goal."

Costs and Cases on the Rise

A recent study by researchers at RTI International and the Centers for Disease Control and Prevention predicts that cancer-related medical costs will double in some states in fewer than eight years. By 2020, Florida is forecast to have 353,000 residents undergoing treatment for cancer — the largest projected increase among all states. Florida ranks second for projected costs of treating those patients