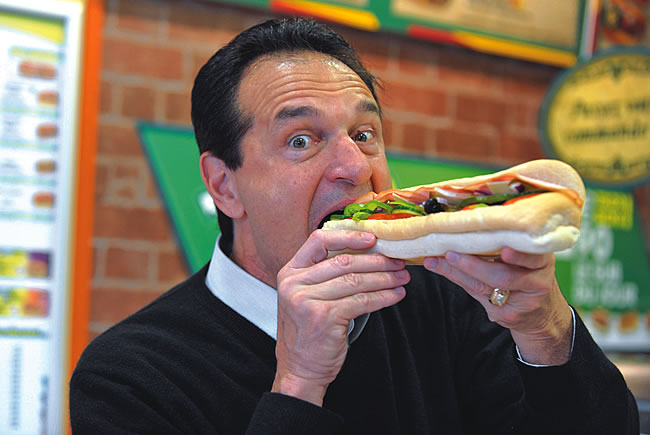 1 Fred DeLuca, 65
$5.4 billion - Fort Lauderdale, Subway
Jared lost the weight, but Fred DeLuca has grown fat on the profits. Subway co-founder DeLuca’s Doctor’s Associates, the Subway franchiser, is based in Miami Springs, but most of Subway’s direct employees are in DeLuca’s home state of Connecticut. His foundation does its giving there. Subway franchisees employ an estimated 15,000 in Florida at nearly 1,500 locations.

Beyond Subway, DeLuca was expected to have his biggest impact on Florida in the hinterlands. He teamed with Palm Beach County developer Anthony Pugliese III to develop Destiny, a 41,000-acre development near Yeehaw Junction in Osceola County. Championed by the Clinton Climate Initiative and self-described as “America’s first eco-sustainable city,” Destiny was massive — larger in land area than Miami and Disney. DeLuca invested $111 million, but the project hasn’t taken off. Pugliese was arrested last year on charges that he faked invoices to bilk DeLuca out of $1.2 million.

2 Micky Arison, 63
$5.2 billion - Miami, Carnival
Born in Israel, Arison grew up in the Carnival cruise business founded by his father, Ted, in Florida. Carnival has had its black eyes of late — a capsizing in Italy, an engine fire off Mexico and a slow, stinky tow to Alabama for passengers of the Triumph. But Arison’s cruise colossus has made a substantial impact on Florida ports and employment. It employs 3,000 in Florida. Arison also owns the Miami Heat; son Nick Arison now is CEO. The list of charities that have relied on the Arisons is long.

4 William Koch, 72
$4 billion - Palm Beach, Oxbow Carbon
A western history buff, art aficionado and an America’s Cup winner, Koch didn’t make his mint in Florida but, rare for a relocated billionaire, he put his Oxbow Carbon headquarters here — doubly rare considering it doesn't deal in Florida resources but in things like coal and coke. It employs 250 locally. Wanting a more elite education for his family, among other things, he bankrolled Oxbridge Academy, a private school in West Palm Beach, pledging $50 million and funding scholarships for students who can’t afford it. The $50 million, according to the Chronicle of Philanthropy, was the largest gift to any Florida cause in 2011.

Koch is married to Bridget Rooney, granddaughter of Steelers founder Art Rooney and part of the Rooney family, which has extensive involvement in Palm Beach business and politics. Koch’s political donations are well known, and his philanthropy is widespread. He had Katy Perry sing at his house for his wife’s birthday party.

5 Malcolm Glazer, 84
$3.6 billion - Palm Beach, real estate/sports
Glazer lives across the state from the Tampa Bay home of his Bucs NFL franchise. He also owns the most valuable sports franchise in the world, Manchester United, from which he took $100 million in an IPO last year. A self-made man without a college degree, he made his money in real estate before going into sports, buying the hapless Bucs and building the team into a Super Bowl winner in 2003, the last time a Florida team has won one. His First Allied has 6.7 million square feet of real estate, according to its website. His philanthropy through the Glazer Family Foundation includes the Glazer Children’s Museum in Tampa. A stroke in 2006 left him impaired; his children run his business.

6 Edward Lampert, 50
$3.5 billion - Indian Creek Village, hedge fund
Lampert set a record last year, since broken, for the most expensive home purchase in Miami-Dade, a $38-million home in Indian Creek. The community is gated and has a marine patrol, no doubt a comfort to Lampert, who was kidnapped in 2003 in Connecticut at gunpoint. He escaped after promising to pay his captors, who were caught after they used his credit card to order pizza. Lampert is a major shareholder in Fort Lauderdale-based AutoNation, though he has cut his stake. He bought a sizable chunk of his holdings from fellow billionaire and AutoNation founder H. Wayne Huizenga.

8 Phillip Frost, 76
$2.9 billion - Star Island, pharmaceuticals and health care
The French literature major who went on to medicine and a gold mine in generic pharmaceuticals (Ivax, founded by Frost, sold in 2006 to Teva) remains an investor and builder of Florida companies. His vehicle at present is Opko Health. He and wife, Patricia, are generous donors. The art museum at Florida International University bears their names, as will the new science museum opening in 2015 in Miami, to which he donated $35 million.

10 Jeff Greene, 58
$2.6 billion - Palm Beach, real estate/investments
A summer visitor to Florida as a kid and briefly a Breakers busboy after the family moved to Florida in the 1970s, Jeff Greene didn’t get the Democratic nomination for U.S. Senate in 2010 to go up against eventual winner, Republican Marco Rubio. But the man who made it big betting against subprime mortgages has invested in Florida since relocating from California. Recently, he’s invested in the financially distressed Omphoy Ocean Resort, a 134-room hotel on the barrier island south of the Palm Beach; in bulk buys of 402 condo units in the West Palm Beach area; a Comfort Inn; and a suburban site that has been approved for 548 apartments.

11 Igor Olenicoff, 70
$2.5 billion - Lighthouse Point, Olen Properties
Olenicoff made his fortune in real estate in California, where Olen Properties is based. Olen lists 11 apartment developments in Florida, a couple of commercial properties and the Walkabout Golf & Country Club in Mims. A felon — for filing
a false tax return — he paid $52 million in back taxes, interest and penalties to
make good.

12 H. Wayne Huizenga, 75
$2.4 billion - Fort Lauderdale, company building
Florida’s most successful company builder of the modern era, Huizenga now appears to have reached his personal estate-planning era. He sold the Marlins in 1998, the Florida Panthers in 2001 and hasn’t been a majority owner of the Miami Dolphins since 2008. Never finishing college, he holds the distinction of being the only person to found three Fortune 500 companies — Waste Management, Blockbuster and AutoNation — and have six companies listed on the NYSE. He’s a philanthropist (Nova Southeastern University and the homeless, to name just two causes) and remains an investor. His accolades include being a Horatio Alger winner and Ernst & Young Entrepreneur of the Year winner. The sweet life includes a private 737, formerly owning a personal golf course — the Floridian in Palm City — and golfing with Dan Marino in Ireland.

13 Richard Schulze, 72
$2.4 billion - Bonita Springs, Best Buy
Like a lot of Midwesterners — the Schulze-founded Best Buy is based in Minnesota — Schulze settled on the Gulf Coast. The bulk of his philanthropy, at least publicly, goes to Minnesota. Schulze is trying to regain control of Best Buy.

14 Edward DeBartolo Jr., 66
$2.3 billion - Tampa, real estate
When DeBartolo and his sister divided the family assets, she got the San Francisco 49ers, which won five Super Bowls under him, and he got the real estate. His Florida interests include indirect ownership, through his shares in Simon Property, and directly held real estate through his DeBartolo Holdings. DeBartolo spent plenty of time here before moving to Florida full time in 2000. Former Tampa Mayor Dick Greco worked for DeBartolo between terms. DeBartolo’s family foundation gives more than $500,000 a year to Tampa Bay area non-profits.

16 Robert Rich Jr., 72
$2.1 billion - Islamorada, Rich Products
The leader of the Buffalo, N.Y.-based frozen-food company founded on non-dairy creamer has written books about fishing in Florida. The family-owned company owns the Green Turtle Inn and Kaiyo Grill in Islamorada and Palm Beach National Golf & Country Club in Lake Worth. His philanthropic activity is concentrated in the Buffalo area.

17 Isaac Perlmutter, 70
$2 billion - Palm Beach
Along with selling Marvel to Disney and becoming a major Disney shareholder, his lifetime credits include the boast of never having given an interview and unflattering reports of brutish management actions. He's so rarely photographed that all articles of him tend to have the same shot.

18 Wilbur Ross Jr., 75
$2 billion - Palm Beach, investments
Though he made his name and money in Rust Belt industries, Ross has been an active investor in Florida. He’s one of the group that acquired failed BankUnited. He bought into Ponte Vedra-based Capital Markets Cooperative and was a member of a syndicate that bought commercial mortgages backed, for the most part, by condos heavily concentrated in south Florida.

21 Norman Braman, 80
$1.6 billion - Indian Creek Village, auto dealerships
Norman Braman is best known for his car dealerships and former ownership of the Philadelphia Eagles. Many Miami politicos know him as a thorn in their side. Braman led the fight against using tax money to build the new Marlins stadium and to get Miami-Dade Mayor Carlos Alvarez recalled. He now fights an effort to get taxpayer support for a Dolphins stadium renovation.

23 Christopher Cline, 55
$1.5 billion - North Palm Beach, coal
Coal mogul Christopher Cline’s office says he doesn’t give interviews. But he gave one to Bloomberg Markets Magazine in 2010, saying it was time to speak out on behalf of coal. Since then, Cline has been fodder for the gossip columns: Friendship with Tiger Woods’ ex, Elin Nordegren, and his stepping out with a former Miss Florida. His yacht, Mine Games, hosted “booze-fueled parties” that “quickly became a preferred hangout for young Palm Beach society,” blogger Jose Lambiet has written. Cline hosted a Florida fundraiser for Mitt Romney.

24 Tom Golisano, 71
$1.4 billion - Naples, Paychex
The Paychex founder moved from New York in 2009. He wrote: “I’m leaving. And by domiciling in Florida, I will personally save $13,800 every single day. That’s a pretty strong incentive.” The money he saves he’s donating — and then some. And unlike some billionaires who relocate here, his checkbook has been open for local causes: $4 million for the Tom Golisano Field House at Ave Maria University; $5 million to the Golisano Children’s Museum of Naples; and $20 million to build a Golisano Children’s Hospital of Southwest Florida.