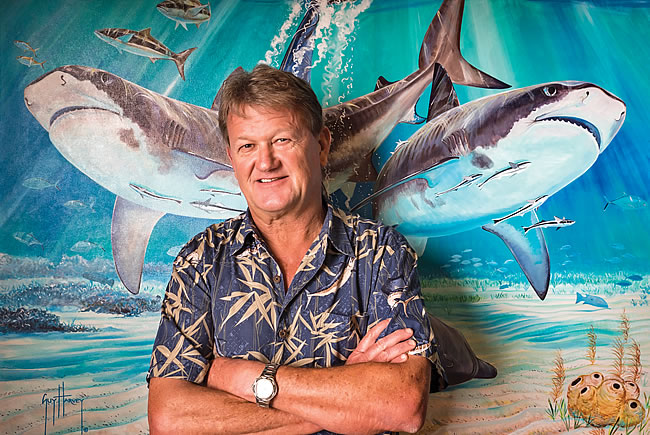 An 11th-generation Jamaican, Harvey, 57, didn’t set out to become an entrepreneur, or even a painter. After getting a degree in marine biology from Aberdeen University in Scotland and a Ph.D. in fisheries management from the University of the West Indies, he took a job teaching marine biology at the latter school in the early 1980s.

Interested in drawing as a child, Harvey began painting fish in his spare time. A friend convinced Harvey his work had commercial potential, and Harvey started selling his paintings at art shows. His first big break came at the 1986 Fort Lauderdale International Boat Show. He sold everything he brought, including watercolors, pen and ink drawings and a set of 12 drawings depicting Ernest Hemingway’s “Old Man and the Sea” story that brought him $1,200. (Today, those paintings are worth $24,000.)

By 1988, he had quit his job as a professor and was painting full time. He began licensing his work, partnering with a company called T-Shirts of Florida that put his designs on cotton T-shirts. Harvey says he was “a little bit skeptical, to be honest,” but liked that the art reproduced properly on the shirts. “It makes it look exactly like a real painting.”

Initially, Harvey’s art caught on with anglers, who appreciated his efforts to render fish in vivid detail. Apparel sales took off when Harvey’s designs became popular with others, including teenagers and young adults, a notoriously fickle demographic.

“When we first started, if you went to a Guy Harvey signing it was a couple of older guys who fish together who wanted to buy a T-shirt,” says Shedd, who acknowledges he is a little baffled by Harvey’s enduring popularity with young adults.

Harvey paints in a variety of media, including oils, acrylics, watercolors and pen and ink. He paints all the artwork himself, with an assistant helping him adapt the images for use on T-shirts or rugs.

The accuracy of his images is a source of pride: He says he spends time diving and fishing, especially in areas he is unfamiliar with, such as the Pacific Northwest, “to stay on top of the anatomy and the physiology of these animals. I learned scientifically about how to get it right,” Harvey says. “I didn’t work from photos.”

Harvey quickly steers business conversation toward marine conservation. He prefers catch-and-release fishing and will only eat sustainable seafood, he says, handing out a wallet-sized pamphlet listing what’s acceptable. He says he almost single-handedly convinced Cayman Island restaurants to stop offering grouper because they are overfished.

Fourteen years ago, he founded the Guy Harvey Research Institute at Nova Southeastern University at Dania Beach. The institute focuses on scientific research intended to protect marine life from overfishing and habitat loss. The program receives its funding through the Guy Harvey Ocean Foundation, Guy Harvey Inc., licensing fees and grants and donations.

Five years ago, Harvey created the Guy Harvey Ocean Foundation, separate from the institute, to have more control over how money is spent. “We put about 80% into research work and 20% into education,” he says.

Most of the funding for the foundation comes from sources like Guy Harvey lottery tickets and license plates or directly from the licensees, who pay a percentage of gross sales. Harvey won’t reveal that percentage. “It’s single digits. It’s a lot of money — easily six figures,” he says. The foundation’s expenditures last year were $1.5 million, Stock says, and of that $500,000 went to the Guy Harvey Research Institute.

Sustaining the foundation and his business, meanwhile, has meant casting an ever-wider net. There was a Guy Harvey television show. There’s a Guy Harvey magazine. Along with Harvey-branded scratch-off lottery games and Florida license plates, there are plans for two Guy Harvey documentaries that will be available on iTunes.

Most recently, Harvey licensed his name to the TradeWinds Resort in St. Pete Beach, which rebranded one of its resorts as the “Guy Harvey Outpost.” He has had some failures — a chain of seven restaurants called the Guy Harvey Island Grill closed last year.

Nearly 70% of Harvey’s sales come from apparel. Looking for a manufacturer/distributor with national scope, Harvey ended his relationship with T-Shirts of Florida and signed the deal with AFTCO in 2004. Apparel sales increased, but the Harvey brand hasn’t broken through nationally in the same way, for example, as the Tommy Bahama apparel line. Trend contacted two analysts who follow the retail industry. Neither had heard of Harvey.

Harvey is keen to change that. Last year, Guy Harvey Inc. began a campaign to broaden his appeal — starting with a line of collegiate T-shirts for southeastern schools that feature the schools’ mascots rather than fish. The company also has rolled out a line of shirts with images for the Navy, Air Force, Marines and Coast Guard. The shirts don’t feature fish.

Another new line targets women, including a pink, breast cancer-awareness month T-shirt. In the last several years, Stock says, there has been a concerted effort to improve Harvey’s women’s apparel selection, with shirts that offer slogans like “I Fish Like a Girl,” and are sold in smaller women’s cuts and soft pastels.

“We are trying to get bigger than the fishing business,” Harvey says. The collegiate and other lines “are all important for us to build the brand into a meaningful national brand, not just a lifestyle brand.” Success, he adds, means more money for marine conservation.

Stock says the company is also targeting country-music fans. The company plans a “Rock the Ocean” two-day festival on Fort Lauderdale Beach in April with country singer Kenny Chesney headlining. A key part of the company’s marketing is emphasizing that Harvey, unlike the fictional Tommy Bahama, is an actual person — “an artist and a scientist and all these other things (Tommy Bahama) doesn’t have,” Stock says.

Harvey, who travels at least 30 weeks a year to events like the Beall’s appearance in Tallahassee to promote his brand, lives and paints on Grand Cayman Island. Commerce is always close at hand. Harvey’s studio is also a store, and he says he likes to chat with customers as he paints.

“It’s all fun; it’s all part of the game,” he says. “We get a lot of cruise ships coming in. The beauty of that situation is you get a boatload of customers every single day.”

The Life of a Guy

Growing Up: Raised on a 1,200-acre farm in Jamaica, Harvey is the son of a cattle farmer and a nurse. His mother’s side of the family has lived in Jamaica since the 1600s. His family had a beach cottage, and that’s where he first fell in love with the ocean.

Early Art: As a child, Harvey liked drawing. At 8, he was sent to England for boarding school, where he sketched fish he remembered from Jamaica and grew particularly attached to Ernest Hemingway’s “The Old Man and the Sea.” He still has a British accent.

Education: A degree in marine biology at Aberdeen University in Scotland; a Ph.D. in fisheries management from the University of the West Indies in Jamaica

Family: Wife, Gillian, 51, whom he met at a New Year’s Eve party in 1984 and married in 1989. Harvey says she doesn’t like to fish. She works as a consular officer for the Jamaican consulate in the Cayman Islands. The couple’s two children, Alex and Jessica, have worked in the gallery and store in Grand Cayman during holidays. Jessica has a zoology degree and works for the environmental protection department for the Cayman Islands. Alex is a business major — with a talent for drawing.