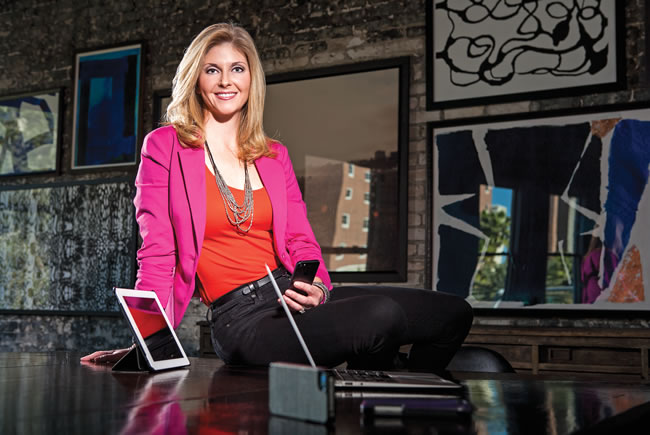 The mobile applications industry is responsible for an estimated 466,000 U.S. jobs and $20 billion in annual revenue. While there’s no way to know exactly how many mobile application developers are in Florida, there are dozens of web development firms in the state with expertise in mobile-friendly websites and applications for both mobile devices and tablets. Some firms work only on a contract basis developing applications on behalf of clients, giving the app developers a more diverse and stable revenue stream. Other entrepreneurs focus on the riskier effort of developing their own proprietary apps.

Though developing an application can be relatively low cost — estimates range from $8,000 to more than $100,000 — it’s much more challenging to monetize that application. Most users aren’t willing to spend much on apps, and mobile advertising hasn’t proved to be lucrative. Chris Cabell, founder of AppWoRx and an expert on monetizing mobile apps, says it doesn’t matter how unique an idea is, but rather how well the developer executes and markets it. “It’s still early in the market,” he says. “It’s not saturated yet.”

As soon as the iPhone hit the market six years ago, retailers took advantage of the phone’s built-in satellite tracking system to develop apps that not only targeted customers based on location but tracked their every move.

Steve MacDonald, along with other executives at his Tampa-based pharmacy benefits company myMatrixx, jumped on the app bandwagon and developed several retailer loyalty apps under the name GeoMOFO that tracked the whereabouts of customers.

Their biggest hit yet may be MamaBear, a smartphone app that allows parents to track their children’s location, driving habits and social media activity. MacDonald used the same framework for the retailer loyalty apps to create MamaBear. Launched in August, MamaBear, still being tested, already has 10,000 downloads. It’s free for now, but the plan is to charge monthly subscriptions between $5 and $10.

Both child and parent must install the app on their phones, says Robyn Spoto, president of Tampa’s MamaBear. From there, parents can set up what they want to know: Where a child has been and whether a child is someplace he isn’t supposed to be. The app even provides social media alerts when certain words are used or a child is tagged in a photo.

“The intent of the app is really to put some knowledge in a parent’s hands so they don’t have to worry so much about what their kids are doing,” Spoto says.

While in Silicon Valley for an internship at a satellite company, University of Florida student Aidan Augustin attended dozens of networking events. But he became frustrated by how cumbersome it was to exchange contact information with new acquaintances. Many, including other interns, didn’t have business cards. “Some people would say ‘find me on Facebook,’ or ‘I’ll send you an email from my phone,’ ” Augustin says. Even if the new contact had a business card, he had to type the information into his phone or computer.

Feathr will launch a limited version this month. It has seven employees and some heavy-hitting advisers, such as Jamie Grooms, head of the Florida Institute for the Commercialization for Public Research.

But Feathr is entering a crowded field; efforts to digitize business cards have been under way for years, and none has become widely used so far.

Augustin says Feathr offers an eye-pleasing interface that doesn’t mimic the look of a traditional business card. And it doesn’t require that both people sharing contact information have the app. Feathr is free to download; the company plans to make money selling sponsored content.

Chris Cabell has found a niche developing mobile applications for physicians and the medical industry under the name AppwoRx. The south Florida resident has built several mobile application platforms that help physicians with medical record keeping and communications with patients.

He has partnered with Ariel Soffer, a Miami cardiologist and head of the Soffer Vein Institute, in developing several mobile app platforms that are sold to physicians and medical groups. He typically charges $499 and a monthly subscription fee. Patients can download and use the app at no cost.

Their biggest products are two app platforms called AppRx and PhotoRx. AppRx has received media attention because it allows physicians to communicate with a patient based on photos sent through a smart phone app. Doctors can also use the PhotoRx app to integrate photos of patients with electronic medical records.

When Florida’s real estate market was in the doldrums, Kristi Taylor, who worked in real estate development in Gainesville, began plotting a plan B in mobile apps.

“I knew mobile apps was the future,” Taylor says. “I jumped ship.”

She started a company called T5 Tech and hired engineers to develop her idea for a website and companion mobile app called MonkeyWish — a universal gift registry that allows users to select items from a retailer’s website and add to their wish list on the MonkeyWish site.

Users can view a list and even scan items onto their phones from stores to add to their wish list.

The app is free. Taylor makes money by partnering with retailers such as Best Buy, Sports Authority and Amazon. If someone makes a purchase from a user’s wish list from one of those stores, MonkeyWish receives a percentage. Registry listers can also post gift items from retailers that MonkeyWish does not partner with.

While there isn’t “significant revenue” yet, Taylor says the app is gaining users rapidly, thanks in part to media exposure. She showcased the app on the “Today Show” in December. After it aired, app downloads increased 1,000%, she says.