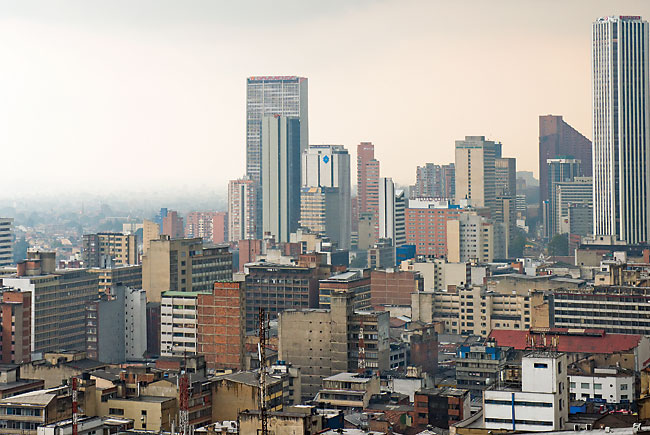 On the 11th floor of a midrise office tower on the north side of Bogotá, Colombia's capital, the 2,400-sq.-ft. offices of law firm Holland & Knight offer a vista that includes the Andes mountains, a dense urban skyline and taxi-clogged roadways.

Half of the offices are empty, but likely not for long. Holland & Knight — one of many Florida companies eyeing opportunities in the country — moved in eight months ago with growth in mind. It plans to expand from six attorneys to 25 in about a year.

A decade ago, many American businesses wouldn't have even thought about opening an office in a country then considered one of the world's most dangerous. In addition to rampant crime, Colombia was mired in a decades-long struggle with a criminal Marxist group known as FARC (Revolutionary Armed Forces of Colombia). Many businesspeople in Bogotá hurried from work to home in armored vehicles, fearful of bombs and kidnapping.

Tourism, such as it was, consisted largely of business travelers or Colombians visiting family, who came and went cautiously. Bob Grammig, a partner with Holland & Knight's Tampa office, says the reception committee for business travelers to Bogotá a decade ago included armored vehicles and bodyguards.

"You would never leave the office of the client without having a bodyguard with you — usually two of them — and a driver," he says. "You couldn't go 10 kilometers outside the city of Bogotá or else you were looking for trouble."

In the past decade, however, a transformation has taken place, thanks to a concerted effort by former Colombian President Alvaro Uribe to crack down on crime. A new war tax, plus billions in aid from the United States, helped fund a stronger military. The 100,000 additional troops wrested control of land from the FARC. Uribe also began working to demobilize right-wing paramilitary groups frequently involved drug trafficking.

Today, Grammig describes Bogotá as a "normal city" where people walk the streets without bodyguards and use public transportation. Hoteliers struggle to keep up with flocks of tourists who now visit the country. Colombians haven't totally dropped their guard ["Doing Business in Colombia," page 68], but kidnappings are rare, and the Colombian government has been holding peace talks — once clandestine, now open — with FARC, whose forces have dwindled to an estimated 8,000.

As social order improved, the country's economy — dominated by coffee, energy and food production — began growing at a heady clip. Colombia's gross domestic product has risen an average of 4.3% a year for the past decade, with a high of 7.7% in December 2006, and the country escaped the global recession more quickly and with less damage than most nations. Colombia has also been attracting capital — average annual foreign investment rose from less than $3 billion in 2005 to $8.4 billion in 2010.

The U.S. Colombia Trade Promotion Agreement, which went into effect in May, is expected to further accelerate growth. The agreement eliminates most tariffs on trade with Colombia and phases out tariffs on some agricultural products, such as corn and dairy. Major beneficiaries are likely to include Colombian agricultural exporters, particularly in dairy and sugar, along with shippers and professional services firms.

It's too early to declare the trade deal a success, says Camilo Reyes, executive director of Bogotá-based Colombian-American Chamber of Commerce. In the three months since the deal was signed, Colombian imports into the United States were up 11%, while American exports into Colombia fell by 1%.

But other indicators bode well. In the first five months of 2012, Florida's trade with Colombia rose 18% over the same period last year.

One area ripe for foreign investment is Colombia's transportation infrastructure. With a revenue surplus in hand, the government may offer incentives to update or build highways, bridges, ports and airports. The old Bogotá airport is being rebuilt — partly redesigned by Miami-based Zyscovich Architects [See Faces of Florida-Colombia Trade: Design].

There's a push to build roads and repair old ones as more Colombians feel safe traveling intercity by car. Reyes says U.S. firms have fallen behind other countries in investing in Colombia's infrastructure. He suspects it might be because road projects in Colombia require investors to build and help manage the roads.

Reyes says other investment opportunities include energy, food products and medical tourism. Colombia's relatively low cost of health care makes it an attractive destination for Americans searching for a lower-cost alternative for treatment.

Demand for hotels has also skyrocketed as tourism has grown. Last year, 1.8 million tourists visited, more than doubling the 732,000 tourists who came in 2000, according to Colombia's Ministry of Commerce, Industry and Tourism. Hilton just opened its first hotel in Bogotá, and other U.S. hotel chains are interested in expanding in Colombia, including Marriott and Intercontinental Hotels Group, which owns Holiday Inn. Colombia's tourism marketing arm, Proexport, even developed a slogan that plays off the country's old reputation: "Colombia. The only risk is wanting to stay."

Among the business travelers this year have been two delegations — one from Miami and the other from Orlando, both including dozens of business- people from their respective regions. This month, Gov. Rick Scott brings a delegation of more than 80 Florida executives to Colombia.

In Orlando, meanwhile, a new Colombian consulate office opened this year, established to help manage the anticipated uptick in tourism and business travel.

Florida is poised to gain more from the free trade agreement than other states, says Florida International University professor Eduardo Gamarra, an expert on Latin America. But he warns against assuming Colombia will always look to Florida as its primary trading partner. The trade agreement, he says, allows Colombian companies to more easily target non-Florida markets.

As both security and business climate in Colombia improve, more entrepreneurial-minded Colombians are feeling comfortable moving back to their homeland.

Gamarra, who is Bolivian, says he and his wife, who is from Colombia, debate every year whether to move back. "I could go back, even though it's not my country," Gamarra says. "They have things you simply cannot get in the United States," he says, such as inexpensive, good medical care. "I could retire there on Social Security very easily."

Enrique Gómez-Pinzón, a partner in Holland & Knight's Bogotá office, moved back this year after a 14-year stint in Washington, D.C. "Nowadays, we can confidently state that the government is in charge," he says. Most remarkable to him is that he can stroll to his office every day without an armored car. "It's just like any other big city," he says.