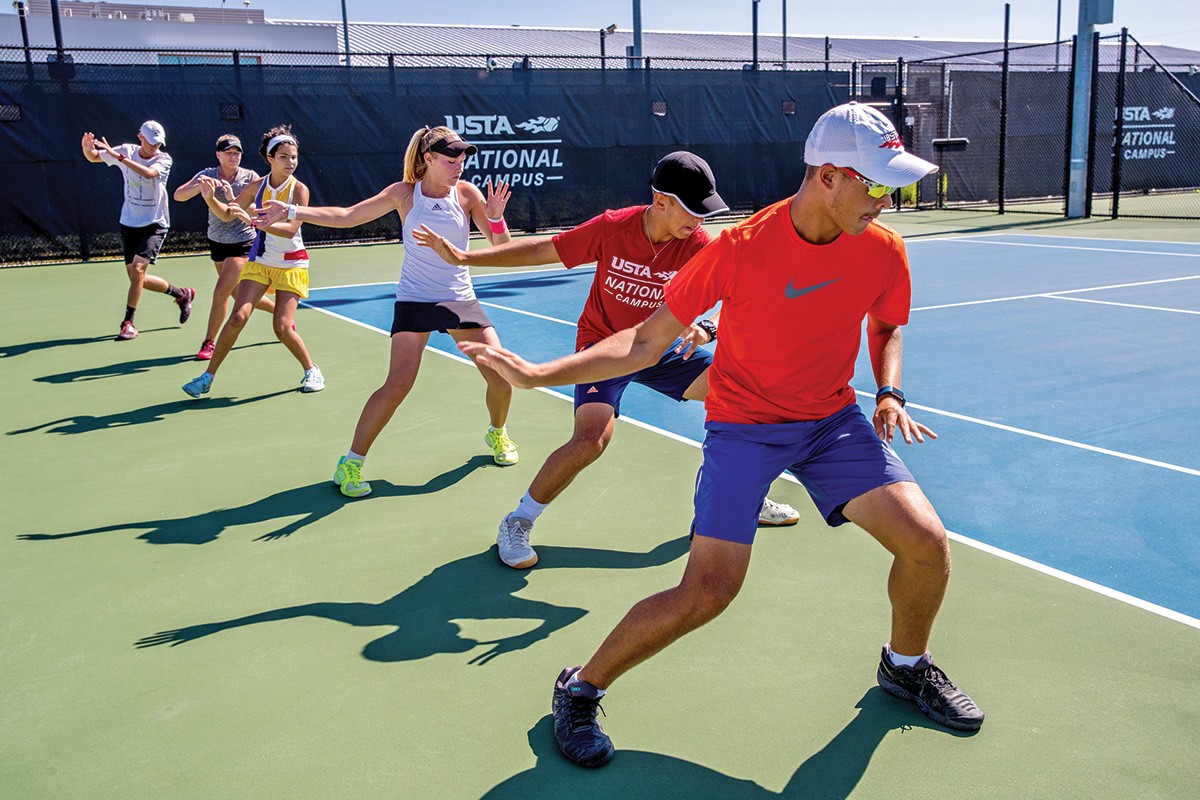 The USTA National Campus in Lake Nona hosts about 9,000 people a week and more than 150 events a year. 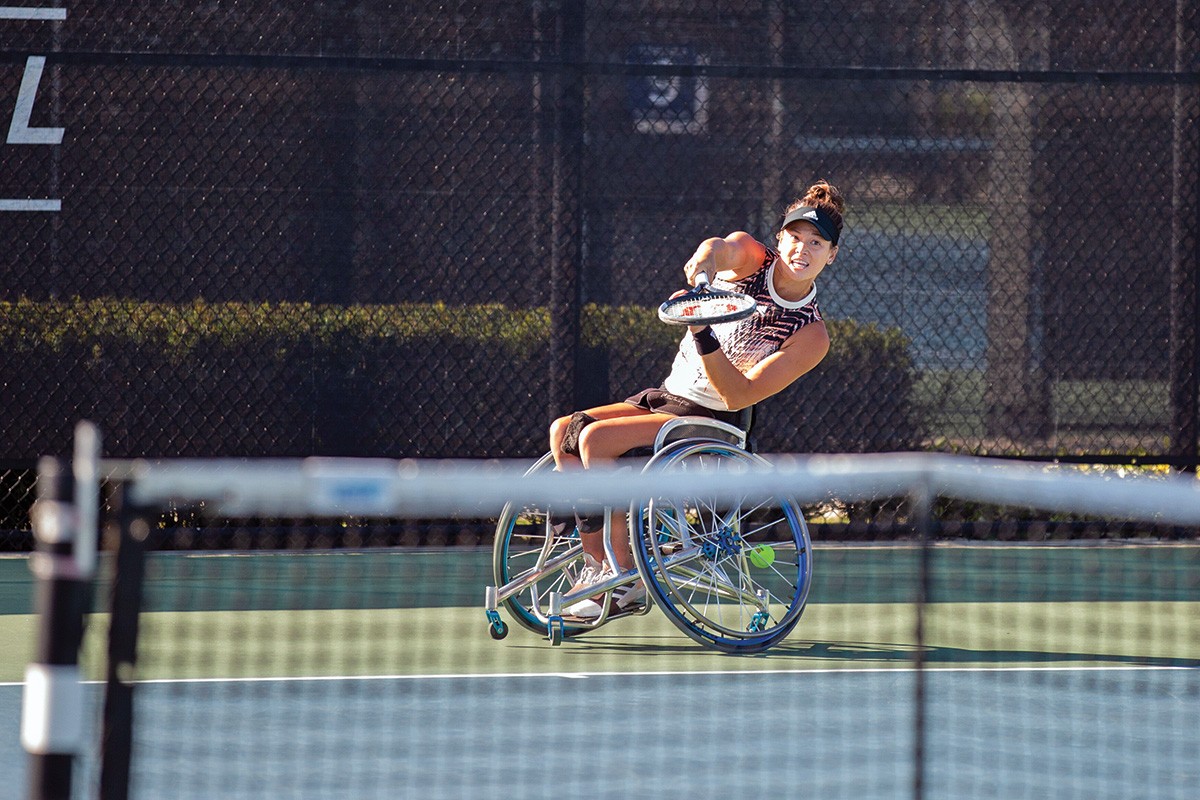 "I've had career high rankings. I have a Grand Slam title, which is crazy to say out loud," says Dana Mathewson. "In terms of my tennis career, it (moving to Lake Nona) was the best decision I ever could have made." 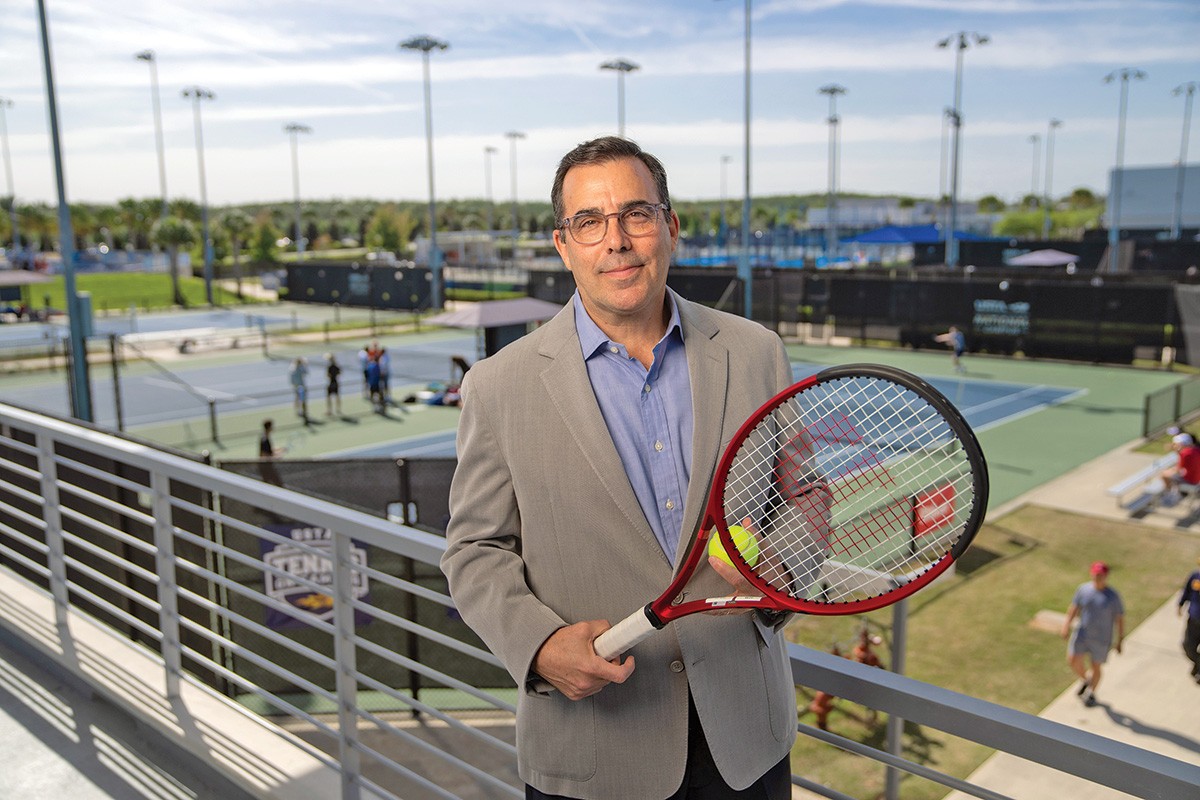 "On the elite players' side,' says USTA CEO and Executive Director Lew Sherr, the campus has "allowed us to provide support to so many more players than we ever could before at that level."

Tennis sees resurgence during the pandemic

The USTA National Campus in Orlando is working to make sure the rally continues.

It’s 90-plus degrees on a weekday morning in mid-July, but the 64-acre campus of the U.S. Tennis Association in Lake Nona is hopping. On 12 collegiate courts at the northeast corner of campus, summer camp participants are practicing serves and returns. Across the grounds in the tournament area, the nation’s top players in the boys’ 12-and-under division are battling it out in the national clay court championships. And inside the welcome center, younger summer camp players are milling about the pro shop and ducking into the Netpost Grill with their parents for a bite to eat.

The scene is exactly what USTA leaders had in mind when they opened the $63-million Orlando facility five years ago, says Lew Sherr, USTA’s CEO and executive director.

Before then, the USTA operated its headquarters out of an office park in New York with no on-site tennis facilities other than a pair of courts it shared with a local hotel. “The idea that the heart and soul of tennis in America was happening in an office park in Westchester County, as opposed to where we are today — look around you. You’re seeing kids play; you’re seeing professionals come through, college athletes, recreational players. You see the sport being delivered. It’s a great, great opportunity for us,” says Sherr.

As the national governing body for tennis, the USTA exists to grow the sport at every level — a mission that’s grown tougher over the past couple decades.

It’s not all doom and gloom though. “We have the most players in the top 100 of men and women in the world,” says USTA spokesman Tom LaDue — and the next generation of tennis greats is coming up through the ranks. And even as the sport struggles to regain a champion foothold, the COVID-19 pandemic has provided an unexpected boost, fueling a resurgence in recreational play of a game that has social distancing baked into its design. Tennis acquired nearly 5 million new players between 2019 and 2021, when 22.6 million Americans took to the court — and the USTA National Campus is doing everything it can to make sure the rally continues.

Getting younger players hooked on the game is part of the strategy. A section of campus called the Nemours Family Zone, for instance, features eight junior courts designed to help kids as young as 3 and 4 years old pick up the game more easily. While the traditional tennis court is 78 feet long, kids who are 8 years old or younger (and even some adult beginners) start off on the 36-foot courts, with smaller rackets and lighter balls that are easier to handle as they learn the fundamentals of the game.

The facility has also embraced other racquet sports that are growing in popularity. Last year, the USTA campus added four pickleball courts and offers clinics and camps for the sport, which combines aspects of badminton, tennis and table tennis and uses a wiffle-like ball. Nearby are four padel courts. The fast-paced sport of padel — popular in Latin America and Spain and starting to take off in the U.S. — borrows from tennis, racquetball and squash and is played in an enclosed court with glass walls.

For their world-class players, the center features eight acrylic cushion courts, six red clay courts made from 450 tons of imported Italian red clay and six indoor courts. Athletes in the program have access to a full workout center and receive medical attention from trainers and doctors on site. Anywhere from 12 to 40 athletes are on campus each day training.

Technology permeates the campus. Twenty- six courts are outfitted with cameras and equipped PlaySight technology that can record, track and analyze each game, essentially turning each court into a “smart court.” Eighty-four of the facility’s 98 courts allow for livestreaming so that friends and family who aren’t on campus can watch a match. Jo Wallen, senior director of the campus, says USTA Player Development also has an analytics team that condenses three-hour matches down to 30 minutes to gather intelligence on opponents and gain insight on how American players can improve their performance.

“If they’re playing against (Romanian tennis player) Simona Halep, our analytics team has done enough of Halep’s matches to know that on deuce, every single time, she’s serving out wide, for example, so the player knows what’s going on,” says Wallen. The only thing the analytics team won’t provide is reports on Americans who are playing other Americans.

With its offerings, the facility is attracting a growing list of high-caliber athletes, including several who’ve chosen to call Lake Nona home.

Catherine Cartan “CiCi” Bellis and her family relocated to Lake Nona around the time it opened in 2017 so she could train at the center. She reached a career high ranking of 35th in the world in 2017 — the same year she was named WTA Newcomer of the Year. She earned $1.4 million before an arm injury forced her to retire in January. Her fiancé and fellow tennis prodigy, Sam Riffice, also moved to Lake Nona with his family when the campus opened. Riffice — whose mother, Lori Riffice, is a national coach for USTA’s player development division — recently graduated from the University of Florida, where he led UF to its first national tennis championship win in 2021 (the same year he won the NCAA Division I singles championship), and he’s currently training at the USTA to transition to the professional circuit.

Among the most recent success stories is Dana Mathewson, a top-ranked American wheelchair tennis player who moved to Lake Nona in early 2020 to improve her game. At the time, she had been thinking of hanging up her racquet, but after completing a master’s degree in audiology, she decided to work with the coaches and staff at the national campus to see how good she could get — and she got good. Real good, in fact, winning the women’s wheelchair doubles title at Wimbledon in July, becoming the first American woman in the sport to win a Grand Slam title.

Mathewson, a San Diego native who took up tennis at age 13 but never had much in the way of formal coaching or training, says she’d originally only intended to stay at Lake Nona through the fall of 2020, when she was set to compete in the Tokyo 2020 Paralympic Games — but when the games got postponed for a year, she decided to continue training at the campus, which she describes as a sort of “Disneyland for tennis players.”

Sherr says the new campus has also transformed the way the non-profit organization operates. “It has allowed us to get so much closer to the delivery of the game to test and learn, to try new formats and research. On the elite players’ side, it’s allowed us to provide support to so many more players than we ever could before at that level,” Sherr says.

Before the national campus was built, the organization might have to rent space at other academies and might be limited to working with just 12 players at a time. Today, USTA can bring all the best 14-year-old boys or 16-year-old girls from around the country on any given weekend, along with their coaches to provide supplemental coaching as well as give them an opportunity to play against one another — a key element of developing player talent and building camaraderie on Team USA.

The venue is also enabling the USTA to do better grassroots work. “USTA exists to grow the sport of tennis, not because we’re tasked with developing Olympic champions or the next great professional players — that’s part of it — but we’re a health and wellness organization,” he says. “We want to be welcoming and accessible to all. You’ll see the courts are some of the least expensive courts you could ever rent, and the youth courts, we don’t charge for because we want to make sure that any kid who might be inspired to pick up a racket has an opportunity to do that.”