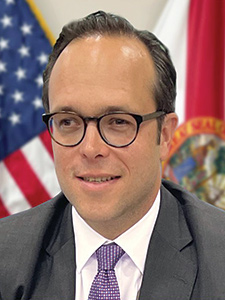 Pedro Allende, Secretary of the Department of Management Services

Former U.S. Department of Homeland Security official Pedro Allende has been appointed Florida’s new Secretary of the Department of Management Services, which is tasked with overseeing cyber-security for state government and administering tens of millions of dollars in new funding for government cyber-resiliency programs.

Gov. Ron DeSantis announced Allende’s appointment just weeks after signing a new state budget that provides funding for modernizing cybersecurity protection at state agencies and for local governments. Allende, an attorney, has been a member of Florida’s Cybersecurity Advisory Council since September 2021. In addition to overseeing the state’s IT infrastructure, the Department of Management Services is the business arm of Florida government.

Allende, of Miami, practiced law at Boies Schiller Flexner, where he co-founded the firm’s data privacy and cyber-security practice. Allende earned his bachelor’s degree in economics, master’s degree in decision and information science, and law degree from the University of Florida. He has served as an adjunct professor at the college, teaching a course on cybersecurity and cyber-crimes.