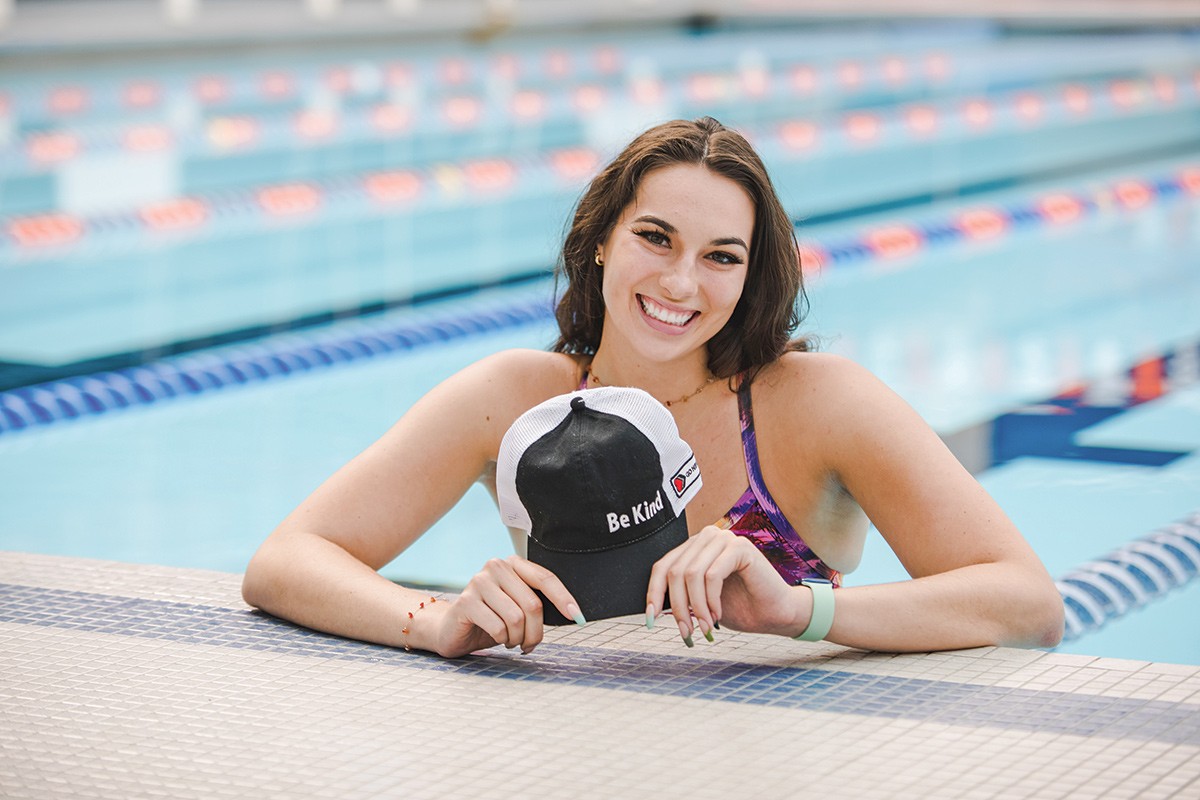 Despite being early to the endorsement game, University of Florida swimmer Vaness Pearl, like most Florida college athletes, has had only small endorsement deals amounting to less than $1,000. 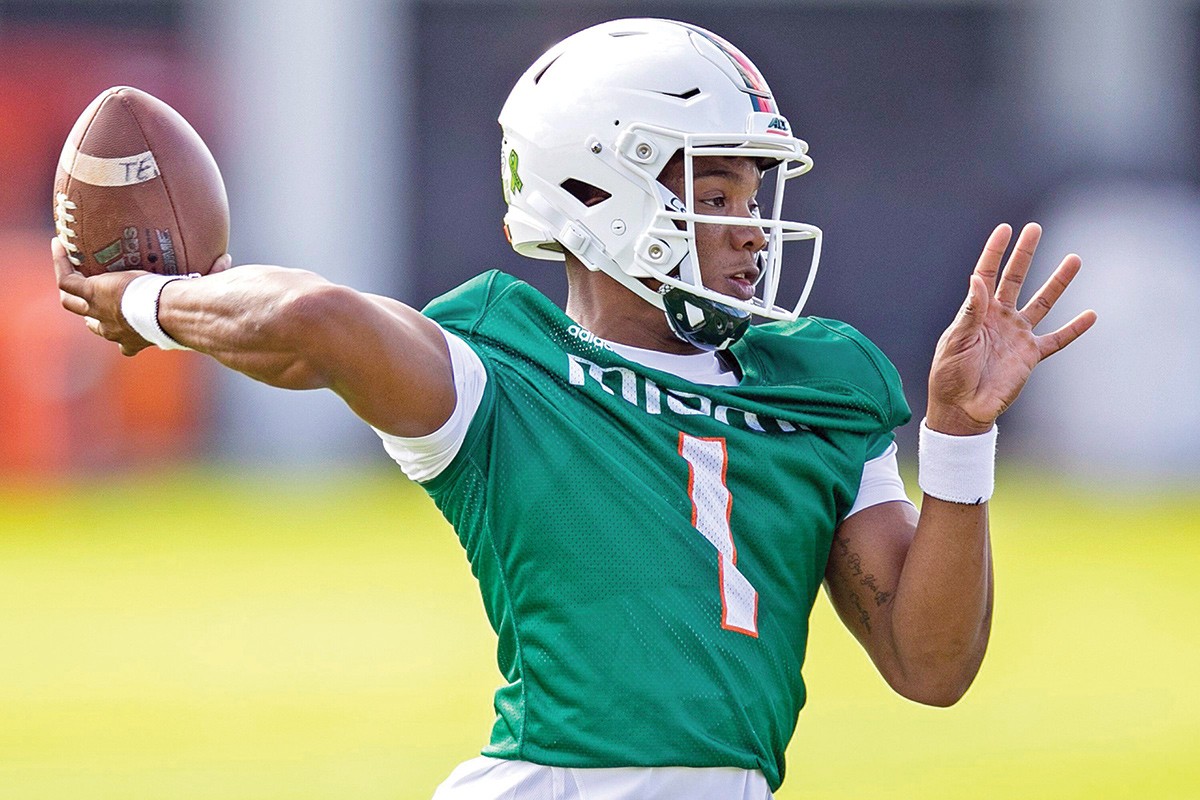 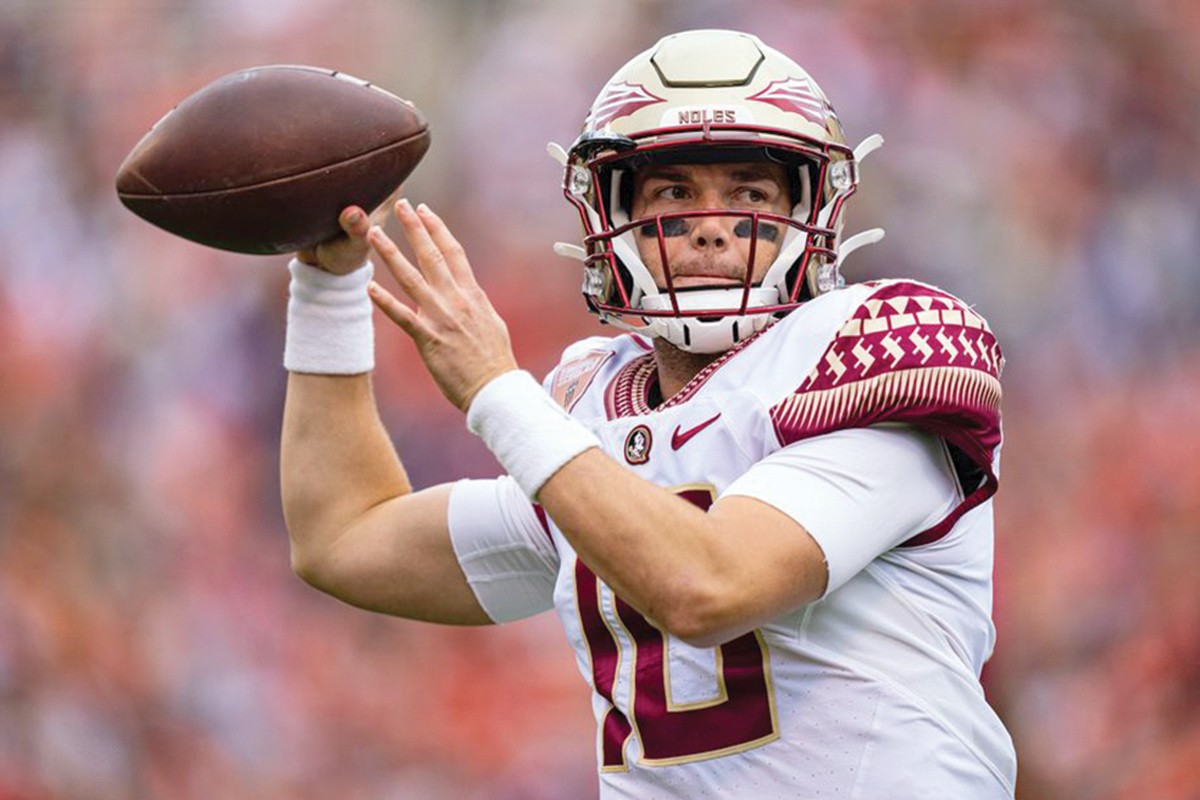 McKenzie Milton, the former UCF and FSU quarterback who co-founded Dreamfield Sports, says: "More than anything else, we wanted to be an advocate for student athletes." 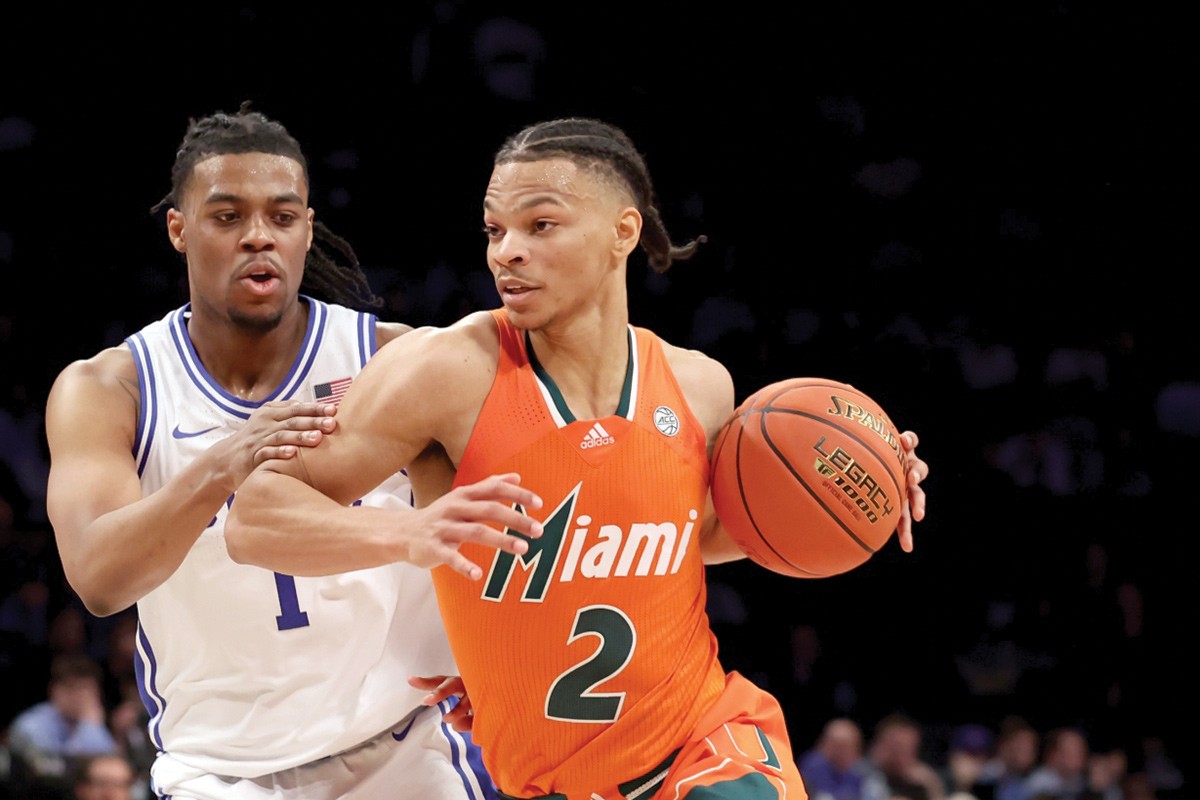 After leading the team to this year's Elite Eight, the University of Miami basketball star Isaiah Wong threatened to transfer unless his name, image, and likeness compensation increased. 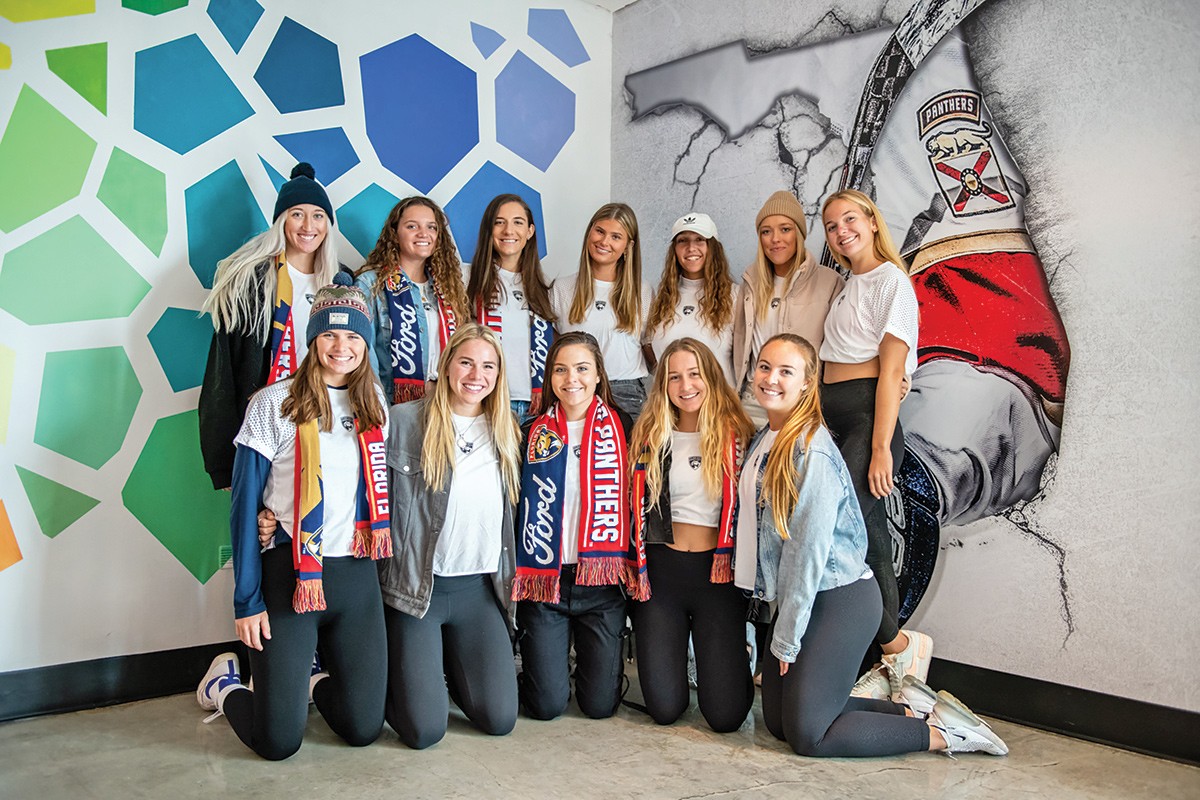 The Florida Panthers signed FAU's more than 200 female athletes in an endorsement deal through Dreamfield. The NHL team paid the women to attend games and engage with fans on social media. 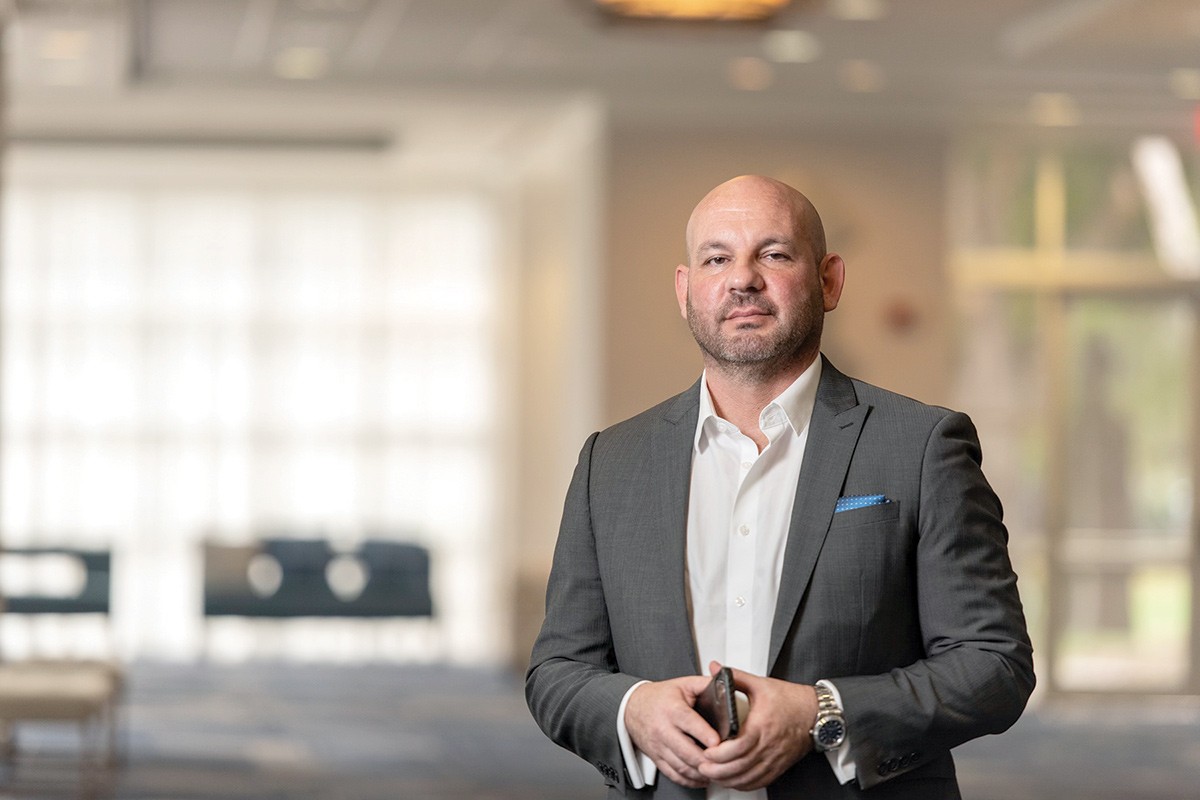 Because compensation can’t be tied to performance or playing at a particular school, a company can’t ask for its money back if the athlete transfers, gets injured or benched. And, “you’ve got to realize you’re signing contracts with kids,” says Michael Elkins, a Fort Lauderdale labor, employment and sports law attorney.

Now free to sign endorsement deals, college athletes are finding the road to early riches is not what it seems.

Gator swimmer Vanessa Pearl positioned herself last summer in the starting block of financial opportunity. Beginning in July, collegiate athletes in Florida could for the first time profit from their fame. Seizing the moment, the junior marine science major reached out for endorsement deals to brands she felt shared her values on sustainability and other issues. “I was ready,” she says.

Pearl plunged into a new industry whose first year has been marked by paydays large and small, and a raft of startups looking to capitalize on taking a slice of the endorsement proceeds paid to collegiate athletes — where they can earn money modeling, hosting podcasts, attaching themselves to a sports camp, touting a brand on social media, signing autographs or making personal appearances.

“It’s kind of like the wild, wild West right now,” says McKenzie Milton, a Florida State University quarterback, who would be wealthy indeed if he had a nickel for every time someone made that analogy.

The new era was ushered in by a unanimous U.S. Supreme Court in 2021 against the NCAA over its rules on the tangentially related issue of limits on education-related compensation for student athletes. Florida’s Legislature just the year before had voted to allow athletes to be compensated for use of their name, image and likeness (NIL) rights and scheduled the law to take effect July 1, 2021. Between the Supreme Court decision and the new laws being adopted in Florida and other states, the NCAA caved on its prohibitions, keeping in place only its ban on recruiting inducements — pay-for-play — and pay-for-performance. Florida’s 11,317 Division I, II and III athletes — and a half-million athletes nationally — could begin cashing in. Just like their counterparts in the pros, they would get a check from a business — or a free meal or merchandise or a car — and be responsible for the taxes on it.

A large number of athletes nationally showed no interest. Others did well, at least initially. At the stroke of midnight July 1, the day the law went into effect, University of Miami quarterback D’Eriq King, a hot commodity, signed deals with Tampa-based College Hunks Hauling Junk and Murphy Auto Group. The pay wasn’t announced, but the businesses were able to claim being the first to sign a college athlete. Later in Tallahassee, Milton, who had been a star quarterback at the University of Central Florida before transferring to FSU, signed a deal with Miller’s Ale House at a news conference with then state education commissioner Richard Corcoran and state Rep. Chip LaMarca, who sponsored the bill making endorsements legal.

Both athletes built on that promising start. King and Milton joined with veteran business-people to become co-founders of Dreamfield Sports, a platform for connecting businesses and athletes. “More than anything else, we wanted to be an advocate” for student athletes, Milton says. “The day and age is changing in college sports.” Milton missed two seasons at UCF recovering from a catastrophic knee injury before transferring to FSU. He won the 2021 Mayo Clinic Comeback Player of the Year Award and Atlantic Coast Conference Brian Piccolo Award as the conference’s most courageous football player. At age 24, he says, he had his first true introduction to the business world, including personal income taxes.

On the field, however, both men’s fortunes took a turn. King was injured and was out after September. Milton started just four of the Seminoles 12 games, and the team had a losing record. Observers of the industry say both men would be worth more in endorsement deals if their seasons had gone the other way. Milton says of his compensation, “It hasn’t been life-changing money.”

Media and fan attention naturally focuses on big deals — cars for quarterbacks, for instance — in the major revenue-producing sports. Football players at Florida State, UF, UCF and Miami, for example, can opt-in to a custom jersey program from sports merchandising company Fanatics through OneTeam Partners, a group licensing firm.

Unfortunately for Pearl, the UF swimmer, the businesses she targeted weren’t as ready for the new era as she was. How to value her name was a puzzle; Pearl accomplished much as a swimmer but has no national title. The Instagram equivalent of cold calling proved hard. She got, for her efforts, one small deal, some nibbles and nothing else. “I quickly realized it is very hard to do on your own,” she says.

For most athletes, the payday has turned out to be a restaurant meal, some merchandise or something of equivalent value. Media site Athletic Director U, using data from content and compliance platform INFLCR (pronounced influencer) reported that in the first six months of the new era, of 5,000 transactions tracked, the average was $1,335, but that’s skewed by a small number of big-dollar deals. The median transaction was $63.

One twist of the new era is that an athlete’s standing as a social influencer on TikTok, Instagram and other social media is a determining factor in landing endorsement deals — more so in many cases than the prominence of their college or sport. “The first question we get from brands is, how many Instagram followers do they have?” says Corey Staniscia, a former aide to legislation sponsor LaMarca and now Dreamfield’s external affairs director.

The influencer economy opens the financial door for athletes who don’t play on network TV on Saturdays. “Our conception of what is a revenue-generating sport is changing,” says Malik Jackson, an attorney with Smith Hulsey & Busey in Jacksonville. At Florida Atlantic University in Boca Raton, the first big deal was offered not to football players but to its more than 200 women athletes. The NHL’s Florida Panthers, working through Dreamfield, paid the women athletes to attend games and engage with fans on social media. The arrangement led to substantial free media attention in August — not a month when hockey teams make the sports news lead — as the first pro sports team to do a deal with college athletes. Panthers chief strategy officer Sam Doerr says the Panthers wanted to reach new audiences and have made an investment in time and resources overall and plan to continue.

Speculation abounds on what the new era will do to college athletics. The consensus is that high school students now will factor potential endorsement money into where they commit — along with traditional considerations like who’s winning the facilities arms race and TV exposure. “It becomes a recruiting tool,” says sports business attorney Ed Schauder, a securities and corporate attorney at Nason, Yeager, Gerson, Harris & Fumero in Palm Beach Gardens. Sports news site the Athletic reported that an unidentified high school junior snagged a deal that will pay him up to $8 million over the course of his college career.

In September, Florida State lost the nation’s top overall recruit, cornerback Travis Hunter of Collins Hill, Ga., to Jackson State in Mississippi, prompting unverified yet persistent rumors that Hunter was getting a more than $1 million endorsement deal from New York-based Barstool Sports, for whom Jackson State head coach Deion Sanders is a content creator. Florida State defensive back Jarvis Brownlee, reportedly unhappy about how one deal turned out, transferred to Louisville after sitting out spring practice. There’s theorizing aplenty about whether traditional football powers that play in small college towns will find stronger competition for recruits from colleges in major media markets.

Player advocates respond: So what? “If you’re a university and you need to get better at it, get better at it. This is the free marketplace. It’s a good thing for the athletes,” says Michael Elkins, a Fort Lauderdale labor and employment attorney. Given the risk of career-ending injuries and given that only a fraction of athletes make the pros or Olympics, it’s only fair, the argument goes, that college players make money while they can. “You want to strike while the iron is hot,” says attorney Jackson.

UF’s Pearl medically retired this year after enduring more than a decade of severe sinus problems from swimming. The 22-year-old has found new opportunity outside the pool in one of the new players in the new industry, a national marketing platform called MarketPryce, co-founded by UF alum Jason Bergman. Athletes pay a membership, starting at $8 per month, and then choose which brands to sign with and promote on social media. She chose Silk & Sonder, a monthly wellness planner and subscription journal service, Gaelle Organic and motivational product company Go Heart. That company pays athletes to devise a slogan for a hat — Pearl’s was “Be Kind” — and promote it on video and on social media. The company puts 30% of the profit into the influencer’s charity of choice. In Pearl’s case, that’s an animal rescue group she volunteered for in high school in her Texas hometown.

“It is so much easier to work through MarketPryce than having to go out on my own to find a business,” says Pearl, who has made less than $1,000 from her endorsements. “I kind of got excited again. As an athlete, this is all very new.”

McKenzie Milton, above, a quarterback at UCF and later FSU, and University of Miami quarterback D’Eriq King, right, founded Dreamfield Sports, which connects businesses with athletes for endorsement deals. “More than anything else, we wanted to be an advocate” for student athletes, Milton says.

Because compensation can’t be tied to performance or playing at a particular school, a company can’t ask for its money back if the athlete transfers, gets injured or benched. And, “you’ve got to realize you’re signing contracts with kids,” says Michael Elkins, a Fort Lauderdale labor, employment and sports law attorney. “These are students, 18 to 22,” he says. “As kids will do sometimes, they do dumb things.”